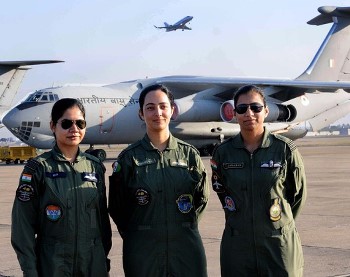 Are women in India making progress? Yes, absolutely, and some trends—such as the number of female airline pilots—will astonish you. But not surprisingly, the story of women’s progress in India is complicated.

When I was at school in Mumbai in the late 1960s, a survey was conducted in selected schools around the world. My school was picked, and so we 11- and 12-year olds were presented with a number of riddles to solve. The purpose was to study attitudes to gender, but that was deliberately not explained.

I do not remember much about the test, but one question has stayed in my mind. Respondents were told a story that ended in a riddle: A man is driving an automobile with his father and has a serious accident. The father is critically injured and is rushed to the hospital. The man, who is uninjured, is waiting anxiously outside the operating theatre when a white-coated surgeon comes out, embraces him, and weeps, “My son, my son.” The question was, how could this be?

Many were nonplussed. Had the father made a miraculous recovery? Or had he died on the operating table and was this now his ghost?

The answer, of course—and it may seem obvious today—was that the surgeon is his mother. Indian students, in a country where the first woman doctor graduated in the 1890s, had little problem with the riddle in the 1960s—over 90 per cent of us got it right. But, in other countries, the figures were very different. In Sweden some 30 per cent answered correctly, in the UK only 12 per cent of the students could figure out the response, and in the United States the number of right answers dropped to about 5 per cent. The students were not stupid; they simply could not conceive of a woman surgeon.

I was reminded of this episode when I came across a report of the International Society of Women Airline Pilots; India has one of the world’s highest percentages of women piloting commercial airliners. Across the world, as a whole, only one out of every 20 flights is likely to be flown by a woman. In India, it is double the world average.

There are 1,092 fully-qualified women pilots in India—12.41 per cent of the total number of 8,797 desi pilots. What is even more striking is that this figure has doubled in four years since 2014, and it may well double again by 2022.

The global average stands at 5.47 per cent. Only 8,477 pilots of the world’s 154,957 are women. India alone accounts for 13 per cent of them. India has more female pilots than most Western countries, and 50 per cent more than China, which has just 713 women holding a commercial pilot’s license.

Our individual airlines come out looking very good, too: 5.9 per cent of British Airways pilots, and 7.4 per cent of United Airlines, are women; the corresponding figure for IndiGo is 13.87 per cent. These three airlines each have the highest percentage of women pilots in their respective countries.

What is remarkable about all this is not that India represents some global paragon of enlightened gender mainstreaming. We have to admit that we have several deficiencies: our women are often condemned to drudgery and exploitation, and are underpaid. But we can call it the Indian paradox. We have had some of the first, best, and most of the world’s women lawyers, CEOs, advertising agency heads, doctors, pilots, and political leaders. The first woman to earn an Oxford lawyer’s degree was an Indian, Cornelia Sorabji. One of the first women heads of a democratic government in the world was Indira Gandhi.

After all that, flying a plane should be a breeze.

Shashi Tharoor, a former U.N. Under-Secretary-General and former Indian Minister of State for Human Resource Development and Minister of State for External Affairs, is currently an MP for the Indian National Congress. This article was first published in The Week, an India-based magazine. Reprinted with the author’s permission.