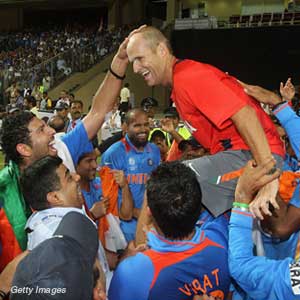 What made it possible, and does this mean a new era of Indian dominance?

The concluding shot of the 2011 cricket World Cup final—a powerfully struck six by the Indian captain Mahender Singh Dhoni off Sri Lanka’s Nuwan Kulasekhara – sealed India’s fairytale World Cup win in a rare, magnificent style that was far more exciting than a fictionalized climax of a Bollywood film. And with it, a nation of a billion people erupted in ecstasy and euphoria, having held their collective breath for 28 long years since India’s last World Cup victory.