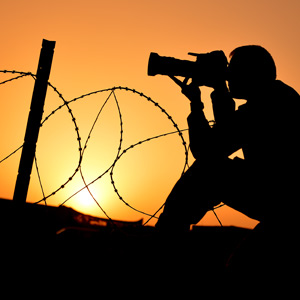 (Photo: courtesy of the U.S. Army)

Reporting on wars, disasters, and epidemics is not an obvious career choice for Indians. So, what motivates journalists like Anjan Sundaram, Moni Basu, Anuj Chopra, and Prashant Rao to forsake cushy, desk-bound jobs—not to mention the safety of home—and travel to distant, often dangerous corners of the world to do just that?

Deep in the heart of the Democratic Republic of Congo, Anjan Sundaram, stringer then reporter for the Associated Press, is marooned in the small riverside town of Irebu. A riverine journey is indefinitely delayed by a mechanical failure on the barge he rode from Kinshasa, the capital city. One day, a family of three pays him a visit. Sundaram writes [in his memoir, titled Stringer: A Reporter’s Journey in the Congo]: “The visitors were poorly dressed and without slippers. The skin on their feet was so cracked that it looked like dried clay. The father was the only one who spoke. He seemed simple enough, until he asked me to make his girl speak. She had been mute from birth, and he had heard of Indian magic….This was the reputation the Indians had in the country.” 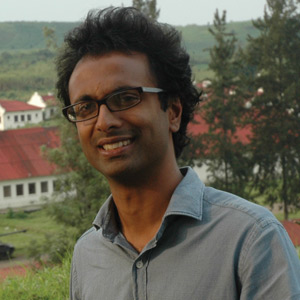 When Anjan Sundaram left for Kinshasa, he was 22, with a graduate degree in mathematics from Yale and a job offer from Goldman Sachs. “The beauty in America and in mathematics had become cloying,” he writes in his memoir, which is based on the two years he spent reporting from the Democratic Republic of Congo. Inspired by the works of Ryszard Kapuscinski, the renowned Polish war correspondent and author, Sundaram spurned the comforts and luxuries of academic success to explore the planet’s conflict zones and the world’s deadliest wars. 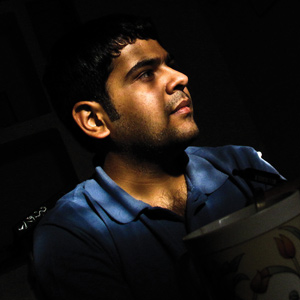 Anuj Chopra, 31, currently an AFP [Agence France-Presse, a global news agency] news editor stationed in Hong Kong, says that “like millions of Indian kids subtly brainwashed by their parents,” he, too, was persuaded to get a college degree in an area with strong career prospects, like engineering. And so he did. But he hated it and began freelancing for newspapers such as the Asian Age and Tehelka while in college in India. And, when a New York Times reporter needed some help with an assignment, he missed several days of classes to travel around the country with the reporter. Needless to say, he got into trouble with his parents and college, but “somehow managed to complete my degree and started working full time as a freelance journalist the day I stepped out of college.” He started traveling around the country producing his own stories and six months into his nascent journalism career, he won an award from CNN for a feature on communal ghettoes in Mumbai.

Sundaram never set out to be a journalist or a writer, much less report from the Congo. But he always nurtured an itch to go to closed places, like Iran. When he shared his desire with his parents, they promptly turned him onto a friend––the Indian Ambassador to Iran, who advised him against it. In the end, though, he quips, “They might have been happier had I gone to Iran rather than Congo.” 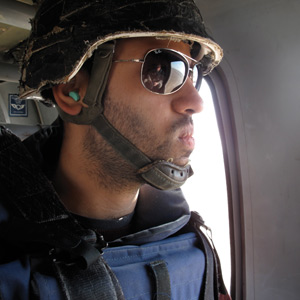 Prashant Rao, until recently the Baghdad bureau chief for the AFP, had always known that he wanted to be a journalist. He grew up in Hong Kong and attended university in London. One of the best pieces of advice he received was from his father, who told him, “If you want to be a journalist, do not study journalism.” Prashant studied government and history at the London School of Economics, took reporting jobs with the Bloomberg News in London, and later moved to Baghdad in Iraq with the AFP. 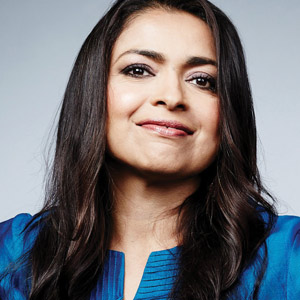 Moni Basu, a reporter at CNN (and formerly at The Atlanta Journal-Constitution), became a journalist in India at a time when it did not carry the cachet that it does today. Basu says, “I became a journalist when it wasn’t really cool for Indian women to become news reporters. There was all that desi pressure to study the hard sciences. In my circles, journalism was looked down upon as a profession.”

Moni Basu was left on the steps of an orphanage agency and adopted when she was only seven days old. Her circle included a statistics professor for a father and the filmmaker Satyajit Ray for a family relative. As a child, Moni Basu traveled a lot with her parents—she got her first passport when she was one—and lived in Australia, Beirut, the U.K., and the U.S. “I always wanted to join the diplomatic corps. But on my 20th birthday, my mother suffered a massive stroke and her illness set me on another life path. I began writing part-time for a small, community newspaper and loved it so much that I ended up becoming the executive editor.” Although not a deliberate choice, she eventually fell in love with journalism and reporting.

Sundaram moved to Congo in 2005, at a time when conflicts continued to rage in the eastern part of the country and only three foreign reporters had been posted to cover a region whose wars had by then cost more than 5 million lives. But why move to Congo? Says Sundaram, “I had been brought up to think that places like Congo are not examples you want to emulate. They are failures…or failing. Growing up, my dad would ask me, where would you like to live? Would it be Europe or America? These are the places that have succeeded and places where you would want to live. So, more than as a rebellion, it was about expanding my world view.”

For Chopra, the 2002 riots in Gujarat spurred him towards journalism. Chopra has since gone on to report on conflicts in Syria, Afghanistan, Burma, Sri Lanka, and the Maoist insurgency in India. His family, he says, did not take his foreign war reporting jaunts too well. “When I went to Syria last year, my folks were constantly glued to Al Jazeera—which is hilarious because you won’t otherwise find them glued to news channels. I tone down the risks at play, sometimes completely hide the risks involved, but my folks are smart and they put two and two together. But they also understand that journalism is a passion and they are a huge pillar of support.” 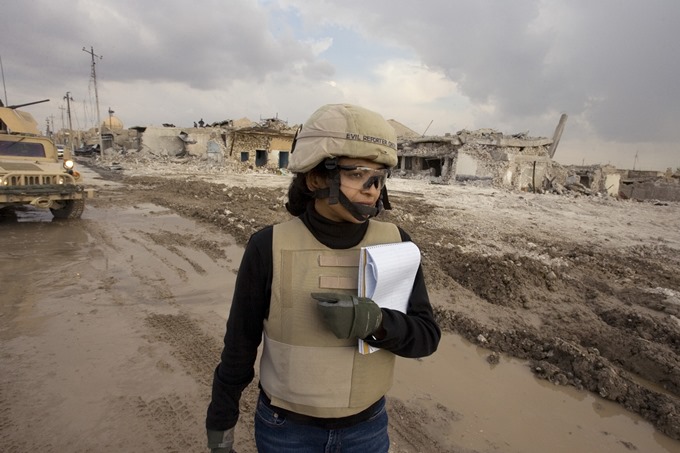 Moni Basu has reported from the frontlines of war, conflict, and natural disaster in Kashmir, Iraq, Haiti, Gujarat, and Odisha. Witnessing human misery put things in perspective for her: “It’s also difficult losing people you get to know so well or having to return home and adjust back to a comfortable existence in Atlanta. A lot of things in life began to feel mundane to me. I saw everything through a lens of life and death.”

How does being Indian affect the reporting? There’s much love and admiration in Iraq for all that is Indian, Prashant Rao suggests. He was once waiting to meet an Iraqi official, who upon learning that Rao was Indian, immediately burst out into “Amitabh….Gabbar Singh!” “Those were the only phrases he could share with me [without the need for a translator],” Rao says.

For Sundaram, being Indian in Congo meant being able to walk into Indian-run stores and immediately plug into the local network. In Stringer, he writes extensively about Indian communities’ uneasy and mostly transactional relationships with the locals. Sundaram argues, “Exploitation of Africans by Indians is undisputed and very real. I would try to get my Congolese friends jobs at Indian companies. But they would tell me, ‘I would prefer not working rather than working in an Indian-run factory because I know they are paying me peanuts and treat me badly.’ I would hear these stories, and I think they’re not completely unfounded.”

But as an Indian, Sundaram was able to draw on shared colonial histories to connect with the locals: “Coming from a colony gave me a different perspective on Congo than, say, from a colonizer. There was much sympathy and empathy between myself and the Congolese.” And, he adds, Indians migrate to places where few people would go. They build businesses, stimulate local economy, and so, “this is something that needs to be celebrated.”

As an Indian-born reporter representing an American news agency in Iraq, Basu says she had to “go an extra mile” to gain the trust of American soldiers. That meant “drinking really bad coffee with them late into the night and going out on many, many combat missions with them.” But, echoing Prashant Rao’s experiences, Moni Basu was always able to connect with Iraqis on shared cultural heritage. Basu says, “They saw me as someone they could trust because I was from that part of the world. They [Iraqi families] saw me as an Indian woman first, American journalist second. And it was very helpful.”

Chopra’s Indianness allowed him to blend in with the local crowds on his reporting trips to Afghanistan. “I can grow a beard and wear a pathani suit and that helps me melt into the crowd like the locals—without attracting attention the way a Westerner would,” he says. But, he adds, as a journalist, one needs to be invisible and allow the story to enjoy center stage.

Sundaram, Chopra, Basu, and Rao love what they do and do what they love. They exemplify all that is enduring about the human spirit—to reach beyond one’s comfort zones, to test the limits of one’s capacities, and to champion the cause of the marginalized.

In 2006, elections were held in the Congo to bring to an end decades of war between government, militia groups, and opposing political factions. Sundaram was on the front lines of the elections and the ensuing conflict. “In the air a shrill humming noise grew progressively louder and ended with a thunderous crash a few feet from the compound: mortar bombs, launched high above us,” he writes, adding, “I filed nonstop, via tel phone; the AP wanted every last detail. I had finally lived the story—lived some part of the sentiment of experiencing the war, and some part of the terror.”

Life in the West is a blessing in most ways. The mundaneness and certainty of everyday life—electricity, running water, paved roads, and rule of law—permits the greater luxury of dreaming and doing bigger and better. War correspondents like Sundaram, Rao, Chopra, and Basu remind us that mundaneness is a luxury, and certainty, ephemeral.