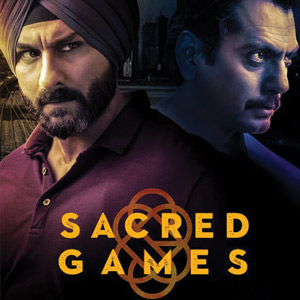 Netflix’s first Indian series—riding on powerhouses like Anurag Kashyap and Vikramaditya Motwane as co-directors, and Saif Ali Khan and Nawazuddin Siddiqui as the archetypical good guy/bad guy leads—is an artfully crafted, if sometimes demanding, immersion into the dark underbelly of Mumbai’s underworld. Sounds clichéd in a world full of noir thrillers? Fear not, the series, with its unique story-telling device, offers so much more, albeit not for those of faint sensibilities.

Sacred Games? Now that’s a cheeky title for a series where absolutely nothing is sacrosanct—not even God! From the opening scene, the series pushes the envelope on gruesome—a treat for those who like this genre of crime, corrupt cops, mobs, mafia, mystery, macabre, and mayhem. 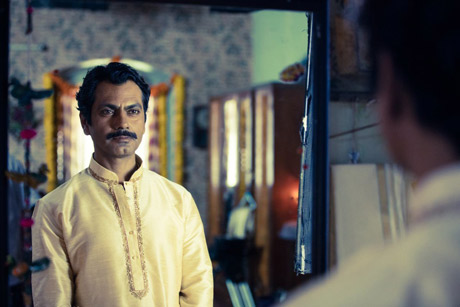 (Left) It is Siddiqui’s Gaitonde, a devil with a God complex, who steals the show.

“Bichchoo hai apun ki kahaani, chipak gai apko” (“My story is like the Scorpion, and now it’s stuck on you”), says Ganesh Gaitonde, the lead badass, a notorious criminal whom the cops had presumed dead—clearly setting the tone in the first episode. Gaitonde’s story, says Mike Hale in the New York Times, is “an epic that combines his own rise as a gangster with a social and political history of India, and a critique of the country’s religious, caste, and economic divides.”

Gaitonde had come to ‘Bammbaii’ to become a big shot in the city of dreams. Big shot he did become—in all the wrong ways. A murderer, and a don who could go to any extent, Nawaz as Gaitonde is the main stuffing in the parantha called Sacred Games, with added butter flowing throughout, making the series all the more delectable. 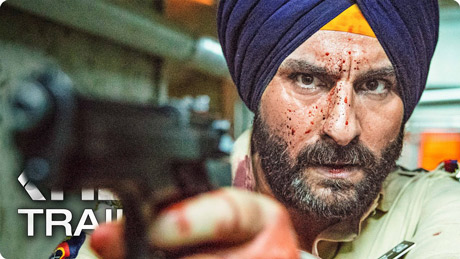 Saif Ali Khan (right) as Sartaj Singh, the earnest cop, gives one of his finest performances.

Saif Ali Khan as Sartaj Singh, the earnest cop, gives one of his finest performances. His haplessness at the misuse of power, built-up frustration, and urge to set things right, all look genuine and honest. The genesis of the cat-and-mouse games between Sartaj and Gaitonde is a phone call from Gaitonde alerting Sartaj of a threat so massive that it would destroy the city, that was to take place in 25 days. 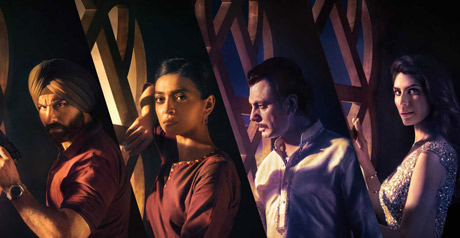 A delectable cast of characters, each with compelling stories of their own, intertwine with the cat-and-mouse games of Sartaj Singh (Saif Ali Khan) and Ganesh Gaitonde (Nawazuddin Siddiqui).

RAW agent Anjali Mathur (pictured second from left) (played by Radhika Apte) adds texture through her subtle acting prowess. (The Research and Analysis Wing or RAW is the foreign intelligence agency of India.) Her exasperation to prove her mettle and question the male dominance of society is reflected when she enquires, “Mard field pe kaam kare to passion, aurat krna chahe to bhoot?” (If a man wants to work in the field [as a crime fighter], it is considered passion, but if a woman wants to go out in the field, she is considered a spook?)

Each character is beautifully etched, leaving a lasting impact. Kukoo (Kubra Sait) (pictured above, far right), playing a transgender dancer is one such character. As Gaitonde says, “Tuje dekhte toh sab hain, tu kisi ko nahi dikhti.” (Everyone looks at you, but no one sees you.) The makers bring forth the myriad of emotions, turbulence, and pain lying beneath the effervescent face. I literally had goose bumps when Kukoo bares her innermost feelings.

Actress Geetanjali Thapa as Nayanika mirrors a hypocritical society where a woman is treated as a goddess at one moment and as a sex slave at the very next.

The other characters such as Isa, Bunty, Parulkar, Katekar, Bhosle, Trivedi, and Malcolm, among others, add perfect essence to the platter touching upon different issues.

The ordeal of the minority is also well crafted. We see a woman playing a Muslim mother, and her suffering in search for her missing son is so well sketched that I, too, broke into tears.

The redemption of the show is that the moment you lose an iota of interest (which does happen at times), it grips you back with another unsolved riddle. The excessive usage of cuss word, nudity, and sex seem often unwarranted, with the effect of gratuitously objectifying women. Having said that, Kanta Bai (Shalini Vatsa), Gaitonde’s chief adviser, is as fierce and tough as the men are.

A perfect blend of melancholic and suspenseful background music by Alokananda Dasgupta elevates the intensity and sets the mood. The elements of noir film with low lighting, use of silhouettes, darkness, smoke, and dingy lanes produce some memorable shots.

The beautifully written dialogue and the even more beautiful delivery by the king of realism, Nawazuddin, give us gems, such as “Life mein apun ek cheez seekha hai sahib. Gaadi mein baitho, sochke swarg jaegi, jaati nark hai.” (In life, I learnt one thing, Sir. We sit in a car thinking we will go to heaven, but it always goes to hell.)

Season One left many a question unanswered, but there will be another season to douse the mystery.

In Gaitonde’s words, “Wapis aogey apun ki kahaani sun ne!” (You will come back to listen to my story!)

Nidhi Kumari is a freelance journalist based in Ghaziabad, India, with beats in film and entertainment.