Excerpt: The Rise of India's Bollygarchs 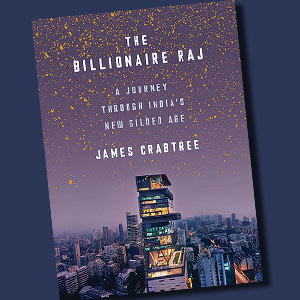 Only two nations—the U.S. and China—have more billionaires than India, according to the latest Forbes list. When billionaire wealth is taken as a proportion of national wealth, Russia’s oligarchs do the best, notes JAMES CRABTREE in The Billionaire Raj. But India’s Bollygarchs, known for their extravagant lives and intimacy with power, are no slouches. In fact, only the Russians are ahead in that regard. How did these Indian billionaires, who number about 119 and own assets worth $440 billion, create this super-rich club in such a short period?

The rise of the super-rich was propelled at first by domestic economic reforms. Starting slowly in the 1980s, and then more dramatically against the backdrop of a wrenching financial crisis in 1991, India dismantled the dusty stockade of licenses and tariffs that had protected its economy for a generation or more. Strict industrial rules controlling what could be made and by whom—a convoluted system sometimes known as the “License-Permit-Quota Raj,” or just “License Raj” for short—were scrapped. A clear-out began of companies cosseted under the old regime, via deregulation, foreign investment, and heightened competition. In sector after sector, from airlines and banks to steel and telecoms, the ranks of India’s tycoons began to swell.

Yet this growth was also intimately bound up in a larger global story. The early 2000s were the heyday of the “great moderation,” a moment when world interest rates stayed low and industrialized nations grew handsomely. China entered the World Trade Organization in 2001, kicking off one of the most remarkable expansions of any country in history. Booming Chinese exports, along with the demand for commodities they fueled, boosted other developing economies, including India’s. Bullish investors flooded the emerging world with cash, spreading the fruits of what some dubbed a new era of “hyper-globalization.”

It was in the mid-2000s that the fortunes of India’s tycoons really began to change. For all its drama, only a handful of sectors took off in the decade after 1991, including generic pharmaceuticals and software outsourcing. Over that ten-year period, India’s economy also barely grew faster than it had in the previous one. But in the early years of the new millennium the twin impact of liberalization and hyper-globalization became impossible to ignore. Pumped up by foreign money, domestic bank loans, and a surging sense of self-belief, industrialists like Ambani dumped billions into projects from oil refineries to steel mills. Others rushed to build toll roads and power stations, or spent heavily on Airbuses and broadband networks. Stock markets boomed. From 2004 to 2014 India enjoyed the fastest economic expansion in its history, averaging growth of more than eight percent a year.

These boom years brought undoubted benefits, helping over one hundred million escape from poverty. Just as importantly, they began to reintegrate India with the rest of the world. The Indian subcontinent had been the planet’s largest economy for most of the last two millennia. Three centuries of colonial rule ruined that legacy, as the East India Company suppressed and plundered southern Asia. In the late seventeenth century, when Britain controlled just a handful of coastal cities, India’s Mughal Empire presided over close to a quarter of global gross domestic product. That figure stood at four percent when the last British troops left, not long after Independence in 1947, the final battalion marching out through the grand basalt arch of Mumbai’s Gateway of India, just down the road from the apartment in which my wife and I would later live. Yet even under the yoke of imperialism, local merchants still sent plentiful cargoes to Liverpool and Manchester, while Indian capital coursed through the exchanges of the City of London. It was only after Independence that Jawaharlal Nehru, a cerebral Cambridge-educated lawyer and the nation’s first prime minister, began to abandon a heritage as a trading power that stretched back two thousand years.

The point is that these decades of self-imposed quarantine were the exception. India is now a remarkably globalized nation once more. Rather than struggling to scrape together foreign exchange, it holds hundreds of billions of dollars in reserves. It is on some measures a more open economy than China, which began to liberalize roughly a decade earlier. India now trades more goods and services as a proportion of GDP than its larger Asian neighbor, and far more than America. The value of that trade has rocketed from just seventeen percent of GDP when its economic reforms began 1991, to around sixty percent today. It attracts as much foreign direct investment as China did at the peak of its growth in the mid-2000s. Nearly half of all the freely traded shares on Indian stock markets are owned by foreigners.

India’s leading companies have spread out around the world, too, buying up everything from African mines to British steelmakers. Its citizens remain instinctive internationalists, boasting the world’s largest diaspora population and sending home more than $60 billion in remittances each year. The fear that India would reject the arrival of foreign companies and global investment, viewing them as akin to a new form of colonialism, has been handily disproved. Indeed, globalization remains strikingly popular. More than four in five Indians currently view it positively, among the highest rates of any country, reflecting the sharp improvements in basic living conditions most of its people have experienced since reopening.

Rather than fearing the world, India has embraced it. Yet for all their benefits, these decades of whirlwind growth have proved to be economically disruptive, socially bruising, and environmentally destructive, leaving in their wake what novelist Rana Dasgupta has described as a sense of national “trauma.” Those benefits have also undeniably been shared unevenly, with the greatest portion of India’s new prosperity flowing to its top one percent, or more specifically the top fraction of that one percent. For nearly a century prior to Independence, India was governed directly by the British under a system commonly known as the Raj, a term that takes its origin from the Sanskrit word rajya, meaning “kingdom” or “rule.” Then for the best part of the half-century after 1947 there followed the License Raj, with its perverse edicts and myriad restrictions. Now, in the quarter century after liberalization, and set against the backdrop of a world in flux, a new system has grown up in their place: the Billionaire Raj.

Excerpted from The Billionaire Raj: A Journey Through India’s New Gilded Age by James Crabtree © 2018. Reprinted by permission of Tim Duggan Books, an imprint of the Crown Publishing Group, New York. All rights reserved.

James Crabtree is an associate professor of practice at the Lee Kuan Yew School of Public Policy at the National University of Singapore. He was formerly the Mumbai bureau chief of the Financial Times.