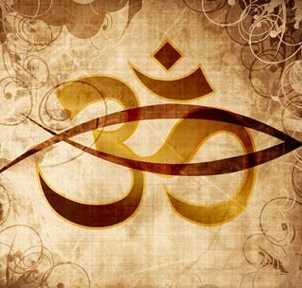 A professor of philosophy and religion at the University of South Carolina and a former United Methodist Minister, David Dillard-Wright writes about how he came into Hinduism, and his worship of Lord Ganesha. Dillard-Wright is also the author of Meditation for Multitaskers and the co-author of The Everything Guide to Meditation for Healthy Living, and 5-Minute Mindfulness. His newest book, published by Mantra Books, is called At Ganapati's Feet: Daily Life with the Elephant-Headed Deity.

I am the son of two United Methodist ministers and a former minister myself. I served rural congregations in areas surrounding Calhoun, Georgia and Crawfordville, Georgia by preaching weekly, serving communion, and visiting parishioners. As a child, I sang in the choir, went to church, and went to church camp in the summer.

My parents were ordained in the Southern Baptist tradition and became United Methodist due to the fundamentalist takeover of the Southern Baptist Convention. Talks about the Bible and church politics were common around the breakfast table, and I was raised with the assumption that the Christian religion was superior to all others. My parents never badmouthed other faiths, but I repeatedly got the message that only by accepting Jesus Christ could salvation be achieved. 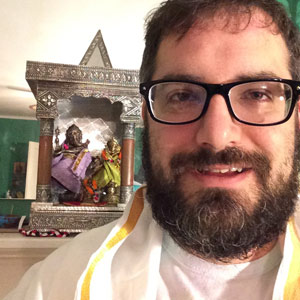 “I have to steal time to practice my devotions, since the secular world in which we live no longer values the blessings of the gods,” says the author.

I now consider myself a follower of Sanatana Dharma after a long process of conversion. “Conversion” doesn’t even sound like the right word, as I still believe in the divinity of Jesus. I just have the sense that I have entered into a more expansive religious space, one that can recognize some of the teachings of Christianity while also making room for other divine figures, like Ram, Sita, Lakshmi, Narayana, and Ganesha. Now my chief devotion is puja to Lord Ganesha, with the practice of other sadhana like the Devi Mahatmyam, the Rudrashtadhyayi, Hanuman Chalisa, Lakshmi Puja, and Shiva Puja. I practice mostly in the home, but I also attend the Augusta Hindu Temple and the local Unitarian Universalist congregation. I find myself on the bridge between two cultures, the southern United States Christianity of my birth and the Sanatana Dharma taught to me by my gurus, Swami Satyananda Saraswati and Shree Maa of Kamakhya, Assam, who are now based at Devi Mandir in Napa, California.

I find myself wondering about the meaning of ethnicity, since I now feel as Indian as I am American, although I have white skin and come from European ancestry. I have been vegetarian from the age of 16 (I am now 37) and have long believed in the principle of ahimsa. I always felt stifled in the church and looked for a faith that embraces intellectual questioning while holding onto bhakti. I have never felt comfortable with the binary divisions of heaven and hell, saved and unsaved, Christian and pagan. The Protestant church seemed to me a sort of holding cell for those who wait for salvation after death, an institutional purgatory. I heard a lot of talk about “walking the walk,” in Christian parlance, but Self-realization was not the primary motivation. I encountered lots of well-meaning people, but I always felt a vague to acute sense of dissatisfaction.

Now, like a snake shedding its skin, I divest myself of my childhood belief while hoping not to offend my parents and those who still hold to exclusivist Christianity. Since I am now a philosophy professor and a freelance writer and editor, I no longer earn any income as a minister. This gives me the freedom to speak openly and practice Hinduism. This can sometimes be a bit lonely, as the images of the devas presiding in my home and tattooed onto my arms draw quizzical looks. I sometimes feel like people take my Hindu belief as a passing phase or a novelty item rather than a way of life or a belief system, as though I am expected to default to Christianity because of the accident of my American birth. I have to steal time to practice my devotions, since the secular world in which we live no longer values the blessings of the gods.

My journey towards dharma began with reading Mahatma Gandhi’s autobiography and Herman Hesse’s Siddhartha in my teenage years, when I was about 15. The old paperbacks were left over from my dad’s college days in the 1960s. I think he also had a philosophy textbook that explained the Atman- Brahman relationship. I was always reading at that point in time, in order to escape from my terrible social life. I found a few friends and started dating not long after, and my first serious girlfriend was vegetarian. That dietary choice would exert its influence on my intellectual life over the years, and it made me amenable to visiting the Hare Krishna temple in Atlanta, while I went to school at Emory University.

I had some spiritual experiences that led me into the Christian ministry, which put my interest in Hinduism on hold for a long time, but I was developing my spiritual “muscles” all the same. 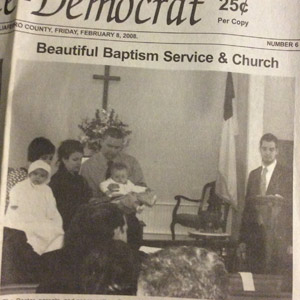 A newspaper clipping showing Dillard-Wright as a Protestant minister, presiding over a child's baptism.

I was drawn to the mystical side of Christianity. In college and seminary, I went on retreats at the Trappist monastery in Conyers and at a few other retreat centers, which taught me silent meditation. Books like The Imitation of Christ by Thomas à Kempis, and the Practice of the Presence of God by Brother Lawrence, seemed to imply that one could actually become like Jesus rather than just receiving vicarious salvation. In college and seminary, I spent more time praying than I did studying, but I still received good grades in all of my classes. The story of my break with the church would take more time than I have here, but I gradually discovered the impact of Hinduism on various philosophers, from Emerson to Nietzsche to Schopenhauer. My mentor in graduate school, Robert Corrington, the founder of a school of thought called Ecstatic Naturalism, also had roots in Hinduism via theosophy and pantheism. So while my life in the church fell apart, I found my way back to dharma through some pretty abstract speculative philosophy.

After I moved to Augusta and became a professor, I took Comparative Religion classes to visit the Augusta temple on several occasions. The priest, Satyaji, gave me a book called Dancing With Shiva, which explained Hindu beliefs in detail and led me to take the Master Course directed by the Himalayan Academy, the educational branch of the Kauai Aadheenam, a monastery descended from a Sri Lankan Shaivite lineage. I never took initiation in that tradition, but the monks introduced me to Lord Ganesha. I found my current gurus, who basically teach Shaktism but never use that label, while looking for the prayers to bless a new dancing Ganesha image for my home. My gurus teach the worship of all of the gods and embrace deities from every tradition. Over the past few years, I have come to internalize their teachings and move further into dharmic truth.

So now I make my home at the intersection where India and America converge. It is easier for people like myself to encounter Hinduism than ever before, as the diaspora community reaches to every urban center in America. The teachings of various lineages can be found on the Internet free of charge or at low cost, and murtis and other once rare items can be bought direct from India. I hope to one day be able to go on a pilgrimage to Dakshineshwar, to visit the place where Shri Ramakrishna served as a priest, but in the meantime, I am able to worship in America without too much difficulty. I have made a few contacts in the Indian community for those times when my home worship seems too isolated.

I continue to draw strength and inspiration from the gods and my gurus, and I pave the way for my children’s generation, who will have even greater access to the timeless truth of Indian religion. My faith will probably continue to be a bit uneasy socially due to my family of origin and my context in the socalled “Bible belt.” Several of my students have tried to re-convert me to Christianity due to my beliefs in Eastern philosophy and (God forbid) Darwinian evolution. I don’t think they realize the long struggle that it has taken me to reach this point in my journey and the seriousness of my commitment to living the truth. A little bit of unease is worth the price for the friendship of the devas, who constantly give me the strength and courage to live boldly in Kali Yuga. 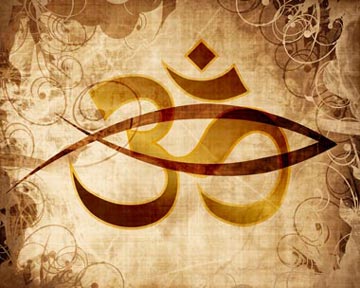