Faith: The Uphill Path of a Progressive Hindu 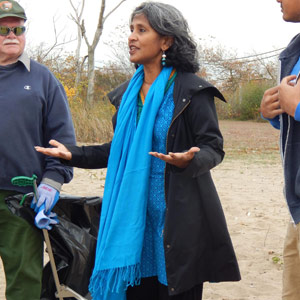 From promoting environmental hygiene among devout fellow Hindus to speaking up against Islamophobia and taking on the saffron-clad Hindu right, Sunita Viswanath treads a road rarely travelled, along the way shaking up ossified notions of what it means to be a Hindu.

In the fall of 2011, New York City found itself in the middle of the Park 51 controversy triggered by the proposed building of a mosque at 51 Park Place near Ground Zero. To counteract the furious campaign against the proposal, an interfaith rally of support was held. Sunita Viswanath was the lone Hindu in that rally. “It was another interfaith rally without Hindus,” she lamented.

Talking about an interesting turn of events at the rally, she said, “Suddenly, out of thin air, I heard a Hindu prayer on a megaphone. I thought, ‘Oh my God! I wonder who it is!’ I took a look and found that the Hindu prayer was coming from across the road, behind the police lines, where people were demonstrating against the mosque. I thought, ‘I am here. I disagree with you. And I am a Hindu.” 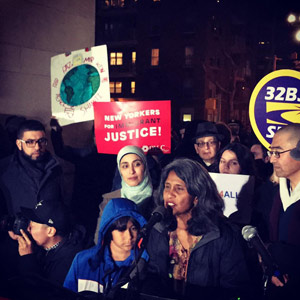 (Right) Hindus in saffron robes speaking on behalf of their faith against Park 51 convinced Viswanath that a radically different Hindu voice had to be heard in the public arena.

Park 51 was an impetus of sorts, a landmark event for Viswanath that touched simultaneously on her Muslim rights activism and her longing for Hindu support. Hindus in saffron robes speaking on behalf of their faith against Park 51 convinced Viswanath that a radically different Hindu voice had to be heard in the public arena. ‘Sadhana: Coalition of Progressive Hindus’ was thus founded in 2011.

I met Viswanath at a busy diner in Brooklyn. The 50-year-old, with silver-streaked hair, has been active as a religious Hindu feminist in faith-based women’s groups in the West. “Six months before 9/11, we were thinking about the bad situation for women in Afghanistan. All sorts of women, Christians, Muslims, Jews, came forward to speak of their work and its relationship to their religion. Apart from myself, there wasn’t a Hindu among them.” The pain of her aloneness lingers in her voice. “While I didn’t have a problem being a Hindu among non-Hindus, I couldn’t find a way to speak out as a Hindu. Hindus like myself, who are progressive, are committed to doing good in the world, but we keep our Hinduism quite private. We keep the work we do in public separate. The path of dharma is a personal one.”

Around the time of the launch of Sadhana, another voice, that of Rohan Narine, a Hindu in Queens, came to Viswanath’s attention in distant Taos, where she was vacationing with her family. “The New York Times wrote a story about this young man who wanted to screen the film Sita Sings the Blues at the temple his family runs, and then have a discussion about it. I thought it was a great idea, but other Hindus thought it was terrible and heretical. In the film, there is a critique of Ram that they didn’t like, but of course there have been many critiques of Ram’s actions in the Ramayana. I think what made the film especially controversial to the Hindu right was that it was made by a Jewish American woman, Nina Paley. Rohan began receiving death threats. The temple had backed off during the controversy, but Rohan didn’t back down. He said, ‘We will screen the film in our house.’

“I was so happy. Here was a Hindu putting his life on the line for free speech—a truly progressive Hindu working for a social justice cause. When I got back to New York, I immediately contacted him. He became the co-founder of Sadhana,” said Viswanath.

Born in Andhra Pradesh, Viswanath was raised from ages five to ten by her aunt’s family in Chennai while her parents were getting established in England. When they were settled, she joined them, leaving for America at 19 to marry. She describes her Chennai relatives as devout, temple-going, and loving, Brahmins who took “untouchability” quite seriously.

“The person who cleaned your toilet and cut your hair was not someone you could touch. Even as a child, I had moral doubts about untouchability, and expressed them to my family. They were good about it. I was given free rein to express what I thought.”

Viswanath, who as a left-wing religious Hindu, is often treated with suspicion if not rejection by the mainstream left, resembles a weary pilgrim as much as a social reformer.

She told me she just finished reading an essay by Arundhati Roy in Caravan and had been thinking of emailing her. Roy falls into the strange category of both ally and adversary. “As a progressive who cares about issues of anti-Muslim bias, caste, the injustices that are done to the poor and to the land, I agree with almost everything she writes. I only disagree with her when she argues that a progressive Hinduism is not possible because Hinduism is tied to caste. But in this essay I notice she allows for a little opening that would include accepting Hindus who don’t agree with caste. So I thought of writing her to find out more.”

Attitudes like Roy’s, when coming from ill-informed Western progressives, are harder for Viswanath to bear. Their condemnation of unread Hindu scripture as hierarchical and incompatible with political enlightenment gets under her skin. “Jewish and Christian religions have as much blood on their hands as Hinduism. And their treatment of women has historically been terrible. Yet somehow Hinduism falls into this special category.”

I ask Viswanath how she finds Hinduism progressive. “At the heart of Hinduism is the idea that the world is one family. We are all one. You can’t get any more progressive than that.”

A teacher of Hinduism at the Brooklyn Bala Vihar, she makes a Hindu perspective the underpinning of a clean-up project in Jamaica Bay, taken up by Sadhana. Jamaica Bay is where the large Hindu population of Queens goes to do puja. They often leave behind broken idols, marigolds, sticks of bamboo, bags of dal. Once a month, Sadhana enlists volunteers from the temple community to undo whatever environmental damage their devotions have wrought. “If you consider the water and the earth divine, what does it mean when your very act of worship is polluting the water and the earth?”

In 2014, President Obama bestowed on Sadhana the Champions of Change Award, about which Viswanath is strikingly self-effacing. “There aren’t many Hindu social justice groups around. What we are doing in terms of environmental justice is important but limited. We are a small group. There are larger environmental groups that make much more of an impact.”

Nibbling on her French toast, she spoke of her rough political ride inside the Hindu community. Her attacks on the ascendant Hindu right date back to the destruction of Babri Masjid in 1992.

The Muslim issue, with the short fuse of terrorism embedded in its most radical elements, is a fault line that I, as a progressive Jew, find myself sharing with her. Outspoken sympathies for Muslims and Muslim causes set many in the Jewish and Hindu communities on edge.

Viswanath has made Islamophobia one of Sadhana’s main preoccupations, speaking out against it at anti-Islamic rallies and in her writings, citing the spike in violence against Muslims in America with the Trump presidency, and the outbreak of cow slaughter killings of Muslims in India since the election of Modi. “People now feel they have permission to speak out against Muslims. It is important that religious Hindus not remain silent. One of our members, a student at the University of Chicago, organized a huge cultural event featuring music by the Muslim Students Association and the Hindu Students Association.”

Amidst the clangor of cutlery, I wonder about the size of Sadhana. She gives me the same mischievous response I get from others leaders of progressive groups. “Ever since November and Trump’s victory, our numbers have increased dramatically.”

Like the orange-haired agent of this windfall, she began as a lone gate-crasher. But unlike him, she wants to help build a new gate that is bigger, not smaller than the old.

Robert Hirschfield, a freelancer based in New York, has written for Outlook India, Sojourners, The Jerusalem Report, and The Writer, among other publications.