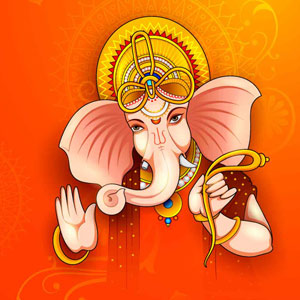 Why did she cry each year when it was time to part with this annually visiting God-guest?

When I was an adolescent, my grandmother decided it was time for the family to start celebrating Ganesh Chaturthi. My Indian father had just moved the family from the U.S. to India, but we settled in Bangalore, far from extended family that would also be celebrating Ganesh Chaturthi in Pune and Bombay. So my paternal grandmother took it upon herself to introduce Ganesha into the house. It would be her job to care for the god Ganesha while his clay murthi was a guest in our home every year.

Ganesha is a Hindu god, part of an enormous pantheon. Also called Ganapati or Vinayaka, he has the head of an elephant, the body of a man, and a predilection for sweets called modak ladoos. The god of learning and new beginnings has a festival each year, during which families keep his clay statue in their home as a guest. At the end of this sojourn, as Ganesha leaves back for his higher plane, the clay statues are disposed of in a ritual called the visarjan, where it is submerged in a water body and thus returns to Earth.

My grandmother loved Ganesh Chaturthi. She loved to have guests in general, but she particularly loved to have Ganesha as a guest for eleven days each year. When it came time for Ganesha to depart, we would not say that he was leaving, but rather that he would return: Pudachya varsha lavkar ya. Come quickly next year. And when we submerged the unpainted figure in water, my grandmother would weep.

I should make one thing clear, at the outset. I am not a religious person, though not for lack of my grandmother trying. I was raised in a combination of the U.S. and India, with some of the trappings of Hinduism and not a lot of context. At a young age I decided it made more sense to worship trees than to worship the murthis I helped my grandmother wash, the ones that she prayed to daily. At an older age, I learned about the violence religion can do, and how it excludes. These days, if I feel the need to visit a sacred space, I go to a forest.

But often I still turn the past round and round in my hands, trying to understand messages I will never be able to read. What did my grandmother see in those annual visits from Ganesha? What did it mean to her, to take care of a god for those days? Why is it that she wept?

The public spectacle of Ganesh Chaturthi, as it is celebrated in August or September across Central and South India, has very little in common with my memories of my grandmother’s quiet communion with her guest. 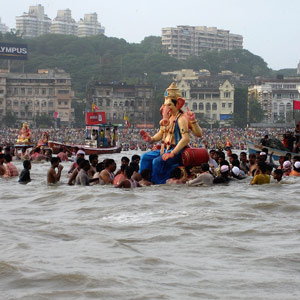 (Left) “An ornately decorated, gigantic figure of Ganesha proceeded down every street, mounted on a cart, accompanied by music-blasting loudspeakers and a jubilant crowd.” Here is one outsized one during visarjan. (Photo: Bombaygo.com)

Inside our house in Bangalore, we had our plain clay Ganesha. Outside the house, for a full week (everyone’s celebration seemed to end on a different day), groups could be heard trying to outdo everybody else’s Ganesha procession. An ornately decorated, gigantic figure of Ganesha proceeded down every street, mounted on a cart, accompanied by music-blasting loudspeakers and a jubilant crowd. Every such crowd in our particular area had a common destination: Sankey Tank, a water reservoir where the painted clay statues would descend and dissolve, releasing the god-guest back into the ether for one more year.

Right out of college, I worked for an environmentalist nonprofit in Bangalore. The organization would publish passionate requests around the time of Ganesh Chaturthi, asking people to buy simple, eco-friendly Ganeshas which would not pollute the environment. These pleas had no noticeable effect. After all, the point of Ganesh Chaturthi processions was the spectacle, the noise, the obvious money spent, and the excuse for joyful abandon. Giant splashes of color were key. The health of lake fish was secondary.

Ganesh Chaturthi is an old festival. Its spectacular parades are new. The story goes that these highly public displays of the festival were popularized by Indian freedom fighter Bal Gangadhar Tilak in the 1890s as expressions of national autonomy. The British, rightfully scared of revolt in their colonies, imposed order in a number of inventive ways. Their anti-sedition laws that curtail speech are still used in India today; a law in 1892 limited public assembly. Between famine, plague, and draconian plague-control measures there was a good deal of unrest in India around that time. Tilak proposed taking Ganesh Chaturthi onto the streets, where as a religious festival it had immunity from the law against crowds. The festival transformed from a quiet household ritual into one full of bombast. The parades were an outlet for people at boiling point. They were an opportunity to connect and make noise.

To be the child of immigrants is to be an outsider somewhat by default. If you can, you learn to compartmentalize your outsider-ness. On the surface you blend, by long habit, and hope that habit lands you on the right side of the uncanny valley, wherever you happen to be.

In my case, one parent from the U.S. and one from India, my family stood out in each country as we moved back and forth. So the game of belonging was a little more complex, from the start.

When I was very young, growing up in rural Washington, I was self-conscious about religion. I lacked the language to explain to White-American (Christian) friends why my family worshiped a god with an elephant head. It didn’t help much that personally, I had decided to worship trees. That didn’t make much sense to people either.

Despite my preference for trees I still prayed to Ganesha, who in my mind was an uncertain amalgam of Jesus, Aslan, and Santa Claus. On a regular basis, when I was young, I would ask him for good grades and world peace. Sometimes he listened to the former, but the latter somehow never crossed his radar.

Growing up I shared a bedroom with my grandmother and her very particular hoarding habits. For the most part she had few possessions, moving with my grandfather between the households of three sons. But she could not throw an image or statue of Ganesha away. Every engraving, newspaper clipping, sculpture of Ganesha must be kept safe. 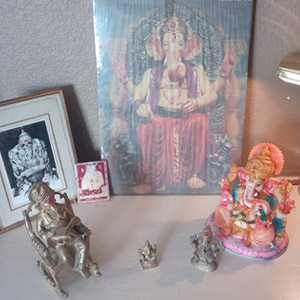 By the time my grandmother passed away, I was long past the point of praying to my Ganesha-Jesus-Aslan-Santa mélange. I’d given it up as a teenager, somewhere around the same time I stopped wishing on stars. I had no idea what to do with all the Ganeshas my grandmother had left behind. Guilty that I felt very little for that multitude of images, I didn’t know if it was ok to throw them away. So I threw none of them away, and passed off the work of sorting to someone else.

I am sorting through the past, as Ganesh Chaturthi approaches and, once again, I am doing nothing to celebrate it. Google tells me that the festival is on September 2nd this year. Without the internet, I would not have known.

Somewhere out there, millions of people have already bought their clay statues of Ganesha, large and small, painted and plain. If I still lived in South India I would be dreading the noise and complaining about the imminent water pollution. In San Diego, California, there is no sign of either. I am not sure I miss the grandiose festivities. But I am thinking of my grandmother and her quiet devotions and drawerful of Ganesha images. I do not know what Ganesha meant to her. I do not think I will ever know.

We reinvent rituals as times shift and needs change, from one generation to the next. What stays constant is the ritual’s core. And what I see as the sacred core of spending eleven days caring for a god-guest is not the god part. It’s the act of caring. To take care of a being outside the horizons of one’s body is the closest we can ever get to transcending ourselves.

Right now, my sacred task is that I am trying, with my very brown thumbs, to keep a few potted plants alive in the San Diego sun. Despite my love of green things I have a strong tendency to kill them while they’re under my care. But I am practising mindfulness with a recently acquired milkweed plant. I am feeding the plant’s soil with kitchen scraps and water, and attempting to give it the right mix of sun and shade.

I have a hope, see, that even though I don’t have a figurine of Ganesha in my home this Ganesh Chaturthi, my house will have a few god-guests this year. I have a dream that Monarch butterflies will visit and lay eggs on my milkweed plants. And those eggs will become caterpillars that will feed on the milkweed leaves outside my door until they grow large enough to metamorphize into Monarch butterflies. Those butterflies, having spent a short while as guests in my house, will fly away to distant lands.

And maybe I’ll weep a bit when they go, not knowing if their descendants will ever return. But you can’t hold onto god-guests too tightly. Pudachya varsha lavkar ya, I’ll tell them. Come quickly next year. I’ll will it to be true.

Anjali Vaidya is a writer currently based in San Diego, California. Her nonfiction has been published in venues such as Orion Magazine, the Los Angeles Review of Books, Boom California, Public Books, Dissent Magazine, and The Wire.