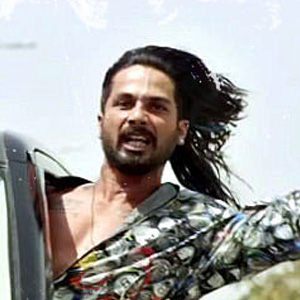 All the hype surrounding its censorship saga was not for naught. A twisted, surreptitious nexus loosely connects political and law enforcement corruption, the pharmaceutical industry infrastructure, human trafficking, modern slavery, and rampant drug abuse in certain enclaves. For a mainstream Hindi movie to tackle so many contemporary goal-posts, warts and all, is remarkable indeed. The movie is a magic ride worth taking.

Over the years, there have been many notable Hindi movies that have dwelled on substance abuse. More often than not, the biggest genre hits, say Feroz Khan’s Jaanbaaz (1986) or Rohan Shetty’s Dum Maro Dum (2011), or even Raj and DK’s zombie caper Go Goa Gone (2011) at their core touched on drug trafficking—and pretty much stopped there. Only a handful of entries have hammered deeper to explore the effects of substance abuse on individual psyches. The rarest, and arguably the best, were Abrar Alvi’s Sahib Bibi Aur Ghulam (1962) about alcoholism and Dev Anand’s Hare Rama Hare Krishna (1972) about the marijuana subculture, both of which passed box office and critical muster with biting social commentary tossed in. To the shorter latter list of great Hindi movies dealing with substance above, we can add Udta Punjab, an eye-popping, vulgar, and dark odyssey that fleshes out opiate abuse in contemporary India with devastating effectiveness.

A tight story, co-scripted by Chaubey and Sudip Sharma, strings together a large canvas. A twisted, surreptitious South Asian nexus loosely connects political and law enforcement corruption, the pharmaceutical industry infrastructure, human trafficking, and modern slavery, on the one hand, and its iron grip on individual lives and rampant drug abuse in certain enclaves, on the other hand. Caught in this vortex are four characters that occupy distinct socio-economic strata in a Punjab setting.

There is the pop singer Tommy Singh (Shahid Kapoor), a druggie brat already on a downward spiral. Secondly, on the fringes of practically everything, there is a young woman migrant worker (Bhatt) from Bihar toiling the fields in silent drudgery. The third presence is Sartaj Singh (Dosanjh), a mid-level career cop on an anti-narcotic mission. Last and not least, there is Dr. Preet Sahni (Kareena Kapoor), a gifted doctor who also runs an addiction-recovery clinic. Two simultaneous events—the migrant worker stumbling upon a packet of white powder on the Pakistan-India border and Sartaj’s brother Bali (Prabhjyot Singh) overdosing on his routine needle poke—set in motion wheels that will have far-reaching consequences for all of them.

As Chaubey’s narrative unfolds, the remarkable ease with which the four stories link up—which they do—is a marvel of not only smart editing but also better acting. Tommy, who also goes by his stage name Gabru, can only write a hit song if he gets “inspiration” from the thin white lines lining up his make-up lounge. Refusing help from his band manager (Kaushik), Tommy ends up on the run. The Bihari woman, who remains nameless, ends up in a nightmare existence thanks to the traffickers. Sartaj and Dr. Sahni, meanwhile, join forces by turning to amateur sleuthing to dig up dirt on the drug trade.

Bhatt, as an exploited migrant in the clutches of the traffickers, effortlessly channels the pain of dispossession and exploitation in a sad way, while newcomer Dosanjh appears aloof to the ill-winds that surround him until the plague strikes at home. A de-glammed Kareena Kapoor is evenly restrained in voicing the obstacles she faces in uncovering a conspiracy she knows exists and yet can’t prove. Where the acting appears somewhat stretchy is Shaheed Kapoor’s bad-boy routine that seems a bit clichéd.

Hindi movies usually conform to Indian screen taboos against cussing and kissing. Delhi Belly (2011) was the last potty-mouthed entry that raised eyebrows for its near non-stop use of expletives. And even those were cuss words uttered onscreen in English. No such luck here. Udta Punjab’s pervasive Hindi language vulgarity—colorful, taboo-shattering, and graphically descriptive—leave not even a figurative fig leaf unturned. An early trailer for the movie showed what appeared to be lead actor Shaheed Kapoor urinating on-stage. Indian censors snipped this scene—to vociferous scorn from social media. This single edit apparently was the only cut that stood between a wider general release and Udta Punjab landing the Indian equivalent of an adult-only movie-rating.

The word udta (flying) in the title pays homage to the drug culture in pretty much the same way that the Beatles classic “Lucy in the Sky with Diamonds” paid homage to LSD. It is a cynical, symbolic thumbing of the nose against the overwhelming odds that confront any efforts at official, social, or police intervention to do away with this scourge. For a mainstream Hindi movie to tackle so many contemporary goalposts, warts and all, is remarkable indeed. The movie is a magic ride worth taking.