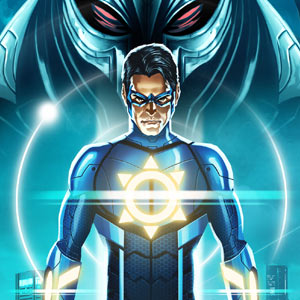 (Left) Will Chakra gain the cult status in India that Spider-Man has enjoyed in America and around the world? While that may be a formidable feat, its prospects are promising considering its pedigree—it’s a creation of none other than Stan Lee, the man who birthed not just Spider-Man but also some of the most successful superheroes franchises the world has known—The Incredible Hulk, Thor, X-Men, Fantastic Four, and Iron Man. (Photo: courtesy Graphic India)

The legendary granddaddy of a string of American superheroes is now employing his magic to cater to Indian audiences. This pathbreaking Indian superhero film will be directed by the gifted Vikramaditya Motwane of Phantom Films. 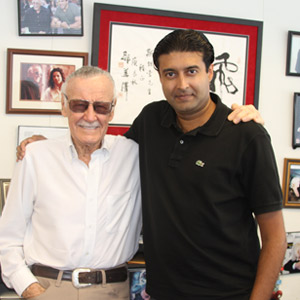 Stan Lee (standing on the left) is a legend in the world of American comic-book heroes and is deeply interested in Eastern philosophy. Sharad Devarajan (right) turned to Lee to create an Indian superhero for Graphic India. (Photo: courtesy Graphic India)

Stan Lee is nothing short of a legend in the world of American comic-book heroes. This nonagenarian is the granddaddy responsible for creating not just one or two iconic superheroes, but a whole roster full of them: Spider-Man, The Incredible Hulk, Thor, X-Men, Fantastic Four and Iron Man. Collectively, these household legends have translated into a box-office windfall of $15 billion.

Lee, who tapped popular culture to create the metrosexual samurai, gave the world a rocking Indian tech boy-genius as a superhero in 2011 in the Chakra the Invincible comic book. Like Lee’s other action heroes, this one also wore a form-fitting costume.

In creating the character of Chakra, Lee applied his super successful Spider-Man formula—teenager with special powers—and threw in a bit of Iron Man, with the inventive genius of a super suit. The result is Chakra the Invincible, the superhuman alter ego of Raju Rai, a 14-year-old tech whiz from Mumbai. The film will update Lee’s original story—which focused on Rai as a young teen, taking up the mantle of superhero after his mentor Dr. Singh invents a suit that weaponizes the body’s various chakras—to Raju as a daredevil 20-something battling evil in Mumbai. 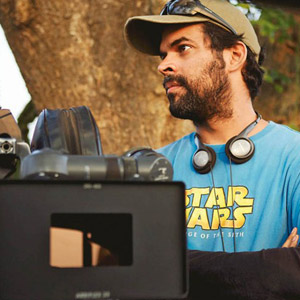 Graphic India and Stan Lee’s POW Entertainment have struck a partnership with Phantom Films to begin preproduction on Chakra the Invincible. The film will be directed by Vikramaditya Motwane, who is one of the co-founders of Phantom Films along with well-known director Anurag Kashyap.

Motwane’s agent, Datta Dave at Tulsea, brought the parties together and structured the film deal.

“I’m a fan of Bollywood films and am really excited about launching Chakra the Invincible as my first Bollywood superhero movie,” said 93-year-old Lee, who shows no signs of slowing down or retiring.

“Vikramaditya is an amazingly talented filmmaker who I have no doubt can make the Chakra film a massive hit in India and around the world. I only hope he remembers to include my cameo,” added Lee.

Motwane’s star has been steadily on the rise since his tender and complex coming-of-age drama Udaan was selected for the Festival de Cannes in 2010. However, he now needs a strong box office hit to replenish the coffers for his production house Phantom Films, which has suffered a string of box office failures in 2015 with Shaandar, Bombay Velvet, and Lootera.

Motwane is betting on Chakra creating Bollywood magic. Films about comic book superheroes are the most bankable today, as Hollywood studios produce one box office success after another. These superhero films perform well not just in the United States but around the world and especially in India, a crucial component in today’s global marketplace.

Motwane is currently working on the Chakra screenplay with Lee and Graphic India co-founder and CEO Sharad Devarajan. He is no stranger to the parallel universe of comics and is often spotted around town looking effortlessly trendy in worn-in Super-Man and Star Wars tees. A die-hard comic book fan, Motwane says it’s both an honor and “an absolute delight” to be making a film based on a Stan Lee character adding, “And no, we won’t forget Stan’s cameo.”

Graphic India, which has a large design studio in Bangalore, was started by media entrepreneurs Sharad Devarajan, Gotham Chopra and Suresh Seetharaman. It was born in 2013, with an investment of $2.8 million from private equity firm CA Media for a 33 percent stake, along with a vision of wowing the global audience with Indian characters.

Devarajan says he turned to Lee to create a quintessential Indian superhero for the Graphic India franchise as he was aware of his deep interest in Eastern philosophy, recalling how Silver Surfer, a fictional character from the Fantastic Four universe, was influenced by Oriental sensibilities.

“Stan has always been fascinated by Indian culture and its richness in tradition,” said Devarajan. “What better way to conceive of a new generation of Indian superheroes than in collaboration with the Godfather of the genre?”

Highlighting that “Stan Lee’s characters have generated $15 billion at the global box office,” Devarajan observed that “more people likely know the face of Spider-Man than they do the Mona Lisa.”

Graphic India is creating a new wave of characters that appeal to audiences from Boston to Bangalore. It is also looking to Asia for content to be shaped into comics, movies, toys, and video games. It first cracked open the $2.5-billionmarket for comics in the U.S. with Indian filmmaker Shekhar Kapur’s India-inspired comic book Devi. American readers took a shine to Goth-like Devi with her penchant for black leather and the comic book quickly went into a second print run. 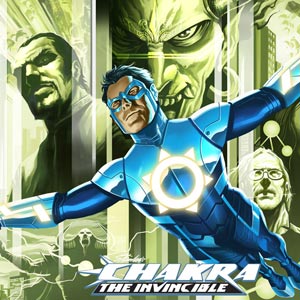 “We are mining the creative potential of India and bringing the great stories and characters of Indian mythology to the world. We have gifted artists and writers in India and our success can be attributed to the fact that these guys believe India can be a source of innovative content and not just a back-office for western companies,” said Gotham Chopra, co-founder of Graphic India, who has embraced a transcultural idea of entertainment to create a global comics and animation powerhouse. “India is ground zero for what we are building.”

Graphic India projects licensed for Hollywood theatrical deals include Ramayan 3392AD, in development with Mandalay Pictures, The Sadhu, with actor Nicholas Cage cast as the lead, and The Leaves.

A digital mobile series based on Chakra the Invincible was also launched on Rovio Entertainment’s ToonsTV platform available through the Angry Birds game. It soon became a global sensation garnering over 40 million hits.