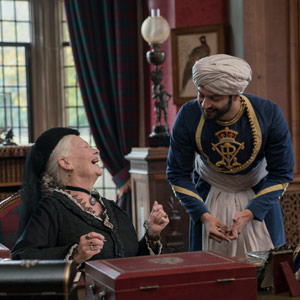 Is Victoria and Abdul yet another attempt at humanizing or rationalizing colonialism as critics have claimed, or should it be seen simply as a portrayal of a genuine and gallant friendship between the Queen of England and one of her Indian attendants?

Shouldn’t it be ‘Victoria and Albert,’ if we are talking about the Queen of England? After the demise of Queen Victoria’s loving husband Albert, there came another, different kind of relationship in the life of the Queen that was as significant, if very different and defiant in nature. No wonder the royal handlers did their level best to sweep this controversial relationship under the rug after the passing of the Queen.

Despite all attempts to eradicate any sign of this close but platonic 14-year relationship between the Queen and Abdul, her Indian servant, a century later the world knows about it thanks to some stellar sleuthing by author Shrabani Basu. Piecing together a convincing narrative from paintings, diaries, and interviews, Basu unraveled the true story of a beautiful inter-class relationship that is striking not the least because of the Queen’s bold and courageous defiance of the famed primness and propriety of British royalty. A close personal relationship between even a British commoner and a brown, Indian servant would have raised eyebrows and ire in those days. One can therefore hardly imagine the scandal it must have stirred when it was the Queen of England herself who had such a relationship. There couldn’t have been a wider gap of class, status, power, and wealth then the one between Victoria and Abdul. Not to mention the age difference—the Queen was 68 when she first met Abdul, who was younger to her by 44 years. 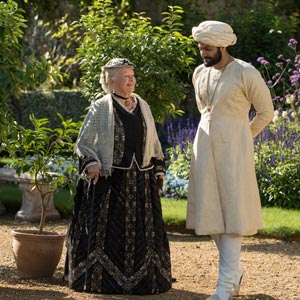 (Left) The grand dame of British cinema, Judy Dench, delivers a riveting performance as the lonesome and bored Queen Victoria, endearingly matched by Ali Fazal as Abdul, the servant who revives a spark in the Queen’s life.

Yet, in its film version, this story plays out as surprisingly warm and engaging—even witty—thanks mainly to a classic performance by the amazing Judi Dench who can take any challenging role and make a meal of it. And of course she’s played royalty so often she’s raised it to an art form, not to mention Oscar fodder.

One can’t imagine anyone better than Dench to play Queen Victoria in the sunset of her life: overweight, shrouded in black, with a gaggle of chins and a big belly, and terribly cranky, too. Dench plays the aging Victoria to perfection—the loneliness and the churlishness and the vulnerability of one to whom the world kowtows but who has no one to call her own.

This is indeed a ground-breaking performance, showing a little known side of the Dowager Empress. Dench herself says, “I don’t ever make up my mind about ‘liking’ or ‘not liking’ a character. I just try to relate as humanely and as honestly to the part as I can so that people can understand who I am portraying.”

Ali Fazal, the Indian actor from Lucknow, plays the handsome, winsome Abdul Karim who captures the heart and head of the aging monarch. Fazal is perfect for the part with his fresh face and the bright smile which brightens up life for Victoria in the loss of her beloved Albert. He becomes the reason for her to get up in the morning and remain engaged and charmed, much to the horror and chagrin of her court and son Bertie, the Prince of Wales, waiting impatiently for her to vacate the throne.

Even as her ministers fret and fume, the Queen, unperturbed, continues to get closer to the handsome and fascinating Abdul. She learns Urdu from Abdul Karim for 13 years, raises him to a munshi or teacher and takes advice on everything about life and living and religion from him, even setting up a Durbar in her palace. The queen who knew nothing about the massive Indian population gets to see things through the eyes of her Indian servant. 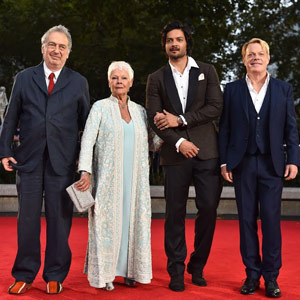 The film has a dream team: it is directed by Stephen Frears (The Queen, Philomena, Mrs. Henderson Presents) and is written by Lee Hall (Billy Elliot), based on Victoria & Abdul: The True Story of the Queen’s Closest Confidant by Shrabani Basu. There was great interest in Basu’s novel for film adaptation with several film companies vying for the rights, since it’s based on the little known Urdu diaries and journals of both Victoria and Abdul. While most anything connected to Abdul was destroyed by Prince Bertie (King Edward VII) after his mother’s death, these escaped detection since they were in Urdu.

The film has a top-notch British cast which helps trace the historic past and life in the royal court faithfully. Place and atmosphere are beautifully recreated, and some of the scenes are actually shot in Osborne House, the Isle of Wright holiday home of Queen Victoria. Here the Queen had ordered new kitchen spaces built so that spices could be prepared for her “curry” luncheons, and there is a vibrant yellow drawing room and also the Durbar Room which convey the opulence of India. The sumptuous photography and the lavish costumes are plus points in the film, and I enjoyed the sense of humor about the excesses of court life. 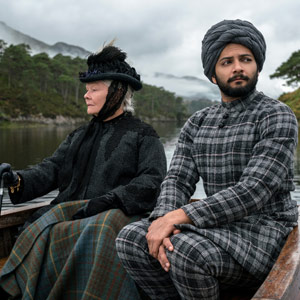 Yet, coming from India, a lot of things rubbed me the wrong way—such as the ownership of the Kohinoor diamond, and the way India was always on the margins of British self-interest and caring. Indeed, for audiences watching the film, the reactions will be mixed. A lot of viewers will bring their own perspectives, depending on their growing up years and their connections with British colonialism. I know I balked when Abdul Karim dives under the table and kisses Queen Victoria’s feet. In one of the final scenes, he once again stands near a statue of the Empress near the Taj Mahal in Agra, bends down and reverently kisses her feet. All this may not go down well with many viewers who would have liked to see the larger story rather than this story of kindness to one Indian servant while millions of Indians were kept in servitude.

While one cannot fault the film on its technical values or the acting skills, somehow the warm and fuzzy story of the Dowager Empress and her Indian servant did not resonate with me because subconsciously I recognized this as a footnote to a much larger, more distasteful history, a period whose sad legacy still lives on. You are watching the movie but not surrendering to the moment because you know how it turned out for the subjugated country.

The social media warriors have been particularly vocal. Wrote one on YouTube, “Oh, a movie about the friendship of the colonizer and the colonized—very heartwarming.” Another wrote: “Romanticizing British colonialism, how lovely.” Another was even more caustic: “So let’s occupy a sovereign region, subjugate it to our will, rob it of its natural and historic resources, when leaving leave it in shambles and divided. And then decades later make a movie about how tolerant we are that we allowed one of you to serve our queen.” Another person wrote on social media, “Look, white imperialism is cute now! Is there any part of history that won’t get whitewashed?” 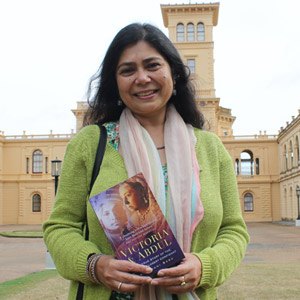 (Left) Shrabani Basu, author of Victoria and Abdul, the book on which the film is based.

Yet as the author Shrabani Basu has pointed out, the story of Victoria and Abdul is the truth, history recorded in journals and diaries. It’s interesting to note that all those years ago, Queen Victoria did learn Urdu and was curious about the huge subcontinent which she never visited or tried to uplift. The filmmakers of Victoria and Abdul do portray the bigotry and prejudice of the court and hangers-on. Says director Frears, “It’s racial prejudice and bigotry to start with, but in terms of their utter interference, it was also because they had something to protect and Abdul was a threat to them. The Indian continent itself was a threat to the Empire, so it was kept down—and kept down by members of the class that were also surrounding the Queen.”

As he adds, “Different people can have different takes on India and England, and on Victoria and her reign; this is only one tale from a multitude of stories. But we have tried to show you Queen Victoria like you’ve never seen her before.”

I asked Shrabani Basu about this racism and intolerance, and whether the film has glossed over it. Was not Queen Victoria a part of it all? She pointed out that Britain was a parliamentary democracy and that the Queen was the nominal head of the state wherein things were done in her name but she did not have the power to make decisions.

“Victoria calls them out on the racism and the bigotry,” she said. “In her own personal space in the royal court she took a stand. She’s representing racism and colony—we see her as this symbolic head of empire. What I discovered is that things were done in her name. I saw a whole new side to Queen Victoria: she herself loved India; she wanted to go to India. And she takes a fiery stand on defending the Indians—that is so clear from her journals and letters. I discovered the beating heart in this grim and almost frightening woman. This is the truth and nobody has made it up. This is not fiction. It’s a story that has to be told.”