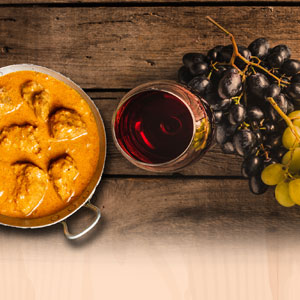 We spoke to Indian sommeliers and others to provide a primer on how desi food pairs with wines.

Few things hit the spot like a cold beer with spicy Indian food. But wine? How can something as subtle or sweet pair with the outsized flavors and spice of this cuisine? A nice cabernet sauvignon with pasta is one thing, but with curry?

Wine and Indian food may, at first, seem like a clash, but like most things about wine, once you dig deep, experiment, and experience the subtleties, wine is not only a viable option with desi khana but can also enhance your Indian dining experience to a memorable one.

With wines, there are no hard and fast rules…if there is one, it is that the best wine pairing is an entirely personal choice. Having said that, sommeliers have their expert opinions on what pairs well with the various regional styles of Indian food. But here too, recommendations are not always universal, and sometime are also contradictory.

From a sommelier to now a wine maker, Rajat Parr has navigated the world of wines. He owns three wineries— two in California, and one in Oregon. This three-time James Beard award winner also has a small Indian restaurant, Bibi Ji, in Santa Barbara, California. According to Parr, broadly speaking, spicy dishes go better with white wines which are generally sweeter and aromatic. They provide a good contrast to the heat of many spicy Indian dishes. Some examples are German Riesling and Sauvignon Blanc.

Reds, on the other hand, according to Parr, work well with cream-based gravies such as Navratan Korma, Paneer Pasanda, or Malai Kofta. 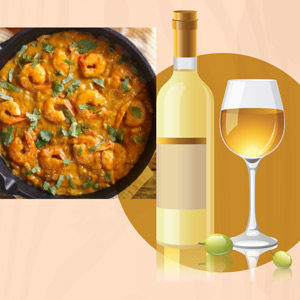 “The acidity of the sambar or rasam and richness and use of coconut milk in South Indian curries can only be paired with [white wines] like some new work Chardonnay, Austrian Grüner Veltliner, or Indian Shiraz,” offers Indo-Canadian chef and sommelier Vikram Vij of the famous Vij’s restaurant in Vancouver, Canada. 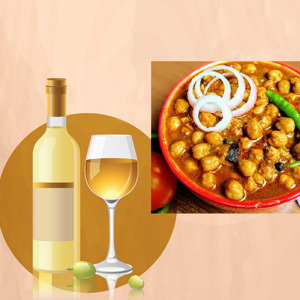 But what if you love red wines and don’t care much for the whites? Does it mean wine is out for you when enjoying a spicy Indian dish? Not quite. Co-founder of Wine Folly, Madeline Puckette, says lighter reds such as Pinot Noir and Merlot can also pair well with spicy dishes. Some of Puckette’s other recommendations:
• Aromatic whites and sparkling wines go well with rice dishes and coconut flavored curries such as vegetable kurma and idli-chutney.
• Lentils and tomato sauce dishes like chole (garbanzo beans in a tomato gravy) go well with Silvaner, a German wine similar to a Riesling.
• A bold Cabernet Sauvignon pairs well with creamy gravies like Navratan Korma and Malai Kofta. 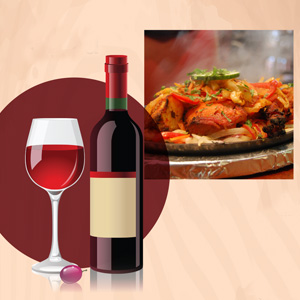 Atlanta-based chef Rajan Mistry of S3 Catering has his recommendations:
• Red meat (Lamb Rogan Josh, Madras Beef Curry, Mutton Goat Curry) – Red wines.
• White meat (Butter Chicken, Chicken Tikka Masala, or Chicken Korma) – White wines.
• Vegetarian entrees (Palak Paneer, Veg Kurma, Daal Makhani, Aloo Gobi) go well with lighter reds or whites.
• If the curry is rich, like a butter chicken, go with a lighter white instead of a bolder white.
• If the curry is lighter, then go with a bolder flavor white or red.
• When it comes to coconut flavors, go with something that is sweeter, so a Riesling or a crisp wine like a Sauvignon Blanc.
• Vegetable, chicken, or mutton biryani is best with white wines.
• Tomato-based gravies such as Chicken Masala, Baingan Bartha, or Vegetable Jalfrezi can pair nicely with rosé, fruity, light-to-medium bodied wines like Zweigelt, Pinot Noir, Garnacha (Grenache), or Gamay. 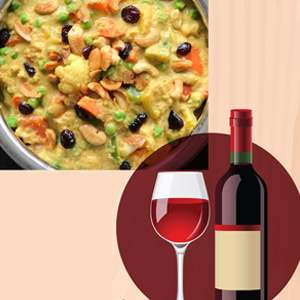 And if all this seems too much to take in, here’s some counterintuitive wisdom from the celebrated restaurateur and sommelier Vikram Vij who, as quoted in the dailyhive. com, says, “If you really want to taste Indian food and the nuances of it, you should taste water with it. But because we live in North America, we love our wine and our beer.”

Vij says, further in the same article, “There is no match made in Heaven as far as Indian food and wine are concerned. What’s correct is, you take a sip of your wine—it’s tasty; you take a bite of food and it’s tasty.”

While recommending not to overthink it, he adds, “Most importantly, don’t fuss too much over this ‘perfect pairing.’ Fuss over the food. Serve it with passion, serve it with love, and enjoy. That’s all.”