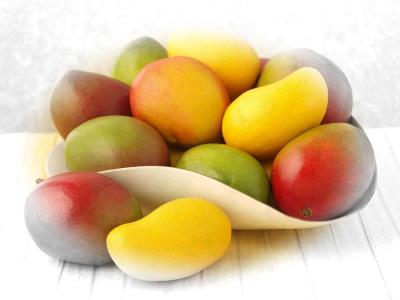 While the vendor waxed eloquent about his mangoes, we children would wait impatiently to eat them, squabbling over which of us would get the largest mango. Sometimes a ripe one would go missing from the secret stock, and my grandmother knew immediately that I must have stolen it.

In the small university town of Sagar, located in central India, we lived in a rented house in a mohalla (neighborhood) largely inhabited by officers, clerks, and suchlike. Directly in front of our house grew an impressive Maulshari tree; across the road on the other side was a gigantic Kath chandan tree behind which was a typically colonial creation—a garden known in those times as the Company Garden. The garden was full of huge mango and jamun trees around which we, the local children, used to play all the time.

Often our play would involve climbing these trees, especially when the green fruits appeared. I can’t remember if we ever allowed the tiny fruits to ripen on the trees. As soon as the raw mangoes appeared they were eagerly plucked off for on-the-spot eating or taken home in bulk for making spicy chutney and pickles.

The story was the same in our ancestral village of Rajapur Garhewa, where our family owned an orchard of mangoes. The fruits hardly survived long enough to ripen on the trees before they were picked off by dexterous, mischievous fingers. The ones that remained were buried deep under heaps of grain, ripening under the natural heat that was created.

My maternal grandfather lived in a house across the road from us in Sagar, and it was he who was the true connoisseur of the mango. I remember that a fruit vendor who walked with a slight limp was a regular fixture in my grandfather’s verandah during the mango season. On each visit, he would be laden with many varieties of the fruit: Chausa, Dussehri, Langda, Totapari, Alphonso, and others whose names were not so familiar. These different varieties would not come simultaneously, but one after the other, wave after delicious wave. The golden-colored Alphonso was the earliest to mark its arrival, and bringing up the rear was the green-hued Langda.

My otherwise large-hearted grandfather would inevitably haggle with the vendor, both about the quality and the price of the fruit, feigning outrage and ultimately coming to a reasonable settlement grudgingly. The vendor was a veritable poet when it came to selling his wares. He would go into a verbal ecstasy while describing the qualities of the fruit. The Alphonso was labeled a coy lady, the Dussehri a sweet mistress, and the Langda was hailed as the uncrowned king. 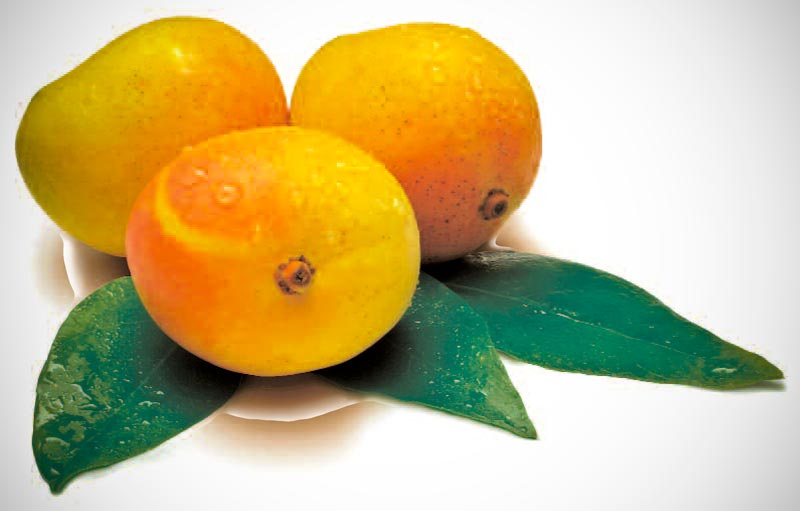 One big problem with the mango is that you never seem to have enough of the fruit. It was the great poet Mirza Ghalib who once wrote in a letter to a friend, “Aam meethey hon aur bahut se hon’’ (One can only say this about mangoes: they should be sweet and in great abundance). Indeed, sweet abundance is the hallmark of true “mango-hood.”

Perhaps that is why there are so many varieties of the fruit. Just as developing a specific school of music or dance, or patronizing one, became the pastime of the nobility, developing a new or a unique variety of the mango became an obsession, not only of the nobility and royalty, but also of ordinary farmers and villagers. There are, therefore, hundreds of varieties of mangoes in India, many of them owing their origin to some humble farmer or an illiterate gardener. I recall once eating a delicious variety of mango called Karelia aam, named so since it had wrinkles like those found on a karela (bitter gourd).

The fruit finds innumerable mentions in folklore, too. The flowers of mangoes have a long and continuing presence in Indian literature and mythology. Out of the five flowers that go to make the arrows of Kamdev, the God of Love in the Hindu pantheon, one happens to be the mango flower. And let’s not forget that the wood of the auspicious mango tree is invariably used in sacrificial and ritualistic fires. By that token even the simple act of eating a mango becomes an immortal act, uniquely relished by us mortals.

Ashok Vajpayee is a leading Hindi poet and author.

How much Indians love mangoes can be told by the uses to which they put them.

Mango is native to India, the world’s largest producer of the fruit. Very little of the Indian crop is exported since most of it is consumed locally. Aampapad (fruit leather made from pressed mango pulp), aamchur (sundried, powdered raw mangoes), murrabba (sweet mango preserve), and assorted jams, squashes, and pickles are but a few of the different end products of this delicious fruit. If Goa has caap, an unusual cross between a soup and a curry, the Punjab version of it is gudumba, and the Uttar Pradesh’s rendering is panna. Gudumba, made by boiling raw mangoes with sugar, black salt, chili powder, and black pepper, is drunk in order to prevent heatstroke. In the days before mass transportation made mangoes available to all at different times of the year, grandmothers would warn their grandchildren never to pick mangoes from the tree before Baisakhi, on April 13.

Before that date, the fruit was considered far too sour, and contained too much sap, guaranteed to give one a sore throat. The sap of the mango tree is even today considered to be strong, and so, when mangoes are bought in the beginning of summer, even the most modern family will soak them in water for a few hours, to “make them less heating to the system.” This procedure is followed until the first rain of the season, when nature herself washes off the inherent heat of the fruit. Mango panna, like gudumba, is a drink. Recent efforts to make it commercially have, however, imbued it with a chemical aftertaste. In my opinion, it is worth the trouble and effort to make this juice at least once a year at home because of the danger of forgetting the real taste and mistaking the factory version for the natural one.

In Bengal, diced raw mango is used to perk up tomato chutney, while in Mumbai raw mango is used as a souring agent in bhelpuri, a crispy puffed rice dish doused with a tangy sauce. Ayurveda considers raw mangoes cooling to the system, and so they are used in a number of dishes, including as a souring agent for dal in Bengal. On the other side of the country, Gujarat has a thick puree of ripe mangoes, called aam ras, which is eaten with breads like puris at breakfast time. Shrikhand is eaten in a similar manner in the neighboring Maharashtra, but it contains curd that is hung and thick, and so is comparatively richer and sourer. 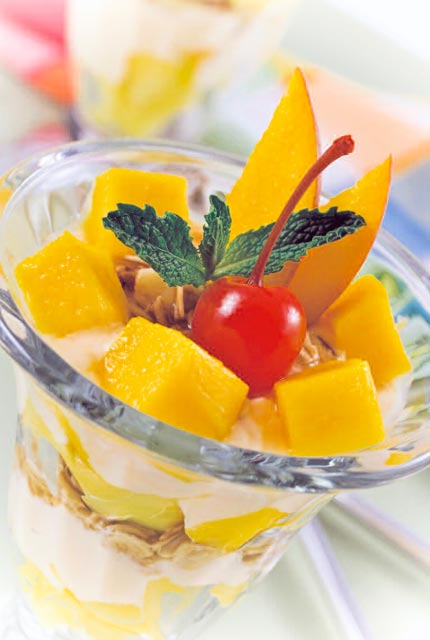 However, it is in the making of mango pickles that you get the greatest variation from one state to the other. The mango pickle from Andhra Pradesh is fiery hot, owing to the quantity of Guntur chilies that go into it, while the pickle from Punjab has a strong aftertaste of the mustard oil and aniseed that is used liberally in its preparation. Gujarati chhunda is shredded raw mango that has been cooked with sugar syrup so that it becomes like a sweet relish while the Goan water pickle is a rather Spartan preserve, which has quartered raw mangoes pickled in brine, and is something of an acquired taste.

Bona fide Indian desserts, such as the mango kulfi, use mangoes as the main ingredient in this local ice cream dish, but innovative chefs get around that problem by making a concentrated mango sauce called acoulis and drizzling it on a plate containing pannacotta, or indeed, any other dessert, so that the word “mango” can, quite legitimately, appear in the name of the final dish. The same approach is followed in a main course: grill a chicken, or any other meat, combine it with a mango salsa, or diced mangoes mixed with jalapenos, curry leaves, and mustard seeds, or any other ingredient, Indian or otherwise, and you have a mango dish.

Finally, what do you do if you want your fix of the golden fruit long after the mango season is over? Why, look forward to next year’s mango crop, of course! 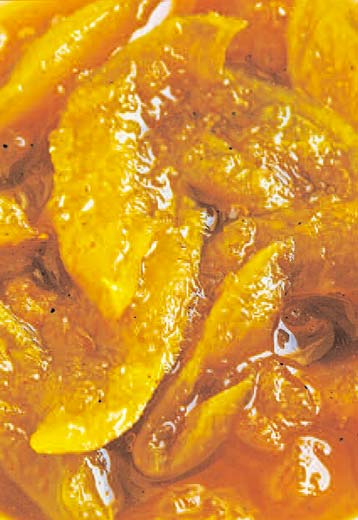