From Amita Baig’s Forts and Palaces of India. 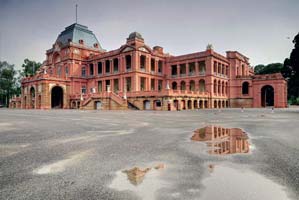 A series of 16th-century forts and palaces dot the north Indian state of Punjab, bringing to life stirring tales of valor and sacrifice. Here are some photographs from Amita Baig’s Forts and Palaces of India.

JAGATJIT SINGH PALACE:   An inscription on its external façade states that construction of the palace began in 1882 and ended in 1889. It consists of three structures joined together with rooms and doorways. The main structure, built by Maharaja Jagatjit Singh, was once the Durbar Hall. It has a rectangular plan, consisting of a central double-height hall with aisles on both sides and a double-height entrance hall. Today, it is used as a library but there remain the elements of a grand palace.
Location: Kapurthala, Punjab 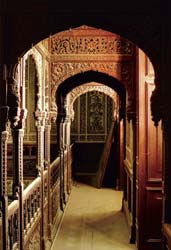 Balcony that runs on the
upper level in Durbar Hall
in Jagatjit Singh Palace, Kapurthala 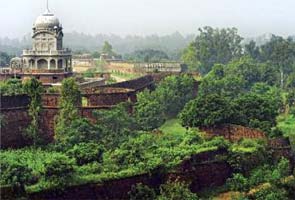 Fortifications and the historic gurudwara inside the Bahadurgarh Fort.

BAHADURGARH FORT:  On the outskirts of Patiala lies the great Sikh fort of Bahadurgarh. It is an exemplary nara durg, a circular structure with a succession of entrances and a double layer of fortifications. Most of the buildings within were for military use, but there are gurudwaras, a mosque and some royal apartments inside, as well. Considered one of the best-fortified forts in Punjab, it was originally built by Nawab Saif Khan in 1658 in what was then called Saifabad.
Location: Six km from Patiala in Punjab 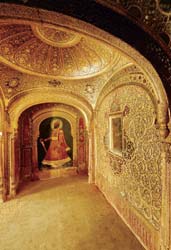 QILA MUBARAK:   Originally a mud construction, Qila Mubarak was consolidated by Baba Ala Singh after the conquest of Sirhind as a victory fort. The fort is an immense structure built with large-sized bricks used in the region, with 32 bastions, the largest with a circumference measuring 290 feet at the top. The gate is in red sandstone decorated with lattice, and covered by multiple arched openings. The most important courtyard in the Qila houses the Rang Mahal.
Location:  Patiala, 29 km west of Ambala in Punjab