COVID-19  In-depth info for Indians in Atlanta/Georgia. Click here
Home > Magazine > Features > Humor: What is in a name?

Humor: What is in a name? 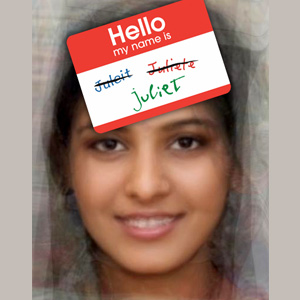 A hilarious take on how desi babus misspell names––and the fallout for the hapless citizen of India!

Re: The Indian government and its treatment of people’s names

My dear Ms. Juliet,
It has come to my notice that you have said, and I quote, “What is in a name? That which we call a rose/By any other name would smell as sweet,” when you were telling a Mr. Romeo Montague that you love him, the person, and not the name that is associated with him. Ah, silly Miss Juleit, has your Mr. Romyo ever applied for a ration card? Maybe a PAN card or even a small-time two-wheeler driver’s license? I’ll tell you just what happens then.

Simply put, a name is a proper noun that refers to a person or thing, and gives a unique identity to the item or individual. Therefore, a four-legged contraption that you sit on which has arms and a back is a chair, but not a chare or a chaire. However, when it comes to people’s names, spellings tend to differ, though the name sounds the same. Two individuals who are named after a major South Indian river could spell their names differently as ‘Cauvery’ or ‘Kaveri,’ or even ‘Kavery,’ just as long as they keep the spelling consistent, since it defines their identity. Similarly, I am ‘Lakshmi,’ not ‘Laxmi’ or ‘Luxmi,’ and if I do want to become any of the other spellings, I have to swear an affidavit in the presence of a legal authority. The Indian Government, Ms. Julette, will take a grim view about your Mr. Romero, if he goes around taking you seriously.

Having said that, Ms. Jollete, you also have to be aware that though the Government mandates consistency in nomenclature, its officials are not so particular, and tamper with people’s names and initials at will. I demonstrate through anecdotal evidence: once a Ms. Ragaja Gopal found her railway ticket given as Mr. Rajagopal, and a Mr. N. Nagaraj keeps getting water bills addressed to Mr. M. Nagaraj, and a Mr. G. Ramamurthy has all his utility bills coming to his house under the name Mr. G. Ramaswamy. Also, my husband, P. M. Aiyappa of Vihara Marg in Mysore was issued a driver’s license as P. M. Ayyappa of Vinaya Marg. As it happens, there is a Vinaya Marg in Mysore, and if there is an Ayyappa residing there, well, he had better pray that his ‘namesake’ doesn’t drive rashly. There is also an ever present danger of involuntary religious and transsexual conversions such as when a Ms. Kalyani becomes a Mr. Kayani, or a Mr. Ali Sait becomes Ms. Anita Sethi. You may say that it is a good thing if bills are addressed to someone else, because that absolves you of the responsibility of paying them, but what about when the apartment or plot of land that you bought with your life’s savings is registered under a misnomer?

We know that the good folks at the Government are aware that these kinds of silly spelling mistakes happen all the time. We know that it is as if only dyslexic people are recruited by the Public Service Commission. In Government offices, they ask you to print your names in block letters on applications, then ask you to read it to them, and nod their heads … and then proceed to screw the names up thoroughly.

Ms. Jalaja, sometimes these mistakes are so weird that they defy plausible explanations. My grandfather’s name was Venkataramanan, but it is variably written as Venkatramani or Venkatraman, but that, at least, is pardonable. Sometimes the entire name gets changed, and there is no earthly typo that can be blamed for it. How would you explain to one Mrs. Alamelu why her Electricity Board lists her as Kamala, due to a typo? Or why Mr. Rangarajan’s official mail calls him Mr. Raghunath?

My dear Ms. Jagadeeshwari, I also regret to inform you that once a mistake has been made, it is almost impossible to correct it. If ever your Mr. Rahman ends up with an incorrect name spelling, he has to take all the documents he ever had, from his preschool leaving certificate up to his son’s mundan picture, all documents duly attested by a ‘reliable’ Government official in the presence of his great-grandfather (the Government is gracious in this aspect. If, by sad mischance, his maternal great-grandfather is dead, he can take his paternal great-grandfather). He should also take out his entire savings in 500 rupee-notes, to give as tokens of love and affection for people whom he has never seen before and will never see again (at least not until his name gets messed up again).

Finally, a friendly warning to you, Ms. Jeeva. If your Mr. Rambhai Malhotra thinks he can get a passport with just a Government document as his proof of identity, he is better off sticking himself with a dagger. Thank you.

Lakshmi Aiyappa is a freelance journalist and humorist who was once an expatriate in the U.S. and now writes from Mysore, India.