Identity : The Power of Representation 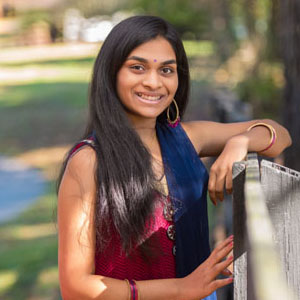 For a young Indian-American who grew up looking to belong, the rise of Kamala Harris to the position of Vice President is an exhilarating feeling—for the inclusion that it signifies.

On August 11, 2020, Kamala Harris was announced as Joe Biden’s vice-presidential pick. I don’t think I’ll ever forget that momentous occasion. I had plopped down on the couch with my hot cup of afternoon chai, and, as usual, had turned on the TV to flip to New Girl reruns. But before I could switch to Netflix, I heard it…a news reporter announced Kamala Harris as the first half Black, half Indian-American female candidate for Vice President.

I felt my breath getting caught in my throat, my heartrate skyrocketing, and my stomach suddenly filling with butterflies as I blinked at my TV screen. Did a news reporter on a major TV network just say “Indian-American” in the same sentence as “vice president”?!

I was thrilled for finally being represented in such a high office of the nation—after a lifetime of looking to belong.

What representation has meant to me through my growing years

[Right]  It took the author some growing up to finally figure out why, as a growing child, she was particularly attracted, to the dark skinned Polly Pocket doll.

It’s 2006, and seven-year-old me is obsessed with Polly Pockets. There’s always one Polly Pocket that gets the most “screen time.” She has curly hair and vibrant clothes, but there is nothing else about her that really stands out for me at the time. So, why was she so special to me? It wasn’t until a couple of years ago that I finally figured it out. In a sea of white baby dolls she was the only one who had darker skin. Even if I didn’t realize it at the time, she stood out for me from the rest because she was a beautiful little girl of color.

It’s 2008, and nine-year-old me is filling out the demographic questions at the beginning of a standardized test. I get to the “What is your race” question and am immediately stumped—which sounds ridiculous: which fifth grader doesn’t know what race she is! Well, I am stuck between two options: “Asian” and “American Indian.” And guess which one I end up selecting? “American Indian.” My teacher soon calls me to her desk and explains to me that I was, in fact, Asian.

While this memory always makes me burst out laughing now, at the time, it was so serious. Could I be blamed for marking myself “American Indian,” not knowing that it was referring to an entirely different race—Native Americans? I was just so excited seeing an option that included both of my distinct identities: American and Indian. How could I not choose it?! Finally, I thought, it was my time to be represented, if only on paper. But alas!

[Left] In Danny Boyle’s Yesterday, a tribute to the Beatles, Jack Malik (played by Himesh Patel) is just another struggling American musician.

[Right] Blinded by the Light, directed by Gurinder Chada, was inspired by journalist Sarfraz Manzoor’s love of Bruce Springsteen’s music—and features yet another South Asian as the lead character.​

It’s 2015, and 17-year-old me is creating a new family on The Sims, a life simulation video game. As I’m creating a character, I click the button that gives the girl a caramel-colored skin. I name her: Aisha. This may not seem like a big deal; but it was to me, at the time. In my 17 years, this was the first time I had ever created a character that was Indian-American. Up until then, every character in my made-up world was named Ashley, Madi, Kelsey, etc. In fact, when I used to play “pretend” with my friends growing up, I would always say that I was a girl named Kelly Brookes. While there is absolutely nothing wrong with these names, they were definitely not representative of me. It took me 17 years to include someone who looked like me in my virtual world.

It’s 2019 and 21-year-old me is sitting in the movie theater as the trailers begin. First comes the live-action Aladdin, featuring a brown skinned Princess Jasmine as the future ruler of her kingdom rather than just the love interest of Aladdin. Next comes Late Night led by the beautiful Mindy Kaling who, in the movie, utilizes the unique perspective that comes with being an Indian-American to transform a writers’ room, and ultimately saves a show that was about to be cancelled. Third was Yesterday which portrayed an Indian-American man as the lead character who finds himself in a world where he is the only one who remembers the iconic songs by The Beatles. And last but not least, was Blinded by the Light, directed by the incredible Gurinder Chadha. The film was about a South Asian British teen who turns to Bruce Springsteen’s music to bridge the gap between him and his family.

[Left] Maitreyi Ramakrishnan rose to stardom as the lead character, Devi, in Netflix’s Never Have I Ever.

[Right] Hasan Minhaj’s Patriot Act stirred up quite a buzz throughout its 40-episode run that recently came to an end.​

By the time the trailers ended, I found myself in tears—which is saying a lot because I rarely cry during movies. Four out of four trailers had South Asians not just included as part of an ensemble cast, but as lead characters in these feature films! I had never seen anything like that in my life. I will always remember the amount of pride and confidence I felt sitting in that movie theater.

I’m so glad that I was born at a time when I got to grow up watching my world transform in terms of representation. As I get older, the world of entertainment continues to get more diverse; and it’s a joy and honor to watch that happening. Today’s Indian-American children grow up watching shows like Mira the Royal Detective and Never Have I Ever; and today’s Indian-American adults get to finally see themselves on the big screen. When I turn on my TV, I see Hasan Minhaj, Mindy Kaling, Manish Dayal, Jameela Jamil, Utkarsh Ambudkar, Kal Penn, Hannah Simone, Ritesh Rajan, Karan Brar, Maitreyi Ramakrishnan, and many more.

[Right] Kamala Harris: a monumental milestone in the arc of Indian-American representation.

Seeing myself represented in the mainstream is a reminder of what is possible. Indian-Americans are slowly moving from not existing at all, to being awkward nerdy characters in pop entertainment, to being the leads in feature films. And now, Kamala Harris represents a monumental milestone in this exciting arc of Indian-American ascension. Buoyed by a growing number of examples all around me, I hope to contribute one day to this rising phenomenon. That’s the power of representation.


Raveena Kumar is a graduate in Communication Sciences & Disorders from University of Georgia, and is currently pursuing her M.S. in Speech-Language Pathology at Georgia State University. While in quarantine, she began blogging at https://ravrambles.wordpress.com where she focuses diversity and disability advocacy.