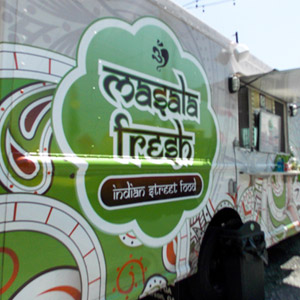 Savvy operators of two recent establishments in town are making desi street food accessible to Atlantans, one with a newfangled food truck, another a bit more flamboyantly.

Remember the khau galis (food streets) in Indian cities? Well, miss them no more. That kind of fare—quick, indulgent calories in tasty bites—albeit with an American twist, have cropped up right here in Atlanta.

Pratik Jain remembers being in a neighborhood where people wondered what he was about as he parked his fluorescent lime green and orange truck. “The curious ones came, asked, and tried what it was about,” says Jain, of his food truck Masala Fresh. “It was a slow day that day. But the next day, we sold out. The people who tried the food the day before came back for more and brought their friends.”

Taking a gamble in an industry he loves, Jain shot for the stars when he opened Atlanta’s first and only food truck catering Indian food. The can’t-miss vehicle of Masala Fresh stands out at the Atlanta Food Truck Park and moves through our Southern city hoping to become a favored spot of Indian food aficionados, and diversifying the palettes that have yet to bite into the masala madness.

His plans were to launch a brick-and-mortar restaurant, but advancing on trend, Jain launched Masala Fresh in November 2012. Six months in, and the Atlanta Food Truck Park’s staple is the answer for instant gratification when it comes to Indian food. “We offer the simple dishes that everyone knows, and slowly add our twist to them making it familiar, yet different.” 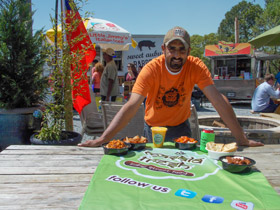 With bright colors, a striking logo, and a novel concept, Pratik Jain is reinventing Indian street food on Atlanta streets.

For 10 years, Jain worked in the hospitality industry— from the kitchen to management. “This is my passion, and I worked mostly on the front end, interacting with guests, learning likes and dislikes, and really embracing what this industry is about,” said Jain, whose family moved to Atlanta from Nairobi, Kenya in 1991.

This collective experience, along with following the newest trends of food trucks, allowed Jain to take a big risk in his career—a risk that is already turning up rewards. “There is no shortage of Indian restaurants in Atlanta,” he says. “But, sometimes, you aren’t really up for the formality of dining in, and you want something quick that also still satisfies that craving for Indian food.”

Jain talks to his clientele everyday: what they like; what they don’t like; is it too spicy or not spicy enough? This interaction, the same trait he brought over from his hotel management days, has allowed Jain to tweak the menu by adding his own flavors on Indian dishes that have quickly become classics amongst the non-Indian crowd.

“Ninety percent of the people who have come to Masala Fresh have never tried Indian food,” Jain said of his observations. “This has given me the opportunity to educate people about the cuisine and not be intimidated by it.” 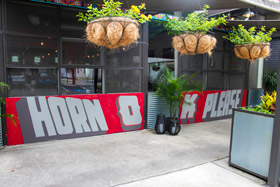 Meherwan Irani shared the same sentiment when he spoke of his passion, Chai Pani. The restaurant expanded to Decatur from Asheville in March 2013 and the word-of-mouth has spread like wildfire. Just months into its existence, Chai Pani is already a popular destination in this neighborhood of trendy restaurants.

Irani, who was born in London and raised in Maharashtra, talks about that “niche for Indian food that wasn’t so formal or intimidating” as being the target he was after.

When he moved back to Asheville, his passion for food and cooking inspired the idea for Chai Pani. “My goal was to introduce people to the food we actually eat at home,” he said. “We don’t eat tandoori chicken or chicken tikka masala everyday.”

Trying out street-side staples that most of us grew up with, like pani puri, bhel puri, pau vada, and drinks like nimboo pani (spiced Indian lemonade), but in a sanitary environment with the added panache of an ambience that is professionally crafted, is an invigorating experience at Chai Pani. 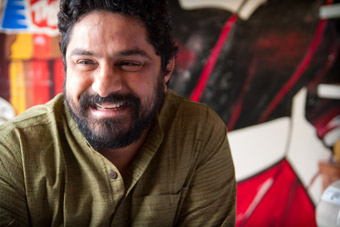 Thanks to a professional, almost corporate approach—employing a brand director, a marketing director, and a chef who is an American native who went to India to better acquaint himself with street food there—Meherwan Irani (left) has made Chai Pani a hotspot in the Decatur enclave of trendy restaurants.

Michael Files, art and brand director for the restaurant, channeled the organized chaos that is India. “I love the chaos, the colors, the street life,” he said. Files spent one year in Bombay working with Gallery Chemould, one of India’s largest and most prestigious fine art galleries. “That to me was India. Fun, colorful, warm, and my goal was to introduce people to India that way along with the food.” Chai Pani Decatur’s décor is inspired by the colorful Tata trucks that frequent Indian roads, one of Files’ favorite things during his time there.

What Masala Fresh does for the non-Indian crowd through mobility, Chai Pani does through brick-and-mortar. Both ventures have brought a taste of nostalgia for Indians and a dive into adventure for others. The establishments complete the experience through the presentations, selling Indian cuisine as more than just an elongated influence of the Mughal Empire.

With Masala Fresh’s neon trucks donning graffiti-style artwork and strolling around the city, and Chai Pani’s photography and ode to old Bollywood movie posters, the experience is wholesome.

Masala Fresh stands at the Atlanta Food Truck Park off Howell Mill Road Tuesday through Sunday.  Follow Masala Fresh on Facebook to see where it rolls to next.