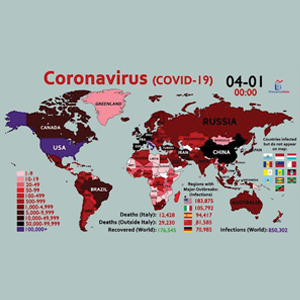 The pandemic has, in just a few months, changed our lives so much that it’s hard to know when it will end, how it will end—and what it all means.

We are edging past our lockdowns in the U.S., yet others in the world have extended theirs. We know more about the virus and its treatment, but we don’t know enough. We crave science, but this science is uncertain and contradictory. Whereas once we believed that we could find universal cures for cancer, we now know that we can’t even cure a cold virus.

As a global community, the pandemic has caught each and every member state unprepared and unguarded, rich or poor, north or south, developed or developing. Even as country after country scrambled to try new strategies—lockdowns, stockpiles of personal protective equipment, more beds in makeshift hospitals, guaranteeing a living wage, testing new medicines that were actually old—the bodies piled up, healthcare workers died and people everywhere reacted in panic and fear.

Death is the great equalizer. And yet, equal as the world community was being made by the pandemic, great inequalities were still being thrown up. In the U.S., exhortations of #staysafestayhome were increasingly applicable to the lucky ones who were still being paid to work from home. Others worked to keep us in shelter—delivery and uber drivers, grocery store workers, plumbers, electricians, and of course, healthcare workers. Those that still drew a salary could not understand why others who were protecting their own small business might risk sickness and death to save it from closed doors forever. Communities of color, and particularly African Americans, were affected in far greater percentages than others. Those most at risk wanted the healthy to stay in shelter for as long as it took for the very last infected person to recover.

And then there were the brutal disparities that the virus brought to the fore in India. As PM Modi called a near-sudden lockdown on March 24, the middle class and the rich rallied to the call and took shelter in the comfort of apartments and dwellings which, no matter how modest or lavish, were still theirs. But the millions of poor migrants and workers in India’s teeming cities—those who allowed these cities to function every day, such as drivers, gardeners, couriers, cooks, and construction workers—were cut loose and asked to “go home.” For some, home was a footpath or an alley, and there they stayed, left to the mercies of surrounding homeowners for food and a piteous uncertain existence. Others, facing hunger and hostility, began the long trek “home” to villages and small towns from citites all over India. In the absence of transportation, they started their impossible walks, some to reach and some to die. On social media I saw some Indians who felt their pain and cried with them, and others who seemed to have acquired a certain cruelty, perhaps from their fear and ignorance. They cheered when the police beat hapless fellow Indians and, as we saw in one horrific image, doused them with disinfectant as if they were vermin.

And so where does this leave us, the world community, the human community, in May? The answers are as chaotic as they were a month ago. We still have no cures, but we may have some promising treatments like remdesivir and favilavir—which, by the way, India was on the forefront of trying many weeks ago. We find that India may mercifully somehow be experiencing far fewer deaths than other countries. Why? We can speculate, but we don’t really know. We have done a 180 on masks and have now decided that they are valuable for all—but all of Asia already knew that for years. And the World Health Organization seems to now be saying the exact opposite of what it said at the beginning of the pandemic—that perhaps every country should have from the beginning followed the Swedish model after all, with its social distancing but open and lockdown-free economy.