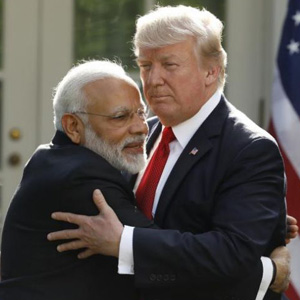 America’s closest friends have had a bumpy adjustment to the Trump presidency, and Prime Minister Narendra Modi is no different. Modi had steadily moved India closer to the U.S. during the Obama presidency. It seemed like a real strategic alliance was falling into place. Even in the eyes of India’s traditional ally Russia, India had upgraded its U.S. relationship, and Moscow moved closer to Beijing. Russia is now China’s largest oil supplier and purveyor of high-end military hardware.

Now imagine Modi’s frustration at having to convince America’s famously erratic new president all over again. Modi watched as President Trump wined and dined Chinese President Xi Jinping at his Mar-a-Lago estate in Florida in April. For China, Trump’s presidency is an unimagined geopolitical windfall. An inwardlooking Trump is not all that interested in propping up India as a counterweight to China while building America’s security architecture in the Asia Pacific region.

In fact, Trump held high hopes for greater cooperation from China to exert influence over North Korea to rein in its nuclear program. It was propitious when Trump finally tweeted on June 20, six days ahead of Modi’s visit to the White House, that he was no longer relying on Chinese efforts to deal with North Korea.

Luck also favors the prepared. Modi did his homework by watching Trump’s off-the-cuff interviews and parsing his tweets. The Indian embassy in Washington got personal insights into Trump from moneyed Indian Americans who move in Trump’s rarefied inner circle. Ultimately, Modi succeeded in build a good rapport with Trump by reading him correctly.

Much to Trump’s delight the Indian prime minister is on a massive military shopping spree. The Trump administration has approved the sale of 22 Guardian MQ-9B maritime surveillance drones, a deal that’s worth more than $2 billion, although the final details on price and other aspects are still being negotiated. The drone sale is still subject to Congressional approval. If approved, India will become the first non-NATO country permitted to purchase the high-tech drones which are usually only exported to allies involved in combined operations with U.S. forces.

“Much bureaucratic china within the U.S. government had to be broken to get to this decision,” said Ashley Tellis, an expert on South Asia at the Carnegie Endowment for International Peace. Tellis was intimately involved in negotiating the U.S. civil nuclear energy deal with India as an adviser to former U.S. Under Secretary of State Nicholas Burns.

Modi is also walking away with a new offer for a C-17 aircraft, worth an estimated $366.2 million, which adds to India’s existing fleet of transport aircraft. The U.S. will also be selling AH-64 Apache attack helicopters to the Indian Air Force.

In a Fact Sheet, the White House said that completion of the drone, Apache, and C-17 sales to India “would increase bilateral defense trade to nearly $19 billion, supporting thousands of United States jobs.”

Energy Security
What did the Indian prime minister get in return? A golden opportunity to protect India’s important energy security. Energy-hungry India, looking to increase natural gas in its energy mix, is urging the United States to green-light liquefied natural gas (LNG) exports, arguing it would be an economic benefit to both nations. Trump said the U.S. looked forward to exporting more energy, including major long-term contracts to purchase American natural gas. India must hold Trump to his promise as India imports 75 percent of its energy needs today and expects to import 90 percent over the next decade.

Washington doesn’t allow gas exports to any country with which it doesn’t have a Free Trade Agreement, but in 2013 the U.S. made an exception for India’s state-run energy giant GAIL which locked down a 20-year import deal to buy LNG from Houston-based Cheniere Energy in a deal worth $15 billion. New Delhi is now pressing Washington to relax its restrictive export policy for other Indian companies.

Trade Deficit
In a good sign, Modi’s first meeting with Trump was long on proclamations of friendship and short on confrontation over delicate policy issues. Trump did not mention U.S. differences with India on immigration, especially H-1B visas used heavily by Indian tech companies, and the Paris climate accord.

Trump, however, said he sees a need for more balance in the U.S.-India trade relationship in keeping with his campaign promise to expand American exports and create more jobs at home. Last year the U.S. trade deficit with India neared $31 billion. Trump said he would like a trading relationship that is “fair and reciprocal.”

Any enlarged scope for U.S. companies to do business in India should be linked to India getting unrestricted access to the U.S. markets for onshore and offshore software services, including visas for Indian technology professionals. India also needs to unashamedly and unequivocally link commerce with U.S. pressure on Pakistan on terrorism.

Fighting Terrorism
Modi scored an early victory by getting the U.S. administration to designate Syed Salahuddin, the Hizbul Mujahideen chief, as a ‘global terrorist’ hours before his meeting with Trump. It was followed up with a strong joint statement by the two leaders, calling on Pakistan not to allow its territory to be used to launch terrorist attacks on other countries.

“It is good that India and the U.S. continue to strengthen their counterterrorism cooperation. This will receive a boost given Trump’s own predilections. The designation of Syed Salahuddin, the Hizbul Mujahideen chief, as an international terrorist is welcome as is the ratcheting up of pressure on Pakistan on the issue of cross-border terrorism,” noted Shyam Saran, India’s former foreign secretary.

Tellis added that the outcome on “terrorism was the single most important takeaway from India’s point of view and an area of convergence, with both leaders recognizing Islamic terrorism” as a critical national security threat.

The Trump administration is considering taking a harder position against Pakistan for supporting terrorist groups in Afghanistan. The U.S. is likely planning a deployment of 5,000 additional troops to its sixteen-year-long war in Afghanistan. A troop surge and hard Pakistan line will be music to India’s ears. Among the tools considered by the Trump administration, according to Reuters, are expanding drone strikes, withholding aid, and revoking Pakistan’s status as a major non-NATO ally. President Barack Obama also tried to coerce Pakistan, by cutting economic assistance and lowering diplomatic contacts. For instance, Obama never visited Islamabad in his eight years as president.

Again, Pakistan will probably have to eat its heart out as Trump has accepted an invitation from Modi to visit India during his presidency, but no time frame was given for the trip. Meanwhile, Trump’s daughter Ivanka, who is being assiduously courted by Beijing, will lead a U.S. delegation to India’s Global Entrepreneurship Summit 2017. 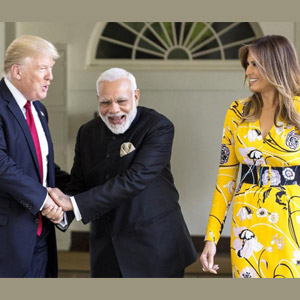 (Left) All smiles at the White House: Trump and Modi with First Lady Melania Trump.

Going by the relaxed body language and number of bear hugs—three in front of the shutterbugs—that Modi gave President Trump, the two have established an easy rapport. Much like Trump’s own seesaw style of shaking hands, analysts say the quintessential Modi bear hug has become a signature move, and is only bestowed on a chosen few.

Unlike Modi, poor Angela Merkel, the powerful German Chancellor, received a frosty welcome when she visited the White House in March this year. Trump shared an awkward moment with Merkel, apparently declining to shake her hand, a traditional gesture during a photo op at the Oval Office.

When reporters asked whether there would be a handshake, Merkel leaned in and appeared to ask, “Do you want to have a handshake?”

Trump did not even look back at her and stared glumly straight ahead. By contrast, Modi has kindled a new bromance with Trump.

“If the chemistry is good, everything else gets sorted,” quipped an Indian diplomat. “After the Prime Minister’s visit to Washington the only way is up. The visit went better than either side expected.”

Modi went back home reassured that Trump would not abandon the strategic partnership with India that had been carefully cultivated over a decade, and importantly, that Trump would keep India’s concerns in mind while dealing with Pakistan, China, and Afghanistan. Trump needed both an opportunity to bolster his presidency and a clear achievement to add to his win column. Clearly, in Modi, Trump has found a leader he can work with well. Trump can boast that he has got India to review trade practices inimical to U.S. business interests, as well as big-ticket deals in commercial aviation and defense.

Uttara Choudhury is a New York-based political, defense, foreign affairs, and business commentator for The Wire and Forbes India.