Interview: An Incident in Atlanta 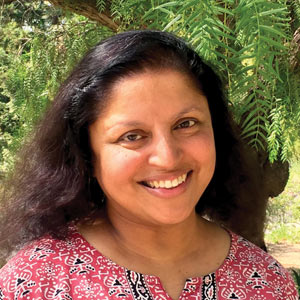 A North Carolina native, Devi Laskar started out as an intern at The Atlanta Journal-Constitution. After completing her MFA at Columbia University, she worked at the AJC full time as a reporter. She has written for numerous newspapers across the United States, published two chapbooks of poetry, and is an accomplished photographer. Now based in California, Laskar spoke to Khabar about her debut novel, The Atlas of Reds and Blues, when she visited the Georgia Center for the Book at DeKalb County Public Library.

Devi Laskar’s chilling debut novel, published by Counterpoint Press, is a story that unspools in short, luminous vignettes after the main character, called only “Mother,” is shot by the police and lies in her driveway, blood pooling around her. The book is loosely based on a 2010 raid on Laskar’s family’s home in Cobb County by the Georgia state police. Though Laskar was not harmed, what unfolds in the novel reflects what she experienced in real life when an officer pointed a gun right at her—scenes of her life flashed through her mind. These memories, and how they came to her, provide the riveting narrative structure for The Atlas of Reds and Blues. 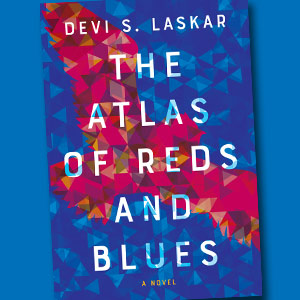 I love the title of the book. Is there a story behind how it came about?
The book was initially called When the Dolls Leave the Dollhouse, a nod to the model minority myth. But when the people at my press checked to see what other books had the word “dollhouse” in them, they discovered a Kardashian novel entitled Dollhouse. (It was published by sisters Kim, Kourtney, and Khloé Kardashian in 2011.) So, that title was out! At a writing workshop in 2008, I wrote seven poems, and one of them was my first overtly political poem—the only one that still hasn’t gotten published today. I took the lines of the poem and laid them out. One of these lines became my new title.

The style of this book is unique. You write very brief chapters, almost like poems. It reminded me of Jenny Offill’s novel, Department of Speculation and Claudia Rankine’s Citizen. What made you decide to use this particular structure for the novel?
The Atlas of Reds and Blues first began as a 5,000 word short story for a writers’ workshop in 2004. I made the chapters very short to give each of the characters space to tell their own stories, but had started to expand it. Also as a photographer, I am very interested in creating snapshots for the reader for the scenes. In 2010, my computer was confiscated by the police during the raid and all of the changes I had made were lost. Although the entire matter [involving Georgia Tech and Joy Laskar, her husband, who was a former professor and researcher at the university] surrounding the raid was dismissed in 2016, most of our belongings, including my computer, have not yet been returned. A few years ago, when I went back and decided to expand the story, I didn’t want to lose the pace and rhythm of the short chapters, so I made a choice to keep the structure.

The main character, “Mother,” is shot at the very beginning, and we see her struggling to maintain her consciousness, but the vast majority of the book is Mother reflecting on her life. How did you select these particular moments when writing the book?
When someone is pointing a weapon at you, you think about what’s important, and you think about your family and friends. I wanted to give that moment to my narrator, so it could serve as a contextual glue for the vignettes. This book was much longer, and I had to pare it down so only the very important stories remained.

This book is about community, or rather a lack thereof, and the kind of danger inherent in not having people to rally around and protect you. What was your community like when you were a child in North Carolina?
The Indian community in North Carolina was fairly small when I was growing up, and the Bengali community was tiny. I knew all five Bengali families in the greater Research Triangle Park area, and our families made a concerted effort to socialize on the weekends. As I grew up, more and more families settled in the area, and by the time I graduated from college, there were several cultural associations and construction for a Hindu temple. By the time I married, I was able to get married in the temple.

Racism is one of the big themes in the book. How did you go about trying to incorporate this into the story?
I wanted to lay out this landscape that if you’re not feeling “at home” in any one place, you’re not at home anywhere. I wanted to keep replaying the idea to the reader that people will have compassion for a person once they get to know them, but if you don’t give them a chance then you’ll never get to know them. And I wanted to instill this feeling of Mother’s isolation, due to racism, in the book.

And two characters—Mother and Middle Daughter—experience this kind of racism at the same time.
As someone who has been on this earth for 52 years, I am a little shocked that racism is still as rampant as it is. And I was very interested in showing the powerlessness of the parent—a parent can’t really do anything about the racism their child experiences except to offer advice. It’s difficult for Mother to suggest to her daughter to do something about the racism—other than “turn the other cheek” or “put up with it”—when Mother can’t do anything about the racism she experiences herself. And I wanted to show that racism is a cycle. It happens in the present and in the past.

You use dolls—especially Barbie dolls—throughout the book. Why?
Two things: Barbie dolls are the iconic American toy, the iconic image of America to the outside world. Everyone in the world knows about Barbie dolls—and they represent an impossible unattainable standard of beauty. They are proportionally wrong. Someone who looks like me will never be six foot five inches and blond. There’s so much pressure on girls to look a certain way, and they can never attain that standard of beauty, so I wanted to talk about that. And second, Asian Americans of all backgrounds at some point experience the trap of the model minority myth; we’re supposed to be dolls, seen but not heard, silent.

Do you think you’d ever go back to reporting?
I think journalism is an essential part of our society, especially these days—journalists represent the public, and they ask questions of the government on behalf of the public. But I don’t think I can be a reporter again. I think my writing has changed a lot over the years, and I like how it’s very different from my reporter days. I would like to transition into writing more creative nonfiction, perhaps essays or a memoir.

How does photography inform your writing?
After the raid, I didn’t have my computer. I needed to get back to my writing, but I couldn’t. A friend encouraged me to watch the movie Julie & Julia, where the main character cooks a recipe from Julia Child’s cookbook every day for one year. Later, I heard about an art project where someone painted a picture every day and posted it online. A friend encouraged me to do something similar—to post a photograph every day. And I’ve been posting a photo I take with my iPhone to Instagram or Facebook every day since June 23, 2011. Mostly I do nature photography—but I’m trying to capture any moments of beauty. Writing the captions for the photos helped me get back into writing poems, and writing poems helped me get back into writing prose and the book.

Do you have any kind of writing routines, and are they different when you’re writing poetry verses prose?
You can take the girl out of the newsroom, but you can’t take the newsroom out of the girl. I definitely work better on deadline, knowing someone out there is waiting to read my work. I generally like to work in the mornings for prose. For poetry, I usually get inspired as the day wears on—I like to say that I’m a night owl trapped in a day world.

Anjali Enjeti is an award-winning journalist, essayist, and Vice President of Membership for the National Book Critics Circle. She lives with her family in Johns Creek, GA, and teaches creative writing in the MFA program at Reinhardt University. Her collection of essays on identity is forthcoming from the University of Georgia Press.