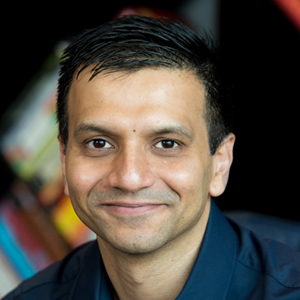 Vikram Paralkar, the newest Indian-American physician to gain wide attention as an author, shares his thoughts on the fiction he writes, his work, and even his personal life.

The 39-year-old author of Night Theater fits into the Indian-American norm of a doctor who is also a brilliant writer. In other ways, though, Vikram Paralkar does not fit into any norm. Like his beloved Dostoyevsky, he uses the novel to flesh out troubling philosophical ideas about who we are spiritually and ethically. He also employs a fantastic story line (a family of three, brutally murdered, appear one night at a doctor’s rundown clinic in rural India, beseeching him to heal their wounds before dawn) and an old-fashioned form, the fable. Engaging, astonishingly upbeat, Paralkar has seen his first novel, The Afflictions, translated into Spanish and Italian—and now Night Theater is slated to appear in Russian and French. Paralkar is an important novelist who may be on the verge of also becoming highly successful. Excerpts from an interview follow.

Vikram, growing up in Mumbai, was yours a household that encouraged literature?

Both my parents are doctors. I grew up in a very literate, well-educated family. They themselves may not have been into literature, but there were books around the house and I was encouraged to read. I would come home from book fairs with bags full of books. I was a voracious reader.

Who were your literary influences growing up?

As a late teen, I was drawn to Dostoyevsky, Jorge Luis Borges, Garcia Marquez, Franz Kafka, Rushdie, and tangentially, Tagore.

How old were you when you came to America?

I was twenty-four. I had just graduated from Seth G.S. Medical School in Mumbai. I had hoped to remain in India to work as a scientist and a doctor, but I wanted to do medical research and realized that India just didn’t have the infrastructure needed for cutting-edge research. So I came to the United States, where I trained as an oncologist and a leukemia specialist. I am currently a faculty member at the University of Pennsylvania. I treat patients with leukemia, and I have a research lab.

What drew you to write Night Theater?

The idea of Night Theater crystallized as the result of four questions: What is the role of the doctor in society? The dichotomy between the doctor as some kind of Hippocratic ideal, when he is in fact sometimes burnt-out and despairing, and the patient as the sufferer the doctor administers to. Second, what is our place in the cosmos as fragile, transient beings who live on a planet that is a speck of dust? The third question deals with God, religion, and the moral foundations of society, and where people who don’t believe in God turn to for answers. Fourth is the question of corruption in society. Having lived in India, I’ve seen what kind of society you have when corruption is the norm and the person who tries to go against it suffers because of it.

In your novel, the surgeon, your main character, winds up in this tiny village in India because a colleague accuses him of malpractice and wants a bribe, just as the government inspector overseeing his clinic wants a bribe.

Yes, as a result of pondering issues like corruption—which I observed personally as a doctor in India—together with those other existential questions, grew the idea of a doctor disillusioned by the same issues and suddenly being faced with a task that would force him to have to confront all of them.

In both your novels, first The Afflictions, where characters suffer from bizarre illnesses like reverse amnesia which makes people forget who they are, and here, where an atheistic surgeon agrees to operate on the wounds of a murdered family, because an angel in the afterlife told them that by doing so, they might be brought back to life, one thinks of Latin America’s novels of magic realism.

Magic realism is a really interesting term. In magical realism novels—like Garcia Marquez’s One Hundred Years of Solitude, for instance—the magic is part of the background of the story. It just sort of slips around the story without friction. That would be the case with Afflictions where you have a world with all these strange, surreal, magical rules in place. Night Theater was described by my U. K. publisher as “magically unreal.” Because clearly, these are events marked by the real world, and there is great friction involved. So, I would say it is a work of hyper-realism.

Ironically, you have an atheist having to play God. Was it your idea from the outset to write a skeptical novel?

I personally am a skeptic. I am an atheist. But I am an atheist who understands why religion resonates with so many people. Because religion is often willing to ask questions atheists do not consider worth asking. I am sympathetic to those questions. I am just not satisfied with the answers theism and religion provide. This book is my way of exploring those questions. 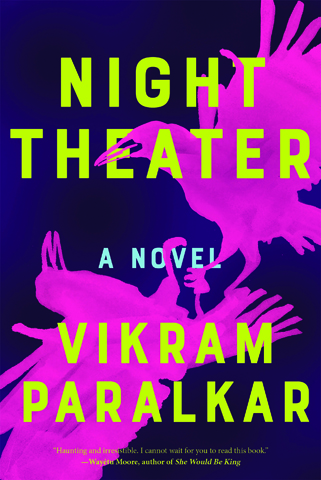 How do Indian readers react to your surgeon, so strongly skeptical and anti-religious?

No one actually seems bothered by that. There is a thriving anti-theist sentiment within Hinduism, also an ancient atheistic tradition. The idea of rebirth for example. Some people were struck by the way I used certain tropes of the afterlife. Readers in India were amused by my importing the omnipresent corruption in Indian society into my fictional afterlife and the celestial officials who govern it.

Say something about your inner relationship between the doctor/scientist on the one hand and the author on the other. Is it amicable?

I suppose that relationship is governed by a sort of treaty involving how much time should be given to each. Being a doctor, having a lab, occupies most of my time, even on weekends. I try to allocate hours here and there to work on my writing, but my career doesn’t allow me to do long book tours or attend writer’s retreats. My writing must be accomplished in abbreviated bursts of time.

Vikram, this is quite a U-turn from Night Theater, but let me ask you about the recent wedding photo with your husband Nate that received so much attention. And was your gay identity, before it went public, a private matter?

It wasn’t altogether private. I was completely out in the United States to my friends and colleagues. My parents in India knew, but they were not ready to let our extended family know. When Nate and I got married, my mother took the step of telling her sisters. At that point, Nate and I decided to post our wedding photo on social media. The response was overwhelmingly positive. Cousins, aunts, uncles, distant family members, ex-classmates, and most moving of all, strangers, people from India’s gay community, reached out to me, telling me how encouraging it was that I made the decision to come out. Coming out turned out to be the absolutely right decision. It was becoming tiresome that whenever I went back to India, I’d find myself telling my family, “I am single because I am too busy.” I’d been living with my significant other for ten years.

Robert Hirschfield is a New York-based freelance writer whose work has appeared in Outlook India, Sojourners, The Jerusalem Report, and Matador, among other publications.