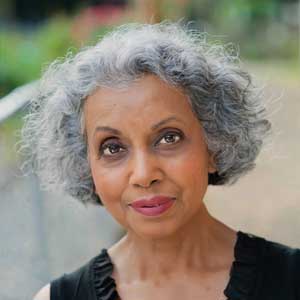 Bharti Kirchner's many journeys to and from India, Europe and the United States, jobs in computer systems management, and hobbies in cooking and gardening have provided a wealth of ingredients for her writing. She recently spoke to Khabar.

More than a decade ago, I met Bharti Kirchner at the Pacific Northwest Writer’s Conference. The petite woman—then the author of four cookbooks, four novels, and many magazine articles—spoke passionately about ways to improve setting and sensory details in fiction. She had a gift for explaining how to be more attentive to colors, sound, touch and smell in writing. Shortly after that, Bharti came to our area for a reading of her second novel, Sharmila’s Book, where she patiently answered questions and explained her writing process to our critique group.

When we met again at an Indian function in Seattle, she recognized me. She and her husband, Tom, are friendly and approachable. My husband and I have met them a few times at each other’s homes and have shared their interests in traveling and cooking.

Using her keen sense of observation and creative concepts, she turned her skills to novel writing. Like the author herself, her novels traverse continents, and describe the emotions of Indian-Americans.

Willing to take on new writing challenges, the prolific writer has undertaken a different genre with her novel Tulip Season: A Mitra Basu Mystery. Even in this genre, she has continued to depict the emotions of first and second generation immigrants. When Mitra says goodbye to her mother, she thinks India “is another mother, at times nurturing, at times indifferent.” She feels a stranger in her native as well as adoptive land, but she finally feels “at home” when she returns to Seattle. With a garden motif that runs throughout the book, she contemplates working through “cycles of growth, bloom, decline, death and challenge. Eventually balance [is] achieved, beauty awakened, a miracle birthed.”

She came to our area, Skagit Valley, famous for the largest fields of tulips in the nation, to see the colorful blooms, and I had a chance to learn about her new book, Tulip Season: A Mitra Basu Mystery. I asked her about transition from cookbook author to novelist, and her venture into the world of mystery writing, a genre that very few Indian women writers have pursued. What follow are excerpts from that conversation.

What in your childhood instilled a love of the written word in you?

I come from a family of literature-loving people. My family looked upon literature as a high form of expression of the human condition. In the evening, we’d sit around my grandfather who would read from a Bengali classic, such as one written by Tagore, Bankim Chandra or Sarat Chandra. I was too young to take part in the discussion that would follow, but found it exciting nonetheless. As I grew up, I wrote poems in Bengali and read voraciously, not only classic Bengali literature, but also translations of European, American and Russian novels. The Bengali language is rich in both original work and translations of world classics, and those helped shape my literary taste.

How did you decide you wanted to leave your job as a software engineer to become a full time writer?

The writing bug hit me. It hit me so intensely that I did what you’re not supposed to do—I quit my fulltime job and plunged right into a most difficult profession: writing. Family and friends were skeptical, but I stood my ground. I felt writing was in my bones and I had no choice but to pursue it. It’s not an easy transition, especially when you’ve been immersed in a technical field for so long. These days I am often asked by the Boeing types how did I make such a huge leap. I can offer no formula. I jumped into the big unknown with both feet and fortunately was able to land on solid ground.

Of the several genres you have written—essays, articles, cookbooks, and novels—what do you like most?

Whatever genre I am attempting at the moment seems to engage me to the fullest. Fiction is the most tantalizing and offers the biggest challenge. I fall under its influence quite easily. I believe that natural curiosity and a sense of adventure propel me to try new avenues of writing. It is by no means easy to switch from one genre to another. Each genre has its requirements and you must read extensively and learn the conventions before you can make a go at it.

Do you only write about India?

No, I write with a global focus. For example, an earlier novel, Pastries: A Novel of Desserts and Discoveries, is set in Seattle and Japan. One reviewer described the novel this way: This book explores such cross-cultural issues as Seattle WTO, riots, wasabi cheesecake, and Zen in the workplace.

After writing four novels that deal with human emotions and universal themes of love, jealousy, family traditions, social and cultural problems, what made you decide to write a mystery novel?

To make a long story short, this novel grew out of a short story published in the anthology Seattle Noir (Akashic Books). The story was well received and some readers asked me if it’d ever be a full-length mystery novel. That got me started. Now I am glad I went that route. A mystery novel forces you to look at the darker side of the human nature, which I hadn’t done previously. There’s a quote in the book: “A weed is nothing but a flower in disguise.” To the extent I can, I’ve tried to humanize my villains and not just expose their misdeeds.

The protagonist in Tulip Season is an “accidental detective” who gets clues from her mother, and from the taxi driver and dhobi (laundryman). Is Mitra going to leave her landscape business to become a fulltime detective? Since the title of your novel is Tulip Season: A Mitra Basu Mystery, is there a mystery series in the future?

I don’t know for sure what I’ll be compelled to do next. In Tulip Season, Mitra was forced into being an amateur sleuth when her best friend disappeared and no one seemed to care as much as she did. Will another devastating event happen in her life to spark her into action? We’ll have to wait and see. Writing is often a game of waiting.

What are the challenges and opportunities for South Asian writers?

I think the South Asian writing we’ve seen so far is really the tip of the iceberg. There’s much more to come, both from South Asian writers living in the U.S. and from writers who live in the subcontinent. Many of the latter write in a regional language and haven’t thus far been translated. Some people say that Indian writing is a fad and it’ll go away, but I don’t worry about that. There’s a saying in the publishing industry, a cliché, if you will: Good writing will always prevail. I believe that good writing, whether it’s about India or any other place, will always find a home.

[Hemlata Vasavada is a freelance writer based in Mount Vernon, Washington. Her articles have appeared in newspapers, magazines and anthologies.]