Issues: Rise of the Resistance 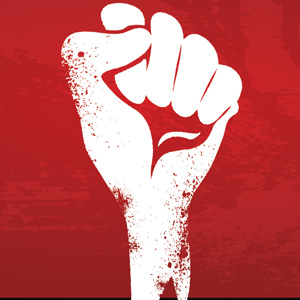 Was the 2016 U.S. election a wake-up call for local South Asian Americans? Indeed, says writer ANJALI ENJETI, who has seen a sharp uptick in community activism. An activist herself, she notes that many people are angry. But that anger—and concern—is being channeled into an energetic, potent, and tireless movement in the Atlanta metro area.

Rain pelted the windshield so vigorously the tail-lights of the cars ahead seemed to bleed into the asphalt. Squished in the second row of a minivan, I immediately regretted not bringing a larger umbrella or a poncho for the hours we’d be spending outside.

The gloomy weather, however, did nothing to dampen the mood. 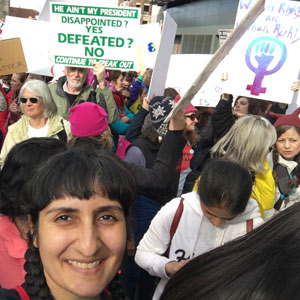 (Right) Anjali Enjeti at the 2017 Women’s March in Atlanta.

It was Saturday, January 21, one day after Donald Trump was inaugurated as the 46th president of the United States of America. There were eight of us on the road that day, six of us of South Asian origin. Our destination was the Center for Civil and Human Rights Museum, a hop, skip, and a jump from Centennial Park, where we would be joining some 60,000 Atlantans in the Women’s March, in what would come to be known as one of the largest protests in U.S. history.

I have been deeply embedded in activism for most of my life. Twenty-five years ago, I protested on the mall in D.C. for reproductive justice, rallied in support of the Violence Against Women Act (VAWA) and against the Welfare Reform Act of 1994. I have educated communities about sexual violence against women, raised money for domestic violence shelters, protested gun violence, and lobbied Congress on everything from homelessness to the Muslim Ban.

But the last presidential election brought with it a surge of activism in the local South Asian-American community like nothing I’ve seen before. It marked the turning point for Indians, Sri Lankans, Bangladeshis, Pakistanis, and Nepalese-area residents to band together and resist the harmful policies, executive orders, and laws enacted by the current administration.

Since the inauguration of President Trump, South Asian-Americans have protested against the repeal of the Affordable Care Act, which many of their children, disabled, and elderly family members can’t live without; the Muslim Ban, which prevents the entrance of their relatives from several majority Muslim countries; the appointment of avowed white nationalist Steven Bannon as the (former) White House Chief Strategist, who suggested in an interview that Silicon Valley had too many South Asian CEOs; the increase in the deportation of undocumented immigrants (some 460 Indian were deported in 2017, compared to 353 in 2016); and more.

“I left my country to get away from this kind of toxic government,” one friend confessed to me a few months ago. “Now what do I do?”

Over the past fourteen months, the local South Asian-American community has done a ton. They have joined progressive online Facebook and WhatsApp groups and organized voter registration drives. They have saved Congress members’ phone numbers in their contacts and have called them regularly to share their opinions on how they would like their representatives and senators to vote on various bills. They have donated to and canvassed (knocked on doors) for progressive political campaigns. And veteran activists and organizers have connected with other veteran activists in the local South Asian-American community to form tighter, more efficient networks. 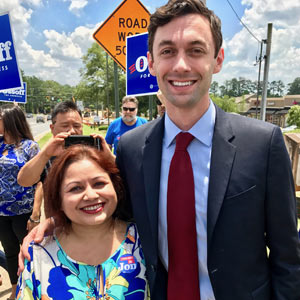 “Just like many others, I am outraged,” said Selina Molly, an engineering and technology management consultant and resident of Johns Creek. “The policies related to education, the environment, women’s rights, minorities, immigration, social security, not to mention the lack of respect for the Constitution or due process, are alarming, and we must do anything possible to get our country and democracy back.”

Molly has been an activist since her undergraduate days at Wesleyan College in Massachusetts, where she served as the director of membership for Young Democrats. Since the presidential election, she has redoubled her efforts. She has attended rallies, driven voters to the polls, and canvassed and called voters on behalf of Democratic candidate Jon Ossoff, who ran (unsuccessfully) against Karen Handel for the sixth district congressional seat in June 2017. 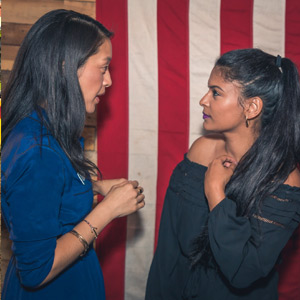 Activism is old hat for Johns Creek resident Pallavi Purkayastha. Most recently, she successfully managed the campaign of Georgia House District 89 Representative Bee Nguyen. She currently manages the campaign of Democratic candidate Angelika Kausche (who is for Georgia House District 50), serves as chief of staff for Democratic Representative David Dreyer, and is a board member for Red Clay Democrats, an organization that helps elect Democratic candidates in Georgia.

“2016 showed us the price of apathy,” she wrote in an email. “People I know who never even had a political opinion are at least paying attention if not actively participating. Given the rise of anti-immigrant and anti-minority rhetoric,” she said, referring to the February 2017 murder of Srinivas Kuchibhotla in Olathe, Kansas, “we have no choice but to make politics personal.” 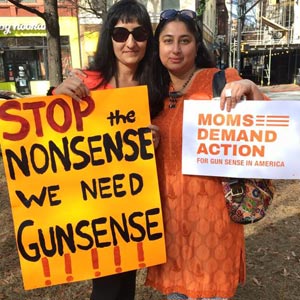 
Over the years, novelist Soniah Kamal has attended rallies, protests, and marches, as well as canvassed for political candidates. She also served as a precinct captain in Johns Creek for the Ossoff campaign. Kamal has noticed a rise in activism in the Pakistani community since the presidential election, and believes that all communities, whether South Asian or not, must find a way to come together to resist the current administration. “This grassroots involvement is vital, and being involved is important for all communities because what’s the alternative?” she wrote in an email. “Being voice-less and choice-less?”

Prior to the presidential election, Atlanta resident Prerana Sharma, who works in technology management, considered politics boring, and didn’t concern herself with law or policy. The night of November 8, 2016 changed everything for her. “It was as if every single thing I believed about humanity, and the goodness and rationality of people around me, was shattered,” she wrote in an email. For her birthday last year, she, her husband and their 6-year-old made phone calls for the Ossoff campaign. She has also canvassed, called members of congress about issues like healthcare, and boycotted Atlanta-area businesses, especially restaurants, owned by Trump supporters.

Writer Rachana Nadella-Somayjula of Johns Creek is another novice-activist, who began engaging politically last year during the Ossoff campaign. She distributed fliers to members of the Asian American community for an outreach event, and canvassed voters. What finally motivated her to get involved? She became concerned about the way the current administration targets marginalized communities. “Great leadership, like love, should always be inclusive,” she wrote in an email. “Now, more than ever, there’s a greater need for propelling ourselves toward a unified future.”

Swati Gupta of Johns Creek feels similarly. Her first foray into activism began with the 2017 Women’s March. Later, she canvassed for the Ossoff campaign and attended local meetings for progressive groups. She plans on continuing this work for the upcoming November 2018 elections. Now that she’s gotten her feet wet, she is in it for the long run. “I feel like I have to stand up not only for myself but for my kids and for other people hurt by this president,” she said over the phone. “This is not acceptable.”

“I had not participated in any political activism before the November 2016 elections,” wrote Johns Creek resident Suresh Kolichala, a software engineer, in an email. Trump’s victory was a “rude awakening” for him and his wife Pramada that he said shook them out of their stupor. Almost overnight, they went from being mere bystanders to fully engaged political activists. The couple volunteered for the Ossoff campaign and Suresh developed software tools to provide precinct captains with maps and in-depth data analysis from previous elections. Currently, he is serving as the treasurer for the Angelika Kausche campaign. “We, too, can make a difference,” he said in an email, “by banding together with millions of others to stand up against harmful anti-liberty, anti-American, and anti-humanist principles.”

Every voice counts
The beauty of activism is that no act is too small. Driving an elderly neighbor to a voting site is activism. Teaching your children to speak up when they witness racism or xenophobia is activism. Informing friends about harmful legislation making its way through state and federal legislatures is activism. Donating $5 to a political campaign or signing a petition is activism. Each of these efforts is meaningful and contributes to change. The most important thing, according to Purkayastha, is to vote. “Vote in every single municipal, local, state, and national election,” she said. “Learn who the candidates are, what positions they are running for, and what decisions they will make for you.”

Activism, too, is a means to cope with a country run amok. It offers camaraderie and support in difficult times. Said Sharma, “The only way for me to get out of that depression, that feeling of physical sickness, is to get out and do something.”

Anjali Enjeti is an award-winning essayist who serves on the board of the National Book Critics Circle. Her work has appeared in The Atlanta Journal-Constitution, The Atlantic, The Week, NPR, The Guardian, The New York Times, and elsewhere. She lives in Johns Creek, GA.