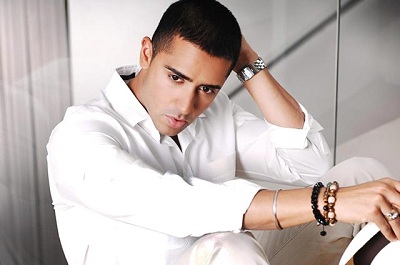 He’s the hottest export from U.K. to the American music scene—pop and R & B singer and songwriter Jay Sean has captured the imagination of the international music world, crossing cultural borders.

Sean, who has signed with Universal Records/Cashmoney, had a huge success with his album All or Nothing. His single “Down” went to number one on Billboard. His latest single “2012 (It Ain’t The End)” featuring the hot female rapper Nicki Minaj hit number 15 on iTunes within the first two days of release. His upcoming album Freeze Time, set to be released in November, is anxiously awaited by his legion of fans.

He was nominated for the 30 under 30 award in the U.K., and last year bagged the Best Collaboration Award for “Down” with rapper Lil Wayne. He’s been ranked number 35 in Billboard’s Hot 100 Artists of the year, and has been a multi-platinum artist in the U.K. since 2004, with two smash albums, and two top ten singles. He’s been nominated for Britain's MOBO (Music of Black Origin) Award twice. At last count, he had over a million fans on Facebook alone.


The Punjabi lad, whose real name is Kamaljit Singh Jhooti, has certainly come a long way. Sean, which sounds such a western name, was thanks to his Punjabi grandma, who called him Shaan—pride—and many in the family called him that, too. His is a dramatic story of creating a new genre of music in the Asian Underground with Rishi Rich, then moving on to Virgin Records, and later creating his own label. Now he’s become the first Asian artist ever to be signed by Universal Records/Cashmoney in the United States.

Recently Sean was in America to participate in the first-ever India Day parade in Atlantic City. At the reception to announce the event you could see how popular and loved he is amongst Indians of every age. While the teenyboppers were swooning over him, grandma types were also edging closer—and everyone wanted a photo with him. His music truly transcends age and cultural barriers. Sean, in spite of success in the worldwide music sphere, remains totally grounded and down to earth. As he admits, he loves his cup of chai and paronthes with dahi!

At the same time, he is hardworking and very ambitious. “America is like the Holy Grail for many artists, including myself, and I realize I have a lot more work to do, but I'm a big dreamer and I love new challenges,” he has said about his entry into the United States. “It's what drives me. If the next step after America was the moon, I can guarantee you I'd be on the first rocket there.”

An exclusive interview with Jay Sean about his beginnings and what drives him to success.

You grew up in Hounslow in North London. What was the atmosphere there, growing up as an urban Asian Indian in Britain?

It was an area which was heavily populated with South Asians. That was great for me because I went to a school which was very mixed, with Indians, whites, Blacks and it allowed me not to just have one type of upbringing or one type of influence growing up. I had a multitude of different friends and different experiences and different cultures around me and I enjoyed that. I think that it is important in that it’s setting you up for the rest of your life to be able to relate to people from all walks of life.

Tell me about the Asian Underground. What was the scene like when you made your debut?
I think in the Indian music industry in the U.K. at that time there were two real major types of music—Hindi filmi and bhangra. If you were a desi radio station, that is what you played, and I don’t think they ever played any English vocal, until I guess I came along and decided to work with a renowned bhangra producer. Actually he doesn’t only do bhangra, he can do anything, but he was well known for his bhangra, and that was Rishi Rich.

Me, Rishi Rich, and his artist at that time, Juggy D—we all decided to collaborate on this one song and I think nobody at that time had ever heard anything like that. It was something brand-new and it was a moment in time and a moment in history that I think has never really been replicated; so we started something new.


What do you think is the special appeal of your music to South Asians—Me Against Myself sold two million copies across Asia—and you have a huge fan following among young desis.

Well, I think it is a number of things. It is definitely a lot of pride and a lot of wanting to see me win, you know. I know how I feel when I see Indians on television, I feel super proud. You are so proud that with doing things outside of the norm that everybody expects us to do—all of these wonderful jobs that we have as nurses and doctors and engineers and lawyers and everything else, it’s great, and we make wonderful businessmen—we know that. But can we do something in the arts and in entertainment fields, yes we can, of course we can, we just need people to give us a chance. But when I had my shot, I think everybody wanted to see me win. And that plus of course you know I would like to think they enjoy my music. I write good songs that they can all relate to and they enjoy.

At the same time, your music is universal—you’ve reached the top spot on Billboard, the Japan Hot 100, and the U.K. R & B charts—so what is the special quality that kind of cuts across borders?

Well, I look at it like this: if you write about concepts and topics that are relatable to any human being, then your songs can affect anybody in this world, they can touch anybody in this world. Whether you are an 80-year-old man who lives in Russia who is thinking about his wife that has been with him for his whole life or whether you are a 14-year-old girl who lives in India who is just getting a crush for the first time, she is experiencing love, you know, that is why I write a lot about love, because there is nothing more universal than that.


You have had so many big successes but there must have been down periods too. How do you overcome difficult times?

Oh yeah, there was a period of about maybe two years of just pure downs. It was a very difficult transition going from my first record label to setting up my own record label: here you are an artist who has now got pretty much worldwide fame for just one album, but then there’s a record label that didn’t want to support the kind of music that I wanted to make and I was not willing to sell my soul for that and I wanted to write music that I was proud of. So I had to go on my own and I am telling you—that was difficult.

I was on my own, I had to spend all my money that I made, like every penny I put into my future. And you know, it’s a scary time; you don’t know if it’s going to work. At the same time, the music industry was unfortunately going into a huge level of piracy and illegal downloading, and you know it gets scary. And that was a difficult year, but I had faith. Faith in everything—faith in myself, faith in my music, faith in my fans, faith in God. You know, I just believed.

But did you also have to kind of reinvent yourself?

I think that is important. I decided that I was going to come back and have something for people to talk about, other than just my music. I started to discover a slight image change—you know, a reinvention is always exciting, it’s always fun. You have to move with the times, you have to.


You are a totally mainstream artist now and yet you were the chief guest at the India Day parade and performed at a concert at the Trump Casino. Your thoughts?

It was a huge honor for me. As much as my music and my career is on the mainstream side of things, it doesn’t mean I don’t want to get involved with the desi side of things. This is where I got started off. This is familiar for me, this is nice for me, this is like when you go home and have mom’s home cooked roti—that’s still a nice experience and you kind of just feel home there!

You had started out going to medical school, and would have been a physician today. Do you feel you made the right decision?

You know what it is with me—I’m all heart. I can’t do anything else. Everything I do, for every decision I make—of course I use my brain, but my heart kind of takes over, and I can’t fight it. So music was just something I couldn’t give up. Now I’ve understood that—it was my destiny to do music. It’s a good thing I didn’t ignore it because now I get a chance to touch so many people’s hearts through my music. For me, to be able to do that is an amazing thing.