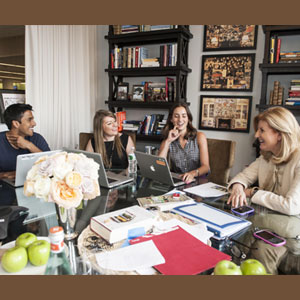 Jimmy Soni with Arianna Huffington (r) and other team members.

He’s a youthful 28-year-old who’s vaulted into a journalistic space that most senior editors and writers can only dream of. Meet Jimmy Soni, former Managing Editor of The Huffington Post who’s now piloting the launch of the iconic online platform in India, his cultural homeland.

He has been described as a hardworking taskmaster. His speedy ascent to the uppermost echelons of a brand that revolutionized media, and earned itself both popularity and a Pulitzer, is the quintessential story of a driven and passionate leader making waves and making it big. While his style of leadership at the HuffPost is not without its critics, it is equally noteworthy that he was able to spike up audience growth rate to impressive levels during his run as managing editor.

Quite the restless maverick, Jimmy designed his own major at Duke University—he named it ‘Ethics’—which encompassed a vast variety of subjects from economics, philosophy and literature to theatre. Later, upon discovering there was no book about the ancient Roman senator and statesman Cato the Younger, Jimmy took it on himself to co-author a biography published by St. Martin’s-MacMillan.

Now, there’s another exciting adventure on the horizon: taking Huff-Post to India, a nation that’s assuming an increasingly larger role on the world stage. Jimmy recently chatted with Khabar about his journey, life at HuffPost, his take on politics and much more.

I thought it over, and although nervous, the chance to help lead a 21st century newsroom was just too thrilling to pass up.

What are your tasks and goals in this role?
I try my level best to support the other editors at the Huffington Post, making sure they have the room and resources they need to do great creative work. Among the many privileges of this job has been the chance to work alongside people who are the finest in the business. In my limited way, I’ve tried to shape the place by advancing new methods of storytelling, emphasizing the importance of social media, broadening out our content mix, and hiring talented people who are changing HuffPost for the better.

Can you describe a typical day at work?
Honestly, it’s a movable feast. On a given day, I’m probably interviewing new talent for the team, thinking through a piece of content with a fellow editor, devising a strategy for audience growth and engagement for a particular section, or addressing any of the numerous challenges that can arise in a busy newsroom.

There is no typical day, but in some measure, that’s what I’ve enjoyed most about it. This role is rare in that it touches every nook and cranny of the organization—from product development to technology to even some business functions—and that variety forces you to hustle to keep up. It’s bracing, in the best way possible.

Tell us about some of the highlights you’ve experienced in this role.
Some of the real highlights come in seeing the organization stretch itself, produce new forms of content, and experiment with breakthrough storytelling. You can see when you make an impact like, for instance, when an infographic, article, or video hits that sweet spot and the audience responds to it. I especially love it when we take an otherwise sleepy topic and make it light up using the best tools of modern storytelling. It is a good tonic against the idea that cat memes are the only things that perform well online—and it is such moments that give me hope for this whole Internet content business. 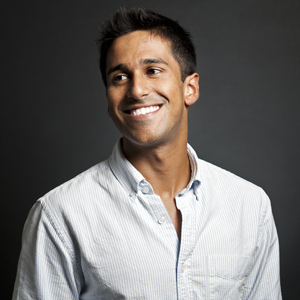 Soni’s intensity and dedication may be precisely what is needed to break into the highly vibrant media environment in India.

How much does your Indian background influence your worldview? And how?
I was born in France to Indian parents, and I came to the United States when I was just about five years old. It’s tough to separate any part of my life from that experience. There are the obvious cultural fixtures I grew up with—eating rice and daal, receiving aerogrammes from India, my parents speaking to us in Hindi, etc. But it also runs deeper than that. There were values that my parents reinforced, principles cherished in every culture but which were dialed up a notch or two in our household. I’m thinking of things like the value of education, the profound respect due to elders, the hustle and pluck that my parents exhibited every day. That said, I confess I led a pretty ecumenical childhood. My parents never required our friends to share our skin color or heritage, and my mom’s own readings and thinking were broadminded. I’m grateful for that; it freed me from a lot of the pressure and anxiety that can afflict a bicultural upbringing.

You are moving to India to spearhead Huffington Post’s launch there. How important is it for Huffington Post to set foot into India? What do you hope it can accomplish in India?
It’s a market we’re thrilled to enter. Any modern media company worth its salt has to pay attention to India. For HuffPost in particular, it’s exciting because of the Indian market’s robust mobile audience growth and the steady increase in social media use.

At HuffPost, we’ve built cutting-edge tools for mobile content creation and social media distribution, and we’re anticipating strong growth in India as a result. More broadly, India is home to so many practices like yoga and meditation that we’ve been covering assiduously since HuffPost’s inception. If you combine that with the Indian appetite for other hallmark areas of our coverage, like entertainment and politics, it’s a country tailor made for what makes HuffPost special and successful.

At Duke University, you majored in ethics. Does it play a role in your everyday environment?
Like most people, I came away from college with a cast of mind, more than a particular set of skills. A lot of the philosophy and literature I read back then still creeps into my thoughts on occasion, but it’s probably a stretch to say that my major plays a prominent role in my everyday life—which doesn’t detract in the slightest from having done it.

You co-wrote Rome’s Last Citizen: The Life and Legacy of Cato, Mortal Enemy of Caesar. What was your interest in this topic and why?
Writing that book was really more of a classic entrepreneur’s effort than a strictly authorial one. I tried to buy a biography of Cato on Amazon, and not finding one available for purchase, I decided to write it. I set out to solve my own problem.

It bothered me that there wasn’t a full-length version of Cato’s life available. Caesar had several; Cicero did, too. Why not Cato? Some things trouble you to the point that you have to take matters into your own hands, and that’s what happened here. I didn’t have academic training in ancient Rome, but between my co-author and I, we were able to make it work. A number of graduate students and professors were hugely helpful along the way. The final product strikes the right notes, I think: it’s accessible history that hopefully does justice to the life of one of the Roman Republic’s most significant figures.

In school and out of school, you have a lot of political experience. Did you/do you want be involved in politics at some point in your career?
I’ve always loved the formal side of politics—it’s why I’ve joined campaigns and worked for elected officials. I like the high drama and high stakes, the sense of being hitched to something bigger than yourself. More seriously, I think we have obligations as citizens, and participating in politics is one way of paying those debts. You don’t have to run for Congress per se, but you are obliged to think about how your life affects the community.

Managing Editor is a very challenging position. Where do you hope to go from here?
For the moment, I’m focused on making our launch in India a smashing success. One of the wonderful things about being at HuffPost and in journalism is that I’ve stopped looking around as often as I used to for what comes next. I want to see HuffPost India flourish, and after that, there will be ample time for deciding what to do when I grow up.