Journeys: An Uncharted Path to the American Dream 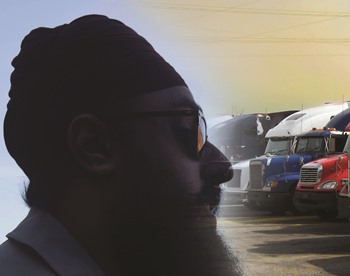 First generation immigrants in the U. S. have typically realized the American Dream through sheer ambition and hard work. Those who lacked professional credentials used raw grit and the ability to take risks to succeed beyond their modest qualifications. These parents, professionals or not, feel that their children must follow a certain path in life—a college degree, followed by a well-paying job, for instance. But second-gen immigrants often prefer to explore unconventional career paths. Paradoxically, there are common factors between the generations—the courage to take chances and the drive to achieve their ambitions. Here’s a look at how the great immigrant generation gap plays out in this father-son relationship.

Laid out on the fully-reclined driver seat in his 2003 Honda Accord, R.J. Singh took off his sunglasses and rubbed his eyes awake.

He was somewhere in Indianapolis at a truck stop, a setting he had grown comfortable with over the past three months. If it wasn’t Indianapolis, it was another city—maybe Louisville or Chattanooga or Birmingham.

Every night, after he was done traveling, Singh would find a truck stop to park his car, turn on the radio, and let music ease him to sleep.

In the mornings, Singh, 19, would shower, jump his car battery if necessary and drive to his next stop, recruiting customers for a startup he and two other business partners were trying to get off the ground. Some days, he’d talk to 100 truckers, his company’s targeted clientele. On quieter days, he’d talk to 10.

“This was what I was doing from 8 a.m. to 5 p.m., nonstop, for three months,” Singh said. Then he was back, finding a quiet parking space at a truck stop to stay for the night.

R.J. lived from his car for 3 months, hopping from one truck stop to another across many states.
(Photo: Callie Williams, courtesy, UNC Media Hub)

Miles away, in his home in Cary, N.C., his father, Gurmit Singh, wondered about R.J.

Gurmit, once an illegal immigrant born in India, understood taking chances. After all, the opportunity his son now sees compelled him to cross the southern border decades ago.

Yet, with R.J. on the road after dropping out of college just months ago, his father couldn’t help but wonder what made him and R.J. seek such different lives from the same American dream.

Because this life was not what Gurmit envisioned for his son.

“He is blind.”
Today, second-generation Americans are an undeniable part of American culture.

And this demographic is growing.

As of 2016, the same year R.J. went all in on his entrepreneurial dreams, immigrants and their U.S.-born children made up 27 percent of the overall U.S. population, according to a 2017 Current Population Survey. By 2050, the combined two generations are projected to reach 37 percent. 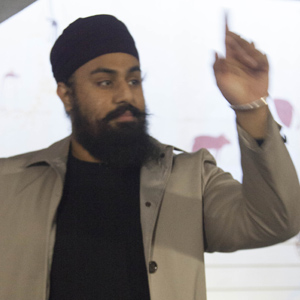 R.J. sees his biculturalism as a virtue. He is proud of the ancestry and culture that connects him with his parents. He speaks Punjabi in his house. He goes to a Sikh temple on the weekends.

But as much as R.J. carries himself as a risk-taker and walks to the beat of his own drum, much of R.J.’s life has been a balancing act: He’s a second-generation American, trying to carve out his own place in the United States, but he’s also the son of an immigrant, trying to make proud the man who gave him the luxury to choose this life.

“[First generation Americans] want their children to make a lot of money in this country, and on the right path,” said Dr. Afroz Taj, a professor in the South Asian studies department at UNC-Chapel Hill. “The attitude used to be that the second generation had to be doctors or engineers or lawyers. By the second to the third generation, the attitude changes because they have gone through the pressure of their parents.”

Months before R.J.’s trip through the U.S. began, he and the two other cofounders of his startup had moved into the Singh’s home. The three of them worked tirelessly.

Some nights, they would work well past 4 a.m.: lights on, laptops out. R.J. scanned customer lists while Dashmeet Voss and his brother wrote the code for their app’s software and website.

R.J. had taken the fall semester of his second year of college at New York Institute of Technology off in pursuit of creating TRUCKR, a platform that connects truck drivers with companies and streamlines the load-scheduling process.

But this wasn’t what Gurmit wanted for his son.

One night in October 2016, R.J. heard someone’s steps on the family stairs. It was his father. 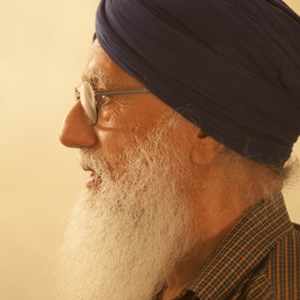 “If one guy is illiterate, he is blind. But if someone has a good education, he sees everything,” believes Gurmit Singh, R.J.’s father (on right).
(Photo: Callie Williams, courtesy, UNC Media Hub)

R.J. geared up for a familiar conversation—one packed with questions about his future. He’d heard it before: “I can only give you suggestions as a father,” Gurmit would say. “If one guy is illiterate, he is blind. But if someone has a good education, he sees everything.”

But this conversation was different, R.J. would come to find out.

This conversation had consequences.

“I told them everything.”
R.J. always understood why his father guided him the way he did. Given the life Gurmit lived, R.J. says, he had a right to.

At 10 years old, Gurmit stopped living at his family’s house. Fatherless and poor, he stayed with school teachers and administrators through grade school and paid his way through college.

By the time he earned his bachelor’s degree, though, there was little economic opportunity in India. This, along with political turmoil and violence in Punjab, caused Gurmit to look toward America.

Emboldened by his faith, Gurmit took the ultimate chance in December 1984. His application for American citizenship denied once already, Gurmit flew to Mexico City and made his way to Tijuana, Mexico, with everything he owned on his person: he wore two turbans, two shirts, two sweaters; he stuffed any relevant forms of identification and whatever money he had in his pockets.

He crossed the border, he would later tell his son, not knowing the dangers that stood ahead of him— whether that be helicopters, dogs, police officers.

Gurmit walked into a Sikh temple in San Diego with five dollars in his pocket, after using most of his remaining money for transportation. The temple found work for him as a berry-picker on a farm. A few years later, the Immigration Reform and Control Act of 1986—a law that legalized seasonal and agricultural workers on the condition that they’d pay back taxes and hadn’t committed any crimes—was his key to obtaining citizenship.

Gurmit would persevere through tough times, like sleeping in a car for a brief period in California. He later made money as a truck driver and moved to New York to become a cabbie in 1992, before moving to Greensboro, N.C.

“And I told my three kids my whole life story,” Gurmit said. “I told them everything.”

So when his father came downstairs that October night, R.J. expected a scolding.

But he’d heard it before: Community members would come up to him in temple. “You’re going to ruin your parent’s name in the community and whatever hard work your dad has done. You’re going to throw it in the trash because you’re about to take this chance.”

They’d claim that this isn’t “what we do,” R.J. recalled. After all, 55 percent of second-generation Americans from Asia have a bachelor’s degree or more, according to a 2013 study by the Pew Research Center.

But R.J. didn’t receive a scolding that night. Instead, Gurmit said he’d done everything he could to direct his son down the right path.

Eased by his trust in god, Gurmit said it’s up to his son to make the life for himself.

“I told him, ‘Your life,’” Gurmit said, shrugging. “‘I’m not guilty. Because (God) is in you. He knows what’s happening and what you’re doing. I did everything, give money and everything to get you an education. But if you don’t, it’s up to you.’”

The next morning, R.J. found suitcases in front of his front door. His parents helped pack them. R.J. felt like his parents were challenging him—that they were trying to make certain that he saw pursuing this dream worth the sacrifice it required. In the moment, R.J. recalled, it felt like he was getting kicked out. “But I was like, you know what, I’m going to embrace this,” R.J. said. “Let’s see what living on the road looks like.”

For the next three months, R.J. drove from city to city, living in his car, showering at truck stops.

“That gave me a lot of time to introspect and ask myself, ‘What the heck am I doing?’” he said.

“God is care-free.”
Five months ago, R.J. went on another trip.

This one had no business objective. It was just him and two friends road-tripping near the southern border, passing through towns like Marfa, Texas, and Columbus, New Mexico.

On the road trip, R.J. visited the Continental divide, the same line his father crossed decades earlier. He met and learned the stories of many different people— restaurant workers, bartenders, artists—who all have a different perspective to offer about immigration and America.

The trip gave color to the stories his father told him about trespassing decades earlier; it reinforced that R.J. and his father prefer different means to achieve the same, prosperous, comfortable ends.

“In the back of my head, I’m like, ‘If he came to America with almost nothing, and he was able to figure it out, I think I’ll be fine.’”

R.J. doesn’t stay at home much nowadays. He routinely flies to New York and California, dotting around the United States to enhance his already-lucrative startup, which in February 2019, R.J. said, had 750 truckers subscribed to its platform.

“I’m OK, I’m happy,” his father now says. “I was not worried … If you’re careless, you’ll ruin your life. But God is care-free. I learned to be care-free, not careless.”

R.J., much like his immigrant father once did, won’t stop running after opportunity any time soon.

Because, after all, he’s got an American dream to chase.

Alex Zietlow, a double major in political science and reporting, is currently a senior writer for the Daily Tar Heel. He spent a summer interning for The Washington Times, and plans to pursue a career in reporting. A version of this article first appeared in Media Hub, a journalism website of the UNC School of Media and Journalism.