Listening to the Voice Inside 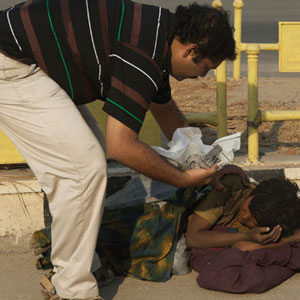 As a young man of 21, Narayanan Krishnan was all set to go to Switzerland to further his career as an award-winning chef with a five-star hotel. Instead, for close to a decade, Krishnan has been cooking for and feeding the most destitute and broken souls living on the streets in his hometown of Madurai.

Instead of creating gourmet meals for elite global citizens, Krishnan opted to serve hearty meals to the downtrodden in his own backyard. He choose as his karma-kshetra (field of action) dusty, garbage-laden streets instead of plush, carpet-lined, air-conditioned quarters. He took up the challenge of tending to the needs of the mentally disturbed and incapable, the physically disabled, and the old, abandoned folks of his city, instead of chatting up gourmet cuisine with the well-off.

Those who might think this was trading down are far off the mark. Ask him if he ever second-guessed his decision to stop himself cold on the way to a promising and glamorous career, and he responds with an emphatic “No!” “This work was started in response to an inner call and it continues to give me joy,” said Krishnan in an interview with Khabar during his recent visit to Atlanta to receive the CNN Hero Award.

The inner call came when Krishnan was visiting a temple with his parents just before departing for the culinary school in Switzerland. Outside the temple he saw a person scavenging on waste off the street, simply to survive. The scene broke his heart. Krishnan went back to feed the man and the latter’s look of gratitude and tears stirred something deep within him. The contrasts he saw between the richness of his world as a chef cooking for the well-off and the drastic plight of so many in India who are often abandoned on the streets due to sheer poverty bothered him. “Why should I work in a five-star hotel where so much food is wasted daily when people in Madurai are starving? I decided to quit my job and plunge into humanitarian service. It was a life-changing experience for me,” recalls Krishnan.

Krishnan went on to start a foundation called Akshaya Trust, with a mission to bring “hot meals and dignity” to the homeless and the destitute.

Describing a typical day, Krishnan says, “I get up at 4 a.m. Cook breakfast by 6 a.m. Load it in the van. Volunteer Mani and I feed breakfast to the mentally ill, physically disabled, and old neglected, uncared people. This ends by 8 a.m. Then we go to the market to buy vegetables and groceries and cook lunch at 10 a.m. At 11:30 we set out to feed lunch. We return at 3 p.m., clean the van, pots and pans, and start cooking the evening meal. We feed dinner and finish our rounds by 10:30 p.m. We feed three meals to about 400 people, 365 days a year, come rain or shine. We serve fresh but simple food like idlis, dosas, upma, sambar, vegetable biryani, etc. We drive about 125 miles a day serving meals.”

Due to the condition of the people he feeds, Krishnan often finds himself tending to their personal needs—bathing them, and even shaving and giving them haircuts. “Barbers refuse to attend to these people; I spent six months in a hair-cutting saloon and learnt 12 styles of hair-cutting. I always carry a comb, scissors, a shaving brush and soap with me. Though I am a Brahmin, I do not believe in upper or lower castes. I feel that these people should be accorded dignity when they are cremated. Despite protests and objections from the community I have helped with the cremations of about 300 destitute people. I believe that everyone has 5.5 litres of blood, and we all are equal.”

It is this selfless submission to a higher calling that has enriched Krishnan’s life. Even when he didn’t go looking for any rewards, acknowledgements or recognition for his work, the nobility of his work has not gone unnoticed. In 2008, he was recognized in India with a “Real Hero” award instituted by CNN/IBN along with Reliance Industries. Along with the award, he was presented Rs.500,000 (a little over $10,000) by Bollywood icon Aamir Khan. A similar amount was also donated to Akshaya by Infosys.

For his recent award, Krishnan rose to the final ten from a sea of over 10,000 nominations for CNN’s highly regarded annual list of Top 10 Heroes. He was chosen by a blue-ribbon panel charged to scrutinize and review the nominees. A CNN team that included accountants and auditors besides cameramen and editors met him over several days.

Besides the $25,000 cash that came with the award, CNN’s honor catapulted Krishnan and his Akshaya Trust to international recognition, bringing with it offers of donations and help.

It wasn’t always like that. Krishnan remembers: “When I started, I fed about 25 people a day. I used my private savings. But the numbers increased and soon the savings were exhausted. But we did not seek government grants or corporate sponsorship. We even piled up debts. But we persevered, and what we were doing began to be appreciated, and private donors began to help in cash or kind. We did not advertise. We did not incur any administration fees or overheads. It was purely by word of mouth.”

So far Krishnan and his foundation have served over 1.5 million meals. En route, Krishnan’s work has matured in its mission and scope. “In 2007 we pondered, ‘What should be our mission? Should we continue just feeding these people?’ We felt that the long-term plan should be to provide safety, shelter and an environment for rehabilitation. Safety is very important, especially for homeless women who are harassed by anti-social elements. The mentally ill and neglected old people sometimes meet with accidents or die in the streets. Many sleeping under the bridges or on railway platforms or near bus stands get bitten by dogs or suffer without proper shelter during hot weather or the rainy season.”

The foundation recently purchased a 2.74-acre plot on the outskirts of Madurai to expand their service to offer shelter and rehabilitation. The construction has already begun, and when completed, it will provide living areas, healthcare, and support for 200 men and 200 women in separate dormitories.

When asked what his message is to readers, Krishnan says emphatically, “I appeal to people everywhere not to waste food. The food that is wasted can save someone’s life. And don’t waste money. The rampant consumerism around us only invites financial hardships in the long run. I feel that if everyone donated at least 10 percent of his or her income, most of the problems affecting the poor will be solved.”