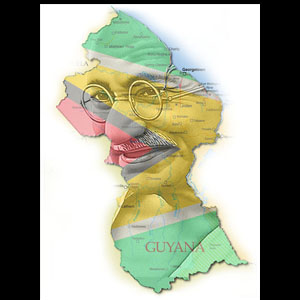 Gandhi may not have visited the U.S., but his ideas have traveled here and found ardent followers in MLK and Obama—just as they have found a huge following all over the world.

Mohandas K. Gandhi was born in Asia, educated in Europe, and worked in Africa. Although he never touched the soil of the Americas, his influence was global, and it would be a dim perception to conclude that his life and message was restricted to a few continents.

His impression on the U.S. is indelible. In 2010 in India, President Barack Obama stated that he would not have been President had it not been for Gandhi and his message that he shared with America and the rest of the world.

Martin Luther King who also visited and learnt in India stated in 1955, “Christ gave us the goals... Gandhi gave us the tactics... he influenced my life in terms of action more than anybody.” Cesar Chavez used non-violence strategy to protest the exploitation of California farm workers and showed patience when he stated that “the rich may have money but the poor have time.”

Similar acknowledgement of Gandhi‘s inspiration in Latin American and the Caribbean may not be so well known but has been documented.

Guyana and the Caribbean

The plight of indentured servants who were sent as labourers from India to replace slaves on the many plantations across Caribbean and Guyana (British Guiana) was one of the Mahatma’s many concerns. He had experienced their maltreatment in South Africa and was involved in the massive Anti-Indenture campaign that was waged in India from 1910 to 1917 resulting in the abolition of this new form of bondage.

His emissary was Reverend C. F. Andrews who is referred to, in the movie Gandhi, as Charlie. Andrews was born in England but after his missionary activities in India exposed him to blatant arrogance and racial discrimination against Indians, he found himself immersed in the struggle for freedom. He was sent by Gopal Krishna Gokhale to assist Gandhi in South Africa. He later returned to India and joined the nationals who vehemently opposed the indentureship system in Natal and Fiji.

Rabindranath Tagore won the Nobel Peace Prize for Literature in 1913. He and Reverend Andrews toured Vancouver in 1929 from where the latter left for British Guiana as the guest of the British Guiana East Indian Association which was formed in 1916 with political and cultural objectives that brought national attention to the plight of Indians. The Indian National Congress introduced him as the man who Gandhi considered a younger brother and gave him the name Deenbandhu, friend of the poor.

The children of Bharat turned out in huge crowds to hear Andrews; waiting long hours for him to finish in English and then to speak in Hindi making them nostalgic for Mother India. A dinner in his honour would attract over five hundred people. The situation described in his report, “Impressions of British Guiana, 1930” revealed similar problems among the East Indian communities in South Africa, Fiji, and even India—some of which bedevil these nations even today.

These include child marriages and illiteracy; non registration of religious marriages resulting in children deemed illegitimate; nominal priests not qualified to raise the moral standards of the society leading to gross superstitions and demoralization; religious conversion, government encouraging missionary work instead of practicing religious neutrality;  absence of Indians in the civil services and in the police forces who did not speak or understand Indian language or customs; buildings unfit for human habitation; overcrowded classrooms with few girls; Hindu and Muslim children compelled to say Christian prayers in government-aided schools; few Indian teachers in Christian run schools since many refused to change their religion in order to be employed; abundance of rum shops and excessive alcohol consumption unlike the lifestyle of Indians in northern India; non registration of voters particularly East Indian women who could not read not write the form which was only in English; poor race relations; and much more.

On the positive side, he was impressed with a few leaders there; among them was Dr. Jung Bahadur Singh, president of British Guiana East Indian Association. This stalwart of Indian culture was the first Hindu to be elected to the National Assembly; had travelled twenty four times on ships between India and Guyana rendering medical service; and who would be the first person to be cremated in 1956 at a time when cremation was not yet legal.

On July 14, 1929, Andrews officially opened Dharm Shala in Georgetown which had been established by Pandit Ramsaroop Maraj in 1921. This is perhaps the longest humanitarian mission in Guyana, and possibly the Caribbean.

Reverend Andrew's  visit lifted the national consciousness of the people and enabled the few leaders to pursue their goals with greater determination. People even came over from neighbouring Suriname to meet the Mahatma’s best friend in hope that he could persuade the plantation owners and the authorities to improve the working and living conditions there also.

Reverend Andrews left his mortal body on April 5, 1940 in Calcutta but his remarks still ring true today. He said, “I am not forgetting that conditions in large over-populated malarial areas in India are even more distressing than those I have found in Guiana. But when people leave their mother country to come abroad and make sacrifices of habit and tradition, it should at least be expected as an axiom that the material conditions to which they come, by immigration, must be superior to those they left behind.”

The author at the Indian Arrival Monument in Palmyra, East Berbice-Corentyne, Guyana.​

There are many statues of Gandhi all over the globe and several groups organise annual events to celebrate his life. However, in this age of terrorism, excessive materialism, and extreme climate change,  more must be done to teach the current as well as future generations about his message. Fortunately, there is an abundance of material on Gandhi, but for those who cannot or would not read, Gandhitopia.ca has put together a huge coffee table book Mahatma - Gandhi’s Life in Colour weighing about 15 lbs.

Every individual or organisation can be an agent of change initiating sustained educational activities promoting peace, truth, and justice. The challenge is to prove one prediction of the great Einstein wrong by ensuring that such a time never comes when posterity questions the fact that the Mahatma once graced the surface of this earth.

Ramnarine Sahadeo was born in Guyana and is now a retired lawyer residing in Brampton, Ontario. Author of Mohandas K. Gandhi: Thoughts, Words, Deeds: His Source of Inspiration: Bhagavad-Gita, he established the Jung Bahadur Singh Scholarship at Saraswati Vidya Niketan in Guyana. He can be reached at ramjihindu@rogers.com. To comment on this article, please write to letters@khabar.com.