Melting Pot of Cultures: The Hidden Treasures of Xian 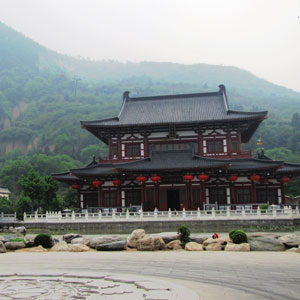 I am in one of China’s oldest cities. Called Chang’an(Eternal Peace) in ancient times, Xian was once the starting point of the fabled Silk Road and home to thirteen dynasties. Tourists come to Xian mainly to see the terracotta warriors—Emperor Qin’s army, created for his afterlife.

Imagine digging in your back yard and finding ancient weapons and bits and pieces of life-sized statues. An arm here and a leg there. That’s what happened to a farmer digging a well near Mt Lishanin the early spring of 1974. What he unearthed were eerily life-like statues which were never meant to be seen by mortals! Today, the farm is a unique museum built on the site of the excavation, which is still ongoing. The entire complex is a stretch of manicured green with silent golf carts transporting tourists across the sprawling distance. Qin’s terracotta army fills three consecutive vaults unromantically called Pits 1, 2, and 3 (named in the order of discovery).

Pit No. 1 looks like a huge stadium or an airport hangar till you catch sight of the beige retinue standing silently, as if waiting for the command to march forward. Though there are about 6,000 warriors in all, there are only about 600 restored figures.

We see rows and rows of trenches separated by earthen walls. The trenches used to be covered by stout wooden roofs and crossbeams topped with clay matting. Perhaps that’s why they survived plundering troops and grave robbers for hundreds of years. What is unfathomable is the scale and method of their creation. Hollow figures of loess and sand were sculpted (each was supposed to be modeled on a member of the real army), baked, fitted with clay-fired heads and then painted. Pit No. 1 has the common soldiers, each with a unique countenance and hairstyle. The vanguard is three rows of archers, their hair in a knot on one side. “Why the knot?” I ask Anthony, our articulate English-speaking guide. Because archers needed a view unobstructed by hair as they pull the arrow back! We notice that all the soldiers face east. Anthony has the answer. Invasions tended to happen from this direction. The army is meant to guard the Emperor’s tomb.

Anthony tells me that all guides in China are required to study for two years. If they chose to be English-speaking guides, they have to choose an English name, easy for foreigners to pronounce. I’m impressed by China’s tourism promotion. Anthony is really a fine guide and makes our Xian experience memorable.

We take a closer look at the army and see beards, locks upswept in top knots, and faces with different expressions, ranging from fierce to contemplative to proud, all in an awe-inspiring diversity of ethnicities. Some wear armours, others knee-high tunics. We admire the artistry in creating creases in the clay carved uniforms. The warriors originally held weapons—crossbows, bows, spears, and axes. Anthony tells us that the arrowheads were made of metal alloys which defied corrosion. The bronze weapons found with the officers are still sharp and useable! All the warriors were originally coloured in brilliant hues, colors which have deteriorated when exposed to humid air. We see pits where the re-construction has not yet happened and are startled by the contrast between the re-assembled warriors and their shattered counterparts. How on earth did they solve these 3-dimensional jigsaw puzzles?

Who was Emperor Qin? We watch a 360° movie in a theater on the grounds. After uniting six warring states in China Qin proclaimed himself as the first Emperor of China. He was the one who consolidated the building of the Great Wall. He standardized measurements, writing, and currencies, but he was also known as a ruthless tyrant.

Soon after he succeeded his father at age 13, he started plans for his afterlife. It is said that about 700,000 laborers toiled to create this necropolis, many dying in the process. The Emperor spent years searching for the elixir of life, ultimately dying in one of his expeditions. He was buried in a tomb here along with his concubines. The workers were buried too, so their secrets died with them.

In Pit No. 2 excavations are still going on but we get to examine some figures up close—these are housed in glass cases. A kneeling archer displays exquisite details; there are even studs on his shoes to prevent him from slipping.

Pit No 3 is the smallest but, as the command post, has the most important people—the generals and commanders with four horses. At the centre is a stone platform where the general would survey the battlefield, give orders, and lead his men into battle. In a small hall near Pit no 1, we see two bronze chariots which were excavated in 1980 and re-assembled from nearly 3,500 pieces! In the terracotta warrior museum near the theater is a bespectacled man in rough peasant clothing with a pile of books and some pens before him. We are told that he was the farmer who found the first terracotta warriors while digging a well. The authorities tracked him down, taught the illiterate man how to write his own name. For a fee, one can pose with him and get a book autographed. We trawl the souvenir shops for our own set of terracotta warriors. After much haggling I buy my set of an archer, a warrior, and a horse to keep me company back home.

The terracotta warriors are only the tip of the iceberg. Much is left to be uncovered, but no one is in a hurry to do it. Some believe that disturbing the Emperor would bring them bad luck. Archaeologists are keen to excavate the rest of this complex including the Emperor’s tomb. But fears of deterioration, as well as a belief in underground rivers of mercury there, have prevented authroities from granting the neccessary permissions. Emperor Qin’s secrets remain buried with him.

We discover that Xian has many other interesting facets if you dig deep enough.

At first glance, Xian does not look like an ancient city—there are glitzy malls and towering buildings with broad roads, even a McDonalds! There is a perpetual haze in the air—Anthony says that it’s dusty, yellow loess soil carried by the winds from Mongolia.

Xian is also famous for a big seven-storied pagoda, called the Big Wild Goose pagoda, which contains Buddhist sutras and scriptures brought back by the Chinese monk Xuanzang ( known in India as the traveler Huien Tsang). Tsang is credited with translation of translating Indian texts into Chinese and writing commentaries on them.

The name of the pagoda comes from a legend about some hungry monks. Their prayers for meat seemed to be answered when a huge goose fell down dead at their feet!

Xian has long city walls (almost 7 miles) skirted by a moat and studded with watch towers and ramparts. Local lore has it that the wall was made of earth, sticky rice, and kiwi juice and then covered with bricks.Anthony tells us that the city wall is eight horses wide—the measurement harks back to ancient times. Today, you can cycle or even walk on the ramparts.

We visit the Drum Tower in the heart of Xian. Every Ming city had two time keepers—a Drum Tower where the drum was beaten to denote dusk and a Bell Tower to indicate dawn, when a bell was struck. Nestled deep behind the Drum Tower is the Muslim Quarter and the Great Mosque of Xian, founded during the Tang Dynasty in 742.

The Muslim community has been in Xian for nearly 1,200 years, having arrived here as merchants during the days of the fabled Silk Route. This city is home to a large population of Hui Muslims; the the local ethnic community numbers almost 1.5 Million.

The Muslim area is laid out with courtyards, ancient trees, and pavilions strung together with patches of green and no minaret in sight. Pages of the Koran are inscribed on the walls—partly in Chinese and partly in Arabic. There is a pastiche of styles, an inter-mingling of cultures; an octagonal tower with wooden balconies, floral stonework, Chinese lanterns, red pillared pavilions, Arabic calligraphy, and blue glazed tiles. The dragon, a Chinese motif, is used in the pavilions and the minaret is a pagoda. The turquoise-roofed prayer hall is open only to Muslims; its inside is lined with wooden boards carved with the verses of the Koran.

We linger at the atmospheric market behind the mosque with its clamor and drama and walk the warren of backstreets—there are men with white skull caps on bikes, butcher shops, women with scarves and hijabs, and an incredible array of street food and lines of stalls selling souvenirs ranging from chunky beads to communist kitsch like Mao’s Red Book. There are various representations of the terracotta warriors—from tacky plastic dolls to clay replicas to T-shirts with the iconic images. Dates, dried walnuts, and various other nuts and aromatic spices are piled in huge pyramids. Sizzling kebabs, dumplings, and glutinous rice pudding are sold side by side, another indication of the mélange of cultures that is here. Wizened old men play chess and drink the ubiquitous cups of jasmine tea.

Xian’s well known cuisine is the dumpling—you can indulge in over twenty kinds of dumplings, with stuffing ranging from spinach and pork to nuts. Pomegranate is the favorite fruit of this city and we see pomegranate wine on sale nearby.

It’s a short drive to Hua Qing hot springs, an ancient spa where the emperor and his concubines spent the winter months. This is ringed by misty mountains, and the location is picturesque and romantic. There is imperial splendor everywhere—tiny gazebos, a lake called the Nine Dragon Pool, gargoyles on buildings to protect them from evil spirits, and roofs with dragon motifs. Families with children relax in the grounds and soak in the ambience. There is a huge swimming pool-like bath where the emperor used to relax in the waters of the hot spring. A voluptuous statue is that of Lady Yang, on of the emperor’s concubines. Poetic names are everywhere—Hall of Fluttering Frost, Lotus Flower Pool. Lady Yang was briefly married to the Tang Prince before her father-in-law decided to make her his favorite concubine! We approach the Fountain of Youth. For one yuan we get to dip our feet in a special section of the hot springs, which is succor for our tired feet.

The Disneyesque Tang Paradise is a recently built 1.3 billion yuan cultural theme park which celebrates the Tang Dynasty (A.D. 618-A.D. 907). The Tang Dynasty was a golden age of song, dance, art, and poetry. The theme park features an artificial lake with schools of goldfish, bridges, performances of drummers, stilt walkers, and myriad places to just relax and enjoy the landscaped gardens and pavilions. We catch the “Dream back to the Tang Dynasty Show” at the Phoenix Theater. The show is an explosion of color, with multi-colored costumes and amazing choreography. There is sword play set to the sound of traditional music and instruments. The show is an esoteric mix of ballet, gymnastics, acrobatics, and opera with a dragon dance thrown in for good measure.

As we drive out of Xian that night, the city walls are resplendent with red lanterns. We are caught for a moment between history and reality.

The author is a Japanese language specialist and travel writer based in Chennai, India