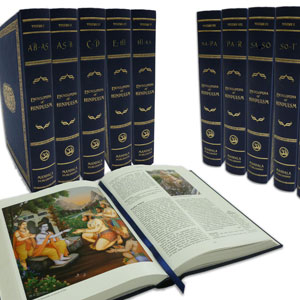 The work of over 1000 scholars, 25 years in the making, the Encyclopedia of Hinduism was launched recently at the University of South Carolina.

Vasudaiva Kutumbakam—“ The World is One Family”—is one of the basic tenets of Hinduism.

And in August this year, when the international edition of the Encyclopedia of Hinduism was unveiled, it looked as if it had taken the whole world, working as one family, to bring to fulfillment a project that was 25 years in the making.

A Hindu swami in Pittsburgh first thought of it, a university in South Carolina offered to help with it, and over 1,000 scholars from around the world worked on it. The result of it all was the magnificent 11-volume edition that visitors could see and admire at the launch at the University of South Carolina in Columbia.

Seeing and admiring was pretty much all one could do there. To really appreciate the grandeur of the work that has gone into the collection might take years. Overflowing with 7,000 articles on Hinduism and over 1,000 illustrations and photographs, the encyclopedia covers an immense range of topics that cover spirituality, art, philosophy, politics, sciences, social movements, and women’s studies. Contributors include historians, curators, professors, and spiritual leaders.

Conceived by Swami Chidanand Saraswati of the India Heritage Research Foundation, work on the collection first began in the Hindu Jain Temple of Monroeville, a suburb of Pittsburgh, Pennsylvania. The swamiji was convinced an encyclopedia of this magnitude was needed to “provide our children, and our children’s children, and all the children of the world with an authoritative, informative, insightful and inspiring source of reference for Hinduism.” So he turned to Dr. K.L. Seshagiri Rao, Emeritus Professor of Religious Studies, University of Virginia, appointing him editor-in-chief of the project.

Soon, the need for more infrastructural assistance was felt, and Hindu community leaders turned to Dr. Hal French of the Religious Studies Department at the University of South Carolina. The university was supportive, and provided the academic infrastructure, offices, a library, and other facilities to house the scholars working on the project.

Dr. Meera Narasimhan, Vice Dean of the USC School of Medicine and Chairman of the Department of Neuropsychiatry, played a key role in the project. She served as liaison between the university and the India Heritage Research Foundation, often traveling to Rishikesh in India for the work. “As an Indian-American, I have been strongly influenced by Hinduism, a melting pot of spiritual, philosophical, and cultural ideas and practices that originated in India. As a physician trained in Western medicine, it provided me with an abundance of knowledge to help better understand the mind-body-spirit connection that is key in understanding health as it pertains to disease and wellness. As a gamecock at the University of South Carolina, I am thrilled to have our institution hosting the official launch of 11 volumes of the EOH here at USC,” she said. 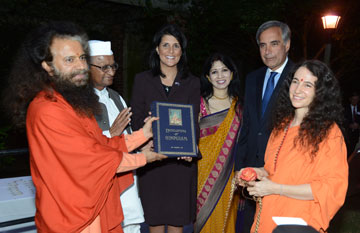 This momentous unveiling of the Encyclopedia took place at the residence of Dr. and Mrs. Pastides. The gracious hosts went all out in enhancing the sensibilities of the occasion. Mrs. Pastides sported a beautiful turquoise sari; the food was all vegetarian. Dr. Pastides surmised the significance of the project when he said, “It has been a distinct pleasure for the University of South Carolina to be a part of such a historic project that would help provide a better understanding of the Hindu tradition in the global context for generations to come.”

The Encyclopedia of Hinduism is comprised of 12 topics: