The Aesthetic Grandeur of Mughal Gardens 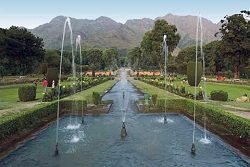 For the emperor himself, the garden space was an exterior imagery depicting the grandeur of the imperial power, while for the mystic and religious minded, its serene landscape embodied the concept of the Charbagh (four gardens) or the even older concept, described in the Book of Genesis, of a river that ran out of the Garden of Eden and thereafter, parted into ‘four heads’. Paradoxically, this highbrow thematic connection with ideology completely sloughs off when one is actually inside one of the Mughal gardens. What strikes one at that time is the manner in which the space has been arranged for both utility and ornamentation. The engineering skill of constructed water channels to irrigate the garden forms its rigid persona. On the other hand, the planted fruit trees and exotic plant species growing luxuriantly relay a comfortable duality of form and freedom.

Currently, these gardens might have outlived their horticultural importance as fruit orchards or botanical exhibits, but their close link with agricultural traditions lives on, as these spaces were outstanding examples of water utilization. Their rectangular arrangement is the most economical way of irrigating land. Instead of letting these channels run mundanely the Mughal penchant for aesthetics exploited this essential element into the focal point of their garden art.

Using feats of engineering, visual appeal and even aural accents the water was made to descend into the garden from a height, simulating the effect of a cascading waterfall. Dismissing notions of creating the wild outdoors, these channels were contained within a stone cascade, which had its sides carved, with the wash of the stream running over these designed engravings. In the moonlight, when the carvings were obliterated, the pearly luster of the water element suggested a living force, caressed by the surroundings.

Who then were the builders of these gardens? Apart from the emperors themselves, it was the princesses of the royal household who have left their mark on garden building in Mughal times. The very ﬁrst signiﬁcant one of them was Hamida Banu Begum, the principal widow of Emperor Humayun, who had ordered a garden to be laid around the tomb of the late emperor. It became the ﬁrst tomb garden in India, with its 30-acre premises adjoining the banks of the river Yamuna. While incorporating the Charbagh design style of Emperor Babur, its square grid was subdivided with the help of water channels. A wall built of rubble surrounded this piece of paradise. Centuries later, other princesses of the royal household, notably the daughters of the Emperor Shah Jahan, pursued the art with aplomb.

Princess Jahanara carried the tradition to the town of Ambala, located at the water divide between the Ganga and Indus river systems. Her sister Roshanara has left behind Delhi’s Roshanara Bagh, earlier a surround of dense forestry, creating an oasis of peace away from the intrigues of the Mughal court. At about this time, one of the Emperor’s wives, Akbarabadi, built a garden in Delhi’s Shalimar Bagh. It was a replica of the garden by that name in Kashmir.

Not just pleasure retreats for royalty, the Mughal garden also symbolized territorial control. The emperor resided in this orderly space, and every blade and every bough grew and was nurtured at the emperor’s behest. Naturally, ceremonial occasions of importance were preferably held in the garden, explaining why Aurangzeb chose to be crowned at the Shalimar Bagh, rather than the grander Red Fort, built by his father.

In life as in death, the garden complex of the Mughals was to serve the emperor in equal measure. Hence the plants for these gardens were chosen with a view to keeping alive the idea of eternity. The dark cypress tree symbolized the dark unknown, or death. It was invariably intertwined with a ﬂowering creeper or a rose in bloom, symbolizing life. The cycle of life, and the continuation of eternity, was even engraved in stone as is evident in the ﬂoral inlay adorning the Taj Mahal.

The setting for these cameo-like spaces of greenery was another astute aspect of the Indian Mughal gardens. They were showcased beside the bank of a river, nestling at the bottom of a hillside, or overlooking a valley. Of the latter, the best example is the garden built in Kashmir, between the surrounding hills of the valley and beside the largest natural lake of the state, the Dal Lake. The ﬂow of water from a height gives the feeling of life coursing through the veins of greenery. The placid lakefront and the progression of majestic chinar plantings simulate the approach of the emperor.

Sans hills, the garden drew its strength from the adjoining riverfront. The river ﬂowing beside the Taj entombed the mausoleum almost womb-like, while the walls demarcated the hustle of the bazaar and the dusty expanse of the Yamuna plains beyond. Similarly, the gardens in forts and palaces offered a panoramic spread overlooking the countryside. It was an uninterrupted view of one’s conquest as one gazed at the sprawl at the foot of the citadel.

Gradually from being scenes of grandiose ceremonies, sources of indulgent pleasures, resting places of the high and mighty, the garden became a place for interpreting the colonial presence. When Delhi became the capital of India, the architect Lutyens designed a Mughal-style garden in the Viceregal Palace, now known as the Mughal gardens of Rashtrapati Bhavan. In its architectural setting the garden of the 20th century interprets the traditional Mughal garden technique by enclosing the space within a walled compound. Water channels running north to south and east to west divide the rectilinear plot into four, while the borders of annuals hark back to an English country garden. Instead of becoming a medley without a motive, it is the Mughal element in this garden framework that works as its holistic formula.

And it is this ability to incorporate into its fold the adjustments of the times that makes Mughal gardens such a resilient entity. Begun as a beloved imperial pastime, the Mughal gardens are now blueprints of formal layouts.

[Shubhra Mazumdar is an arts writer. Reprinted with permission from India Perspectives.]