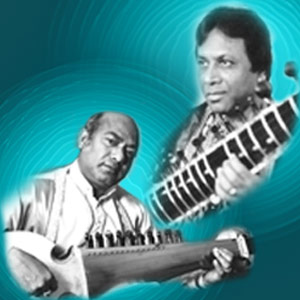 
There is often an element of naïve hero worship for the ﬁrst musician who taught you a particular style, but introduction to other musicians often cools that initial enthusiasm. Although I still greatly admire fusion guitarist John McLaughlin, most of what I thought he had created was simply Indian rhythms transposed to electric Western instruments. This was an impressive accomplishment, but not the revolutionary step I had thought it was. I was similarly dazzled when I began to study with Ali Akbar Khan (or Khansahib, as he was respectfully addressed). There was, however, no such disillusion with Khansahib when I studied other Hindustani musicians. On the contrary, other musicians made me fully understand for the ﬁrst time just how revolutionary Khansahib was. Every other Hindustani musician I listened to or studied with seemed to be following the same underlying patterns, and the more Hindustani musicians I listened to, the clearer those patterns became. Khansahib, in contrast, was stretching these patterns up to, and sometimes beyond, their breaking points, then rearranging them into new patterns that made perfect sense. It was, however, impossible for me to hear the patterns that he was breaking until I had heard dozens of other musicians keeping them. It reminded me of something that Zen master D.T. Suzuki had said to his American Beatnik students: “you need to learn a teaching before you can throw it away.”

Many of the most renowned Hindustani musicians actually perform within a structure very similar to one
that Khansahib created for our exercises and lessons. These exercises always began with a series of gats, or
main melodies. There were then variations on each gat which traveled rhythmically and melodically through
different parts of the scale, then returned to the mukhra, or opening pickup phrase. This pattern, and others like it, are frequently followed in performance by Amjad Ali Khan, whose lineage branched off only recently from Khansahib’s (their fathers had both studied with Wazir Khan of the Seni gharana). Khansahib was starting from the same patterns, but had traveled so far from them that for years I couldn’t see the connection. I eventually realized that if I made up patterns that sounded like Khansahib’s classroom exercises, I sounded somewhat like Amjad Ali Khan’s concert performances. This was a glib oversimpliﬁcation, but it had just enough truth to give me hope that I might actually be able to perform

Hindustani music someday. For years, my goal was to ﬁnd these kinds of patterns in everyone else’s playing,
and use those discoveries to keep my own improvisations both authentic and creative. I also studied Khansa-
hib’s classroom compositions over and over again, but made no real attempt to approximate his concert per-
formances. This, I thought, was enough to ﬁll at least one lifetime.

Recently, however, I discovered another great musician who—if you’ll pardon the deliberate paradox—
shares Ali Akbar Khan’s uniqueness. Shahid Parvez and Ali Akbar Khan each broke the boundaries that seem to deﬁne everyone else, but each did it in a different way. I could hear these differences, but couldn’t understand them, and this was an enigma I had to unravel. Against all ﬁnancial prudence and common sense, I left a city where I could study with the greatest living Indian musician, and instead paid thousands of dollars to ﬂy to Boston, live in a hotel, eat in restaurants, and take a daily taxi to class with Shahid Parvez. Would I really learn anything that I wouldn’t learn by going to the Ali Akbar College of Music (AACM)?

For the ﬁrst several days, it didn’t seem like I was learning anything at all. The years I had spent studying with Khansahib had ﬁnally produced a set of natural reﬂexes that enabled me to pick up standard Hindustani
patterns fairly quickly—and none of those reﬂexes were working with Parvez’s patterns. It felt like I was  back in my ﬁrst week at AACM in 1985, when three-year-old Alam Khan was singing next to me, and learning faster than I could. I asked a senior student to transcribe the lessons for me, but Parvez’s lineage used a form of sheet music that was very different from the one taught at the AACM, and seem to contain far less  information. By the end of the week, I had almost learned the gat, but no variations. For the next several months, I tried to make sense of several hours of class recordings.

There were three main reasons I continually misheard Parvez’s compositions. Firstly, Parvez started the mukhra, or pickup phrase, differently for each variation. This meant that ultimately there was no real  difference between the mukhra and the rest of the gat. The variations could start anywhere and end anywhere else. Secondly, Parvez’s compositions sometimes make very subtle shifts with each variation, which meant I was sometimes unwittingly trying to learn two different melodies at the same time. And ﬁnally, Parvez used extended cross-rhythmic variations which made it almost impossible to identify the underlying taal cycle.

Despite these innovations, there were other ways in which Parvez’s music is more conservative than Khansahib’s. Parvez never used “enemy notes” outside the raga, or the wild leaps which Khansahib called “destroying the raga.” Parvez’s melodies always stick very closely to the key melodic phrases of raga, and he often quotes long sections from his classroom exercises in his concerts. Thus despite the complexity of Parvez’s music, there was a clearer connection between his performances and his teachings than in Khansahib’s music.

Today I am ﬁnally learning something about this connection in Khansahib’s music, thanks to a new teaching innovation pioneered by his son Alam. We start in a raga where we already know several compositions, then Alam plays along with each of us individually and comments on our playing. The class never quite goes the same way twice, and Alam is often apologetic for the lack of structure. The fact remains, however, that every class has at least one “aha” moment for me, where I ﬁnally understand something I have been vaguely hearing for years.

For lessons with Shahid Parvez : www.spkacademy.org

For lessons with Alam Khan and other teachers at
the AACM: www.aacm.org

Teed Rockwell, a student of Ali Akbar Khan, is the ﬁrst person to play Hindustani music on the Touchstyle Fretboard.  Source: India Currents.