Musings : Creating Links and a Lineage 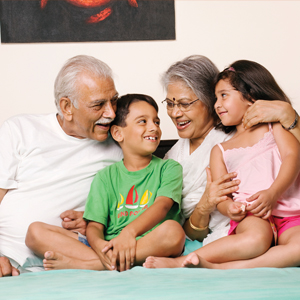 As an immigrant parent, the author lamented her shallow roots in the U.S. and regretted that her kids couldn’t be close to their grandparents. Now that she’s a grandmother herself, she wants to make sure that her grandchildren don’t miss out on the precious connection across generations to culture, language, and traditions.

In Hillbilly Elegy, the Netflix film based on J. D. Vance’s book, his grandmother, Mamaw, steps in when his mother becomes unable to provide a stable home. Mamaw is an acerbic no-nonsense woman who has had a hardscrabble life. Through gruff words that are softened by her many sacrifices, she shows J. D. that she loves him and is prepared to do anything for him. By holding him accountable for doing his homework, she succeeds in setting him on a path to success in school as well as in life.

On the surface, I have virtually nothing in common with the Vance family. I grew up in Mumbai, the biggest metropolis in India. I come from a middle class family. Even though our home was small and had only the most basic amenities, I never faced instability or want.

And yet, as all great storytelling does, I found the relationship between J. D. and Mamaw compelling, inspiring, and moving. I could almost taste the young J. D.’s dawning appreciation of his Mamaw, just like I could Mamaw’s “mama bear” commitment to him.

This is because I too had grandparents who loved and nurtured me. Their gentle presence and the connectedness I felt as a result gave me strong roots as well as wings. It is no surprise that I have an almost visceral appreciation of the special relationships that can form between grandparents and grandchildren and the benefits such relationships bestow on both.

In fact, this is exactly why I recently moved from the East Coast of the U.S. to the East Bay. The pull was my infant grandson and the push was the pandemic. The thought of not being able to see my children and their families for potentially years was too painful to contemplate.

However, as much as I wanted to know my grandson and wanted him to know me, I had another set of equally compelling motivations. I immigrated to the U.S. as a twenty-something, newlywed professional almost four decades ago. At the time, life seemed like a grand adventure, with much to explore and master, and a sense of exuberant possibility. While this was the pull that made living in America an attractive proposition, the push was the social and economic situation in India, which at the time seemed drab and limiting.

And so, I willingly took on the challenge of raising children without the support of a near-at-hand extended family. I knew other young Indian families that had performed the same calculus and had arrived at the same answers. So, the choice I made was not particularly out of the ordinary. However, it was only over the ensuing years that the true implication of being a lone nuclear family became clear to me.

For example, each year on the first day of school, the children would come home with emergency contact notecards. Each year, I would call a neighbor or the mom of one of the children’s friends to ask if they could be that contact. Although these friends and acquaintances were, without exception, kind and understanding, the reality of my family’s vulnerability was undeniable.

I longed for extended family living nearby whose commitment I might take for granted. Not just a taker, I wanted to be able to provide them the same care and engagement. The annual ritual of the emergency contact cards underscored the fact that my family had no one with whom we shared kinship, language, culture, or traditions. What had started out as an adventure of perpetual self-reinvention now felt less so.

Other life events continually reinforced this awareness. When we bought a house, there were no elders to share our joy. When the children had birthdays and graduations, there was no one to commend and applaud them. Worse, there was no one to step in and provide backup in the case of illness, a delay at the office, or a snow day. No one with whom I shared a past shared my present or my future. No one with whom I shared the present shared my past.

A big part of my regret was what my children were missing. I felt this more than they did. After all, how could they miss something that they had never had (and that many of their peers also did not have)? But I had an abundance of cherished memories of being cared for by my grandparents. It was at my grandmother’s knee that I learnt the Marathi alphabet and heard stories from the Hindu epics. It was she who massaged my painful feet with oil when I came home at dark after playing in the courtyard all afternoon and evening. And it was her I ran to for comfort and understanding when my mother got mad at me.

As for my grandfather, his was a silent but no less present love. A retired schoolteacher, he walked me to school every day. In addition to devotional shlokas, he taught me English and math. One morning, he had dropped me early at school because my class was going on a day trip. When he got home, my grandmother told him that I had forgotten to drink my daily glass of milk. So he turned right back around with a jar of warm milk in his hand. Handing it to me through the window of the school bus, he waited while I gulped it down.

It pained me to know that my children would never know such a constant nurturing presence. Even if I tried my hardest, I was not sure I would be able to conjure up the kind of deep roots that hold a person close and keep her from feeling lost.

And so I silently and repeatedly reassured myself that, when the time came, I would be a hands-on grandmother. I wanted to do this for my grandchildren as well as for my children. And for the yearning mother I had once been.

Most important, I was aware that my family’s roots in this country are shallow and that, being transplanted in foreign soil, they need extra care and tending. By carrying forward the rich legacy of grandparenting, in moving from the East Coast to the West Coast, I hoped to do just that.

The big move was not an easy one. Considering the cost of first storing our belongings for several months and then moving them cross-country, my husband and I decided to jettison almost all of them. I left behind a close-knit community of friends and neighbors. There were moments when I wondered about the wisdom of the upheaval I had set in motion.

Amazingly, during the early weeks after the move, I came across content that validated my decision. Among these was an interview of Dr. Leonard Sax, author of The Collapse of Parenting. He asserted that while cultures vary enormously from one to the next, there is one thing that all enduring cultures share: they all have strong bonds across generations.

The most astonishing discovery was a podcast conversation between J. D. Vance and Eric Weinstein. Both men’s wives happen to be Indian-American. Both shared the fact that, when their children were born, both mothers-in-law “showed up in a huge way.” Eric’s mother-in-law moved in because, as she put it, “you need to learn how to do this.” J. D.’s mother-in-law, a professor of biology, took a sabbatical, moved in, and took care of his child for a whole year.

Like those two grandmothers, now that I have moved, I have become the nurturer that I had promised myself I would be. When I watch my grandson several days a week, in effect, I provide my daughter and son-in-law the support that I did not have as a young mother. Each time I hold the baby and each time I massage his body with oil, I feel that I am blessing him with the very hands (mine) that were once held by my grandmother. Knowing that I am carrying forward my grandparents’ ethos, values, and traditions is priceless.

The words of J.W. Freiberg, author of Surrounded by Others and Yet so Alone, have become my new touchstone: “While parents and children make a family, it takes grandparents to create a lineage.”

Nandini Patwardhan’s biography of Dr. Anandi-bai Joshee, the first Indian woman who became a doctor, was published this year by Story Artisan Press, which she co-founded. She lives in California.