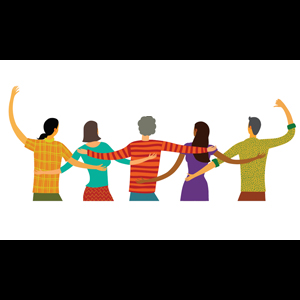 Whether the lack of connection with others is because of the pandemic, or due to language barrier in a foreign land, even our most joyous festivals can be lifeless if there is no one around to share them with.

A decade ago, when we moved to Atlanta, we had no social circle to speak of. We were newcomers, without a network of old friends or family close by. But over time, we have made connections; and for the last few years, I have enjoyed inviting guests home for Holi and Diwali.

Last year’s lockdown happened just as I was planning a Holi get together. Disappointed, I consoled myself with the thought that there would be other occasions to celebrate later in the year. But Diwali came and went, and we were still in social isolation. No amount of mithai, video calls and virtual greetings could recreate a festive mood.

This lonesome affair reminded me of another time when we were starved for company—not because of a pandemic, but because we had just come to live in Rizhao, a city on China’s eastern coast. My husband’s company had moved us there. In those early days, it was a small set-up. The entire office staff was made up of three people—my husband Ravi, and two young Chinese men who worked as his assistants. Apart from those two, we did not know anyone in town. And it did not help that I did not speak the local language.

Rizhao, as the information board by the seaside told us, was a tourist attraction. This city in China’s Shandong province has wide golden beaches along the Yellow Sea that attract holiday makers all through summer. Photo booths and souvenir stands lined the edges of the beach, and across from it stood a village. On both sides of the road leading up to it, there were open air stalls with fish tanks full of variety of sea food. Customers made their selection, and the dishes were freshly prepared for them. Often visitors came as families and it was heartwarming to see grandparents alongside grandchildren, out for a day at the beach.

But summer soon came to an end and the food stalls packed up. A slow change came over the complex where we had rented a pretty villa. As the days progressed, each evening, when I made my way back from the beach, one more house would be in darkness. Little did we realize when we had rented, that most of the villas were occupied only during summer. These were secondary residences of wealthy folks from out of town, and now as autumn set in, the place wore a deserted look. 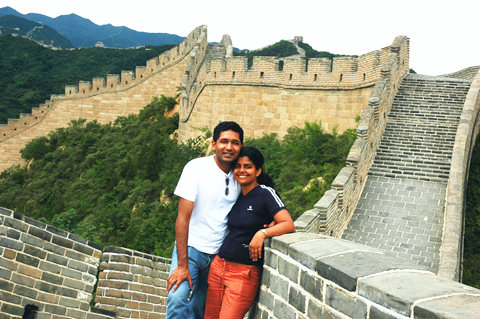 Our plans for Diwali that year were to go spend a few days in Shanghai with a family that always made us feel welcome. Ravi’s boss Raj and his wife Mitali opened their hearts and home to us all the time, making sure to invite us for occasions like Diwali and New Year. These visits went a long way to ease some of the loneliness that came from living far away from home.

[Right] ] The author with her husband. From their time in Rizhao, a city on China’s eastern coast.​

But as it happened, it was just the two of us on Diwali day. I wore a saree for a video chat with family and decorated a tray with diyas. It felt strange to be in a place where there was nothing to mark the festival—no lights or fireworks in the neighborhood, no guests at home. It felt quite dreary.

At that time of the year, the weather was still not too cold for my walks on the beach, and much as I enjoyed having the place to myself, I missed seeing people. To remedy that, every few days I would make my way to town. I’d visit markets, more for the sake of being part of the bustle than buying things.

A couple of months later, the whole town was decked out in red and gold—it was the Chinese New Year. Stores crowded with people shopping for food and gifts, as traditional decorations came up all around. The festive atmosphere reminded me of Diwali shopping back home.

During my outings, I attracted a fair bit of curiosity.  Rizhao was not Beijing or Shanghai where the residents were blasé about foreigners in their midst. Here, people wanted to know where I was from, and what had brought me to China. Armed with a phrase book, I tried my best to answer questions, reading out words to construct replies. But without the appropriate tones, many of my sentences must have sounded strange to my listeners.

The best exchanges turned out to be the ones with the staff of a shipping company in the same building as Ravi’s office. That was a young crowd; to me they seemed like they were just out of college. Our conversations were a hodgepodge of my rudimentary Mandarin, their halting English, and a whole lot of pantomime which caused much hilarity.

Like in other Asian countries we had lived in, the biggest association with India was Bollywood. In Jakarta, taxi drivers would burst into Shahrukh Khan movie songs when they heard I was from India and each time I went to the market, at least one stall owner would sing the biggest hit of that time, Kuch Kuch Hota Hai. My young friends in Rizhao didn’t try to sing Bollywood songs but they would try their best to mimic some of the dance gestures, comp-letely fascinated by the song-and-dance routines of Hindi movies.

One day Ravi came back from office with a gift hamper from one of the best hotels in the area, Shangri-La Hotel in Qingdao. It had a variety of delicacies, many of which my vegetarian eye could only identify as pieces of meat, without any idea of what they were and how they were prepared. They were all vacuum-
sealed, and packed in a beautiful box with red and gold design. I was loath to throw away the food but didn’t quite know what to do with it.

And that’s how these young office workers came to be the first guests I invited to our house. As we lived far from the center and there were no buses to get there, Ravi brought them home in taxis. Three taxis rolled into our street and I stood at the front door, feeling very much a VIP. It was almost as if this was a motorcade in my honor!

I had bought food from the supermarket and served it along with Shangri-La Hotel’s offerings. Ravi opened a bottle of baijiu, a Chinese liquor. As the evening wore on, with the effects of good food and drink, my Mandarin became more proficient, our guests' English more fluent, and the conversation much more animated. I sat back for a moment. The sounds of their voices and laugher filled the room. It felt like a true celebration.

Atlanta-based Aruna Padmanabhan is a freelancer who writes about her penchant for travel and culture. She can be reached at aruna.padmanabhan@gmail.com. To comment on this article, please write to letters@khabar.com.