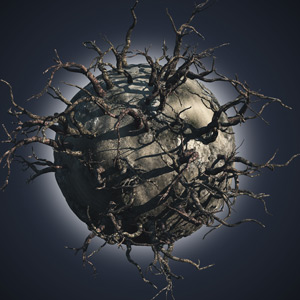 Contemplating an impossible world, and a world of possibilities—from the tranquility of “God’s Own Country.”

On a hopeful day after Christmas in Kochi, I am reflecting on what a solar eclipse means to me. While I can focus on the darkness, given the many blessings that have come my way I prefer the light. Perhaps it is merely the spirit of the season that has given me hope in what otherwise has been a rather dispiriting close to the past decade for far too many humans and animals suffering from man-made crises. Or perhaps because, here in Kerala, I’m reminded of the diversity that has long been India’s strength.

This inclusive sense of all religions sharing India as a welcoming home is reflected in a favorite ditty of mine from Manmohan Desai’s film Amar Akbar Anthony:

This is the first time in nearly two decades that I have not spent Christmas Eve at the Stanford Theater on University Avenue in Palo Alto, California. My family has made a tradition of going to see a film quite different from Amar Akbar Anthony, but one with a similarly hopeful heart: It's A Wonderful Life, the holiday classic directed by Frank Capra.

My family missed seeing our favorite Christmas movie because we were in Cherai Beach, at a resort some 45 minutes north of Kerala’s Cochin International Airport (COK). We were having a reunion of sorts, with family in India coming from Hyderabad, Kolkata, and Pune, and family from outside of India coming from Australia, the United Kingdom, and the United States. It has been a time of great joy, but I find myself reflecting on the past “dumpster fire” of a decade. 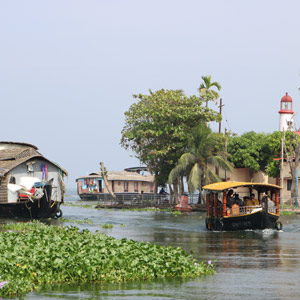 (Left)Amidst the pristine beauty of Kerala, the author ruminates about the depressing trajectory of the world—from global warming to global leaders who seem to be competing with each other to tear down our humanitarian values.

I’m usually a hopeful sort, but as I look back over the past ten years, the metaphor that haunts me is a heartless fire. I smell this place that I call home burning. Home is India. Home is America. Home is Earth.

Our planet is literally on fire. According to nasa.gov, “The world is getting warmer. Whether the cause is human activity or natural variability—and the preponderance of evidence says it’s humans—thermometer readings all around the world have risen steadily since the beginning of the Industrial Revolution.” The website proceeds to ask (and then answer), “But why should we care about one degree of warming?” I think each of us must answer that question in our own way. 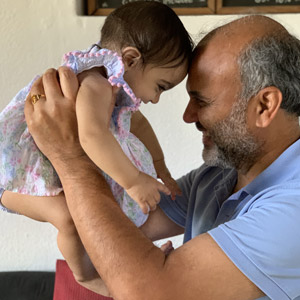 (Left) The author with his granddaughter, Eshni.

For me, it’s not just the earth science, although that, too, is vitally important. It is about the world that my granddaughter, Eshni, will inhabit long after I am gone. Already, I am distraught about the fact that while she was in New Delhi, Eshni was smoking nearly 50 cigarettes each day. Okay, my daughter and son-in-law’s nine-month-old baby wasn’t actually dragging on several packs of Marlboros or Charminars, but she might as well have been. The smoke in the capital of the country of my birth is intolerable and getting worse. I can barely imagine what is worse than intolerable. Unlivable?

And the United States is not much better. Although we Americans don’t have the daily visual clues to tell us that our planet is burning, I as a Californian can attest to the fact that the blue sky is a false harbinger of things to come if we don’t manage the change of climate change. For two weeks last year, I could not step out of my home without tearing up. Yes, I’m an emotional sort who is easily moved to tears in sentimental Bollywood and Hollywood movies. But these weren’t filmy tears. No, the sun in my gray sky was eclipsed by smoke from fires burning thousands of acres over 100 miles away. The sting of the smoke caused the tears and required me to wear a mask so that I could breathe. And if we can’t breathe, our world becomes unlivable, acre-by-acre. California’s thousands of charred acres have now given way to Australia’s millions of scarred acres. I take in the smoky air and choke at the impossibility of doing anything substantial about climate change.

When troubled by national and international issues, I look to good governance to save the day. Surely the United Nations or the Prime Minister of India or the President of the United States have the foresight to envision a world that is habitable for my little Eshni. Hooray for the UN. The United Nations Framework Convention on Climate Change has a fine objective to “stabilize greenhouse gas concentrations in the atmosphere at a level that would prevent dangerous anthropogenic interference with the climate system.” If this were baseball, I would be shouting, “Hip, hip, hooray! Let’s put the UN Secretary-General into the Hall of Fame!” I would throw a parade for our collective grandchildren’s happy future world. Well, it seems that the UN does throw parties of a sort. Year after year since 1995, there has been a Conference of the Parties. And year after year, the climate gets hotter and hotter. Protocols such as the Paris Agreement are ratified and rejected by the countries of my birth and citizenship.

America and India’s positions on the protocols are quite telling and put one nation firmly in a disquieting Hall of Shame and the other in a disorienting Hall of Mirrors.

Trump’s United States is a rejecter of the protocols. Modi’s India is ostensibly a supporter. Both Trump and Modi remind me of those afflicted with the disease of hubris that has them looking directly at a solar eclipse as if their retinas could withstand fire.

In his first year in office, President Trump said, “The Paris accord will undermine (the U.S.) economy,” and “puts (the U.S.) at a permanent disadvantage.” Donald Trump moved the needle from intolerable and unlivable to unthinkable. Midway through Trump’s term, The Atlantic Monthly listed some 50 unthinkable acts that characterized the Trump Presidency. In essence, while the earth burns, Trump fiddles on his many incendiary interests including the following from the past 12 months: building a wall at the US/Mexican border, adding trillions to the fiscal deficit, overseeing a contraction of domestic manufacturing, threatening and waffling on tariffs, recklessly executing an unethical—if not illegal—assassination of a foreign official to gin up a war to win votes, and responding to the inquiry of impeachment with a multitude of distracting lies.

On paper, Prime Minister Modi is the anti-Trump, almost an exemplar of climate change leadership. He has done much to champion India as a global green leader; indeed, one can see solar panels floating on acres around COK, making Kochi’s airport the first in the world running fully on solar power. But despite his laudable renewable energy investments in solar and wind farms, the Prime Minister was a reluctant signatory to the Paris Agreement; he has argued that as a developing country focused on giving her citizens a better life, India must not be constrained from investing in coal and other dirty fossil fuels. There is much truth to the position that emerging economies merit dispensations not afforded to countries which developed during the Industrial Age’s plunder of the earth; but one must ask questions about Narendra Modi’s commitment to giving all Indians a better life.

What is the Prime Minister’s philosophy of social justice? What are his intentions to make India not only a global green leader but also a moral leader? Why does his office in Delhi encourage policies that are Hindu-centric rather than Hindustan-centric? Perhaps the Modi Ministry could benefit from a rereading of Section 420 in the Indian Penal Code to clarify its disambiguation in how Muslims are treated as a source of terror. Certainly a unified India would be more influential on the world stage if her fissiparous tendencies did not distract from the real terror of global warming.

While it has been lovely to celebrate time with family on the tranquil waters in what Keralites call “God’s Own Country,” inevitably all of us want to return to our wonderful lives in Pune, Melbourne, London, Kolkata, Hyderabad, and California. None of us desire a world where we, or our brothers and sisters, are climate refugees, or refugees of any sort seeking to escape home due to persecution of our race, religion, or sexual identity. How about we convey our belief in the art of possibility and translate “Amar Akbar Anthony” for the next generation of (grand) children making Planet Earth their home?

We make the impossible possible and the possible impossible!
Together in one place, we three stand united:
Eshni, Ayesha, Emily.