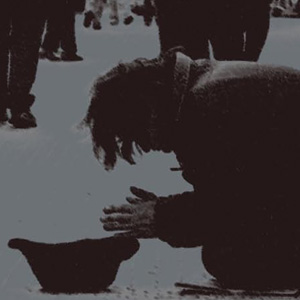 Of human depravity, excess, and one’s decisions about it.

I‘ve stopped at the intersection of Highway 183 and Loop 360 in Austin. I see a man standing on the meridian, next to a folding chair, holding up a sign. It reads, “My 4 year old son is dying of cancer. Please help me pay for his medical treatment.”

Austin is the lovely and sedate capital city of the state of Texas. Its population is about 800,000. It has rolling hills covered in trees, clear blue skies, and clean crisp air. It has roads without potholes. It does not have trash lying on the streets. It’s the home of cyclist Lance Armstrong and his Livestrong Foundation to support cancer survivors. It’s the home of large IT companies and the organic retail success story, Whole Foods. Mornings see an exercise- conscious populace walking, running, and biking along the riverside walkways. Evenings see the affluent fill the upscale restaurants. In this land of plenty, even the down and out who need to beg for aid at intersections can afford a sign to state their case and a chair to adjourn to. The man looks tall, able-bodied, and hefty, weighing in at not less than 200 pounds.

And yet I’m disturbed. My own son died of cancer when he was almost four. My heart goes out to the man. It’s a terrible ordeal to go through even when you have no money issues, but I can imagine the added burden when you must worry about how to pay for the care—lifesaving or palliative.

I wonder if there is something I can do or at least anyone I can contact to assist this man. But then I wonder if this is just a scheme to separate people from their money. Does he really expect a stranger in a car to stop and give him $50,000?

Friends tell me that American hospitals cannot refuse anyone who comes into Emergency. I wonder if this man knows that and why he doesn’t take his child to one of Austin’s many good hospitals—like the Children’s Hospital of Austin or the Dell Children’s Medical Center. Surely there must be social workers to handle such situations. I wonder also about Obama’s recently approved healthcare reforms and if they could help this man and his child. It sounds promising. In general, 50 million Americans who are currently without insurance will be assured coverage. In particular, two points may be particularly helpful: insurance companies cannot refuse coverage to children under the age of 19 with pre-existing conditions; and perhaps more relevant, an expanded government Medicaid program will strive to provide more healthcare for those living below the poverty line—but this will also depend on the individual states.

At An Indian Intersection
I’ve stopped at the intersection of Africa Avenue and Ring Road in New Delhi. A distraught woman holding a small baby taps on my car window. She points to the baby and says it’s terribly ill and she must get it to the hospital immediately. She’s pleading for money.

New Delhi is a frenetic teeming mega-city and capital of India. Its population is roughly 14 million. It has hazy skies and discernible air pollution. It has potholes with roads. It has wealthy industrialists, private schools, large parks, and monuments from the Mughal Empire. It sees thousands of opulent weddings each year that cost hundreds of thousands of dollars. It’s the home of the rich and famous of Indian politics. Pranab Mukherjee, the ex-finance minister has just recently moved from his plush government-supplied home in central Delhi to occupy the 355-room presidential palace, the Rashtrapati Bhavan. But Delhi is also the home of the poor. In this land of contrasts, more than half of Delhi’s populace lives in slums without basics like electricity and water.

And yet I’m disturbed. A woman with a sick child is asking for help; what mother would not empathize? Pressed to my car window, her face is harsh, dusty, and tear-streaked. Her hair is unkempt. Her sari is torn and dirty. Her bony arms hold out the child for me to see it better. The baby’s head is lolling back and it looks only semi-conscious.

My first thought is to put both mother and child into my car and drive them to the nearest clinic. My family doctor is not far away in Vasant Vihar and the All India Institute of Medical Sciences (AIIMS)—one of India’s biggest medical facilities—is less than two kilometers away. But then warning bells ring. Friends tell me these can be con artists working to separate you from your money. I also remember reading a news item about a nanny drugging her charge and then hiring out the baby during the day to beggars so they could get more alms. So instead, I give her Rs.50 and tell her to immediately take the autorickshaw standing just at the curb to the hospital. She takes my money silently and moves on to the next car to ask for more.

While India does a thriving business in healthcare tourism for those who can afford it, the government’s healthcare programs for its poor have largely failed. Even so, there must be several charitable government-run and NGO-run clinics in Delhi who help the poor when they are sick— but I wonder whether this woman would know of such resources. Last year the Supreme Court ordered Delhi’s plush private hospitals to treat the poor free of charge but since then there have been reports that only some institutes have complied and others are making it difficult for the poor to access treatment.

The Global Intersection
Both the United States and India are experiencing economic slowdowns, although the U.S. would be happy with the Indian growth rate of 5.3% and India with the American GDP per capita of more than $48,000. The United States unemployment rate is over 8%. The government of India claims its nation’s unemployment rate is 6.6%, but the figure is rendered meaningless by the vast and murky unorganized sector. The United States has a social security system that one political party thinks provides too much and the other, not enough. India’s mishmash of social security schemes (often corruptly administered) is unilaterally thought to be insufficient. In both countries, there are people who walk the tightrope without a net, and fall.

The Light Turns Green
Stopped at the intersections, I look out from the comfort and cocoon of my car. I don’t fully understand their situation. Several thoughts run through my head. One is “There but for the grace of God—or more likely, sheer dumb luck—go I.” Another is to question if their story is true. A third and most important thought is what I should be doing to help.

The light turns green for me. Feeling uneasy, I drive slowly through the intersection and away.

Ranjani Iyer Mohanty is a writer and academic editor, based in New Delhi. Her articles have appeared in several publications including The New York Times, The Wall Street Journal, and The Atlantic.
Source: India Currents.