My Turn: Keeping the Faith 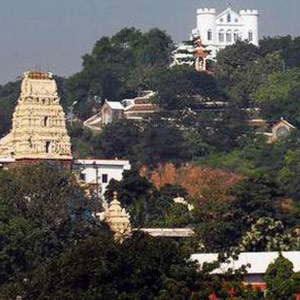 (Left) Near each other: a temple, a church, and, just outside the picture, a mosque.

The holidays are a perfect time to contemplate why some folks misinterpret my open-minded visitations to their place of worship—and my celebration of festivals from various religious backgrounds—as an invitation to impose their faith on me.

I never considered my religion to be an issue.

I was born into a Hindu family, a Brahmin family at that. My paternal grandmother was born into the Bene Israel Jewish faith. I studied at an English-medium Catholic convent school. We spoke two regional Indian languages at home, apart from Hindi and English. That was normal. My childhood friends and neighbors practiced other religions; that was normal, too. And we celebrated with our friends of other faiths on any and all holidays.

Throughout my father’s career in law enforcement, he was often stationed in religiously charged communities. We grew up to see other religions as allies. We never blinked at the thought of visiting a religious space that was not ‘our own kind,’ so to speak. Every place of worship was just that, a place of worship. That was normal.

My religious innocence went on display in my new country one morning in November 1995 as I stood in a church in Middle America, on Thanksgiving Day. Perhaps because I was an international student living on campus alone, my host family invited me to go to church with them to attend morning mass. Informed by my convent education in India, where religion was never imposed upon us, I happily agreed.

Dressed in a light satin floral shirt with tan jeans and brown combat boots, I stood among the congregation who was dressed in formal ‘church’ clothes. Again, thanks to my convent education, I boldly recited The Lord’s Prayer, chimed in with the Hail Marys and even managed to sing a few hymns even if they were a little off-key.

For some reason, my hosts decided to introduce me to the congregation—at the end of all services, before everyone departed for their family gatherings. I remember introducing myself to the church, and expressing my gratitude as a good guest would to being included. But I was not prepared for what came next.

I can’t recall what denomination of the church they were—Catholic or Protestant or Baptist. Innocuously, perhaps politely, perhaps to make small talk, the pastor came over. After exchanging a few initial pleasantries, I understood he was not interested in knowing more about me, or my beliefs, except if I was going to join their church. He was rather insistent that I should join them, telling me about their wonderful mission trips and the wonderful work that church members did. My host family was also very active in the ministry and they added how I could contribute to their efforts as well if I joined the church. A part of me felt like my religious identity was being ignored simply because I had willingly walked into that space, into their church. I left that church wondering why it would be okay for anyone to push their religion on me simply because I was a willing guest at their place of worship.

Ironically, as I write this, I also keep in mind the story of my own grandmother, who, from being a Bene Israel Jew, changed her religion and became a Hindu before she married my grandfather in the late 1920s, in India. I suspect she experienced inner turmoil on that account; but it was her choice and my grandfather’s decision. I knew she and her children suffered religious discrimination because of her choices. But those were not made under duress, or political or community pressure.

What did she feel when she gave up her religion? What did she feel when people did not accept her change? What did her children feel when people saw them as half-bloods, as impure? I can only imagine how hurt and isolated they must have felt. My late father shared many stories of their emotional struggles with their identity, and how those shaped his decision—and that of his siblings—to give their children a good education that would keep our minds and hearts open to all religions and all faiths. My brother attended a boys’ school —Don Bosco High School—and I, a girls’ convent nearby, Auxilium Convent. Both were run by strict Catholic priests and nuns who were keen that we didn’t lose focus on education. We both learned to recite Hail Marys and The Lord’s Prayer without a hitch or hiccup. Our parents enrolled us for a half hour morning class of Moral Sciences before we started regular school instruction, along with other non-Catholic students, while the Catholic students attended Religion class during that time. No one forced us to do anything, except that if we wanted to opt out of prayers, we were not to disrupt the others during theirs. That was normal. I even was curious enough to ‘take communion’ one year because I wanted to see what the bread tasted like.

As a child, I remember it was normal to visit our Catholic neighbors over Christmas and partake in their festivities. Our friends’ mother, D’Souza Aunty would invite the neighborhood children to their house and set out platters of treats for a Christmas Party. They also had a projector and screen and about 30 kids would cram into their living room some evening to watch a family film. It was a happy time, and I am still looking for good recipes for kulkul—a fried dough-based treat that D’Souza aunty made only during Christmas.

As a young graduate student at the University of Illinois, I served as a teaching assistant for a freshman level class in Religious Studies under the respected Prof. R. Pandharipande. We openly compared the principles of Hinduism to others. Each time we discussed the topic in the classroom, it emerged quite simply that every religion revolves around the same principles: love, kindness, acceptance, understanding the contrast between good and evil, and conquering fears. Every religious book differs, the sacred foods, languages of prayer, and of course, the prayer halls are different. They may even have different concepts of the origin of faith and respective representations of the ‘messengers’: Jesus, Allah, Brahman (not Brahmin), Buddha, or others. But every single religious text offers the same path to ‘deliverance’—love and mutual respect for others. Each religion speaks of developing an understanding of the other, of empathy, of never forcefully demanding adherence or reverence, never limiting access, never demanding servitude, never creating a space of disrespect. So why does this understanding never leave the walls of the classrooms?

Ten years at that convent taught me the most precious lesson—a mutual respect for another’s religious freedoms. Religion was never enforced, discussed, or even a topic of contention. Religion was a belief, and we each had our own.

When I contrast my youth with narratives from other communities in India, I see that there was a degree of privilege that came from being a middle-class Hindu family. Perhaps due to my sheltered life, and the discrimination my father had experienced, we never saw it as a topic of discussion within the family. Not until I came to America. And until in this past decade or so, each time I return to India. I have learned that being a peace-loving, secular Hindu in India is no longer the norm that I grew up with, as it is being fast pushed out by elements and attitudes that expect a blind allegiance to the so called superiority of Hinduism.

As parents in America, my husband and I attempt to answer the innocent questions of our child with grace and logic. In December, we decorate a Christmas tree and exchange gifts, not for any religious reasons but to honor it. A few years ago, I found an old candelabra belonging to my grandmother with her maiden name engraved on it, so I light a candle in it on the first day of Hanukkah, and I’ve been getting better at making Pineapple Malpuas, a Bene Israel dish, for the occasion.

In the last twenty-odd years since that morning at the church in Middle America, I have wondered how one religion is perceived by another. I cook special foods for each holiday we take time to observe—for no other reason but to honor it, not because I am unhappy with my own or because I am looking for reasons to change my beliefs.

So, it should be no surprise that I cringe each time the doorbell rings on a weekend just before the holidays, fearing that someone is at my door telling me how I can ‘find myself,’ if only I were to join their place of worship. Just like the realtors who come to my door asking if I want to sell my house while I am clearly still living there, I wonder why people see their own affiliations of language, religion, community, or celebration supreme and become keen to discount or disparage others. I feel hurt when someone thinks it is odd for a person of Indian origin to honor secular American observances like Halloween or Thanksgiving, or put up a Christmas tree or light a Hanukkah candle when they may not have a direct or visible connection to it.

Cultural and religious biases that appear in our neighborhoods, around our homes, and in our country are self-serving mechanisms meant to divide us. Othering only creates hollow communities. Religious zealotry takes the once large boulder of humanity and deliberately weakens its strength by demoting our personal beliefs into smaller pebbles of distinctions and divisions.

Many religious leaders preach that spirituality resides in ourselves; each one of us interprets and practices it as per our own free will. Then why should we contest the homes of those faiths, restrict access to them, or need to relinquish our own faiths in order to celebrate the joys of others? Why not just celebrate the joy of whatever holiday we wish to observe and cheer on for the one religion that we all share—humanity?

Nandita Godbole is an Atlanta-based author and food writer. Her biographical fiction, Ten Thousand Tongues: Secrets of a Layered Kitchen was featured on City Lights–WABE (Atlanta’s NPR), Forbes, and BBC-Future, and in an earlier avatar, on NBC and NBC-Asian America.