COVID-19  In-depth info for Indians in Atlanta/Georgia. Click here
Home > Magazine > Features > My Turn: What Aru Shah Means to Me

My Turn: What Aru Shah Means to Me 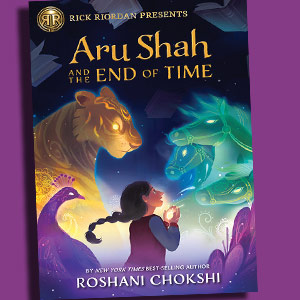 Georgia-based Roshani Chokshi’s Aru Shah and the End of Time (Rick Riordan Presents), the first book in her Pandava series, is about a seventh-grade girl who lives in the Museum of Ancient Indian Art and Culture, Atlanta—and who, because of a questionable decision, is thrust into the world of Hindu mythology. ANISHA YAGNIK shares her excitement of discovering and reading a story in which an Indian-American is the protagonist.

Roshani Chokshi, who is half-Gujarati and half-Filipina, has said that she wrote a lot of herself into Aru, and into the supporting character, Mini, who shares her mixed heritage. I am so happy that she wrote this novel. In fact, the past few months have been really exciting for me, because I’ve been discovering ways that Indian-American characters can be naturally fused into fictional formats that American readers are used to. As the main characters, even! There are Indians in America who are receptive to the same kinds of storylines as their American counterparts, such as a commentary about the torture chamber known as middle school, or a magical adventure full of fantastical beings. More stories should be written with Indian-Americans at their center.

Maybe this is prompting a big ‘duh’ from some readers, but honestly, it is not so obvious a conclusion. Stories about minorities are often understood to be less commercially successful. I had to comb through the list of popular middle-grade books on Goodreads in order to pick out the few that featured diverse characters. Looking at the front covers, I noticed a troubling trend: many seemed to be trying to hide the ethnicity of the character by drawing them as silhouettes or by placing them less prominently in comparison to any white characters on the cover. I was delighted to see that The Girl Who Drank the Moon by Kelly Barnhill, Ghosts by Raina Telgemeier, and One Crazy Summer by Rita Williams-Garcia all prominently featured their characters in full color. Aru Shah and the End of Time joins these books in celebrating the beauty of diverse characters on the front cover, and not attempting to hide anything from readers. This proud representation is part of the reason I feel so much optimism that this book is making its way to young readers’ shelves. Kids who look different should not have be hidden.

Any hesitation to write a story centered on a minority character comes partly from the worry that a majority of potential readers won’t find it relatable. And there’s the rub. What aspects of a character make them relatable? Does it really have to be their race or ethnic background? Thus far, the fantasy genre has pulled from faerie folklore, European fairy tales and mythologies, and the Bible. Given the complaints over these repetitive tropes in the fantasy genre, new cultures should come as a breath of fresh air. Characters from different cultures introduce story elements and themes that readers may not have encountered before. The hesitation regarding relatability still holds, because different cultural backgrounds are still perceived to be a large differing factor between otherwise similar people.

The world of fiction has been reluctant to accept that a character like Aru deserves to be featured in the center of their own storyline and that her story should get the same attention as similar stories about nonmarginalized characters. That’s why I almost cried after reading Aru Shah and the End of Time. Roshani Chokshi placed an Indian seventh-grade girl, attending a mostly white school in Atlanta, at the center of her own fantastical, demon-battling storyline, and made her just as deserving of the spotlight as Percy Jackson.

Aru Shah’s life circumstances are basically my own—Indian, Hindu, Gujarati, American, and a (former) inmate of a mostly white middle school in the Atlanta area—and she is put on the same playing field as the likes of Percy Jackson. That’s a triumph that makes my heart swell. I think of the long-term effects of a story like this, and that’s what prompts the tears. Kids in my generation marveled at the Percy Jackson series. We learned and laughed about Greek mythology through these stories and discovered a new way to interact with ancient mythologies outside of a history classroom. It was an excellent first step toward educating the young generations about the breadth of ancient mythologies that had such an impact on art, culture, and literature still in existence today. I can confidently say that I know so much more about Greek, Roman, Egyptian, and Norse mythology through Rick Riordan’s stories than I would ever have learned and retained in a history classroom.

Rather than downplaying Percy Jackson, I’m just trying to uplift the Pandava series. Greek mythologies live in the history books and almost nowhere else. It is not a large part of any people’s religious beliefs. Therefore, learning about Greek mythology is an excellent history lesson, but not necessarily an important anthropological lesson. There’s where learning about Hindu mythology differs—the Hindu religion is still practiced, and learning about it is a way to understand the culture of a large population of people (despite the fact that Hindu culture has many, many variations). American pop culture representations of Hindu Indians are often problematic, depicting stereotypes (see any Indian nerd character), caricatures (see Apu from The Simpsons), or exotic falsehoods (see Indiana Jones and the Temple of Doom—or preferably, don’t see it!). Learning about a people’s culture is a key way for an individual to see the world through their eyes, which is an important step toward seeing and treating them as fellow humans—an important step toward inclusivity.

This is precisely the experience Aru Shah and the End of Time provides to readers. In her writing, Chokshi reflects on the difficulty of fitting in at a school where your classmates only notice how you differ and not how you belong. At the same time, she is writing about a girl who discovers a new world, new powers, and a new legacy—the same kind of exciting storyline that attracted readers to the Percy Jackson books. If readers embrace this book and the forthcoming Rick Riordan Presents books, I can’t wait to see how young people’s understanding of their minority classmates will evolve. I sincerely hope the “that’s so weird” mentality toward foreign cultures will begin to dissolve. I hope this is something real, and not wishful thinking.

Anisha Yagnik just graduated from the University of Georgia with a major in Biology and a minor in Spanish. In 2013, the first draft of her novella—which she later rewrote and self-published as A Tale of Two Thieves—won a Silver Medal at the Scholastic Awards for Art and Writing. She lives in Alpharetta, GA.