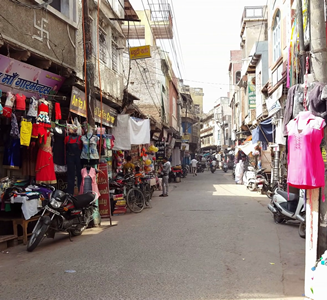 Imagine a narrow street with hundreds of shops lined up on both sides, for about 4 to 5 blocks. That’s my fairly accurate recollection of the street leading to the main entrance of the Srirangam temple. Everything from clothes, medicines, arts, crafts, food, gold, shoes, and books are sold here. During evenings and festive days, the space is packed with pilgrims, tourists, and shoppers, a sensual amalgam of sounds, lights, and colors. Call me “biased,” but to me, hands down, Srirangam’s main street is more exciting than Times Square in New York!

If you’ve always wanted to see and experience the full glory of small-town bazaars, you should take a trip to this temple town that’s home to one of India’s most revered shrines, always bustling with crowds and temple festivities.

One of my favorite activities during summer holidays in the 90’s was to stroll the main street during the middle of the day. Afternoons were the only time the street was quiet, as the temple would be closed. What inspired these strolls was not the colorful shops or food or the sights. It was the men and women who behaved like they were part of one large beehive, portraying the common traits of their fascinating tribe—the shopkeepers!

Okaay, you have to walk with me here. Have you ever wondered what shopkeepers do when there are no customers? I don’t know how it is these days since everyone’s got a smartphone, but back in those days, it was so different.

I was always drawn to one particular phenomenon. Shop after shop, most of the owners would just be sitting quietly and looking at the street. What was even more interesting was the stoic expression on their faces. Other than the occasional hellos, gentle head nods, and hand waves to acquaintances, they would just be sitting and looking onto the street, their faces empty of expression. It didn’t seem like they were paying attention to the music playing on the radio in the background, nor were they chit-chatting with their neighbors, who were all doing exactly the same thing. Even the dogs on the street lying down in the shop’s shade would lift their heads or walk around once in a while. But never the shopkeepers.

No restlessness, no impatience, no anxiety for lack of customers. They would just stare as if they had nothing to do. I wondered if they were part of a secret mindfulness society. As a teenager, that particular state of doing nothing bothered me. Were they daydreaming? Visualizing a busy evening? Were they complying with their union’s secret pact that specified certain hours of just sitting and staring? What was going through their mind? How could they just sit without doing anything for hours?

The Heisenberg Uncertainty Principle states that you can never simultaneously know the exact position and the exact speed of an object. What if the shopkeepers were behaving true to the uncertainty principle? Could they have moved really fast to their “gazing positions” as soon as they spotted me?

Evenings and weekends were quite the contrary. The whole street would be bustling with activity and the shopkeepers were quite enchanting. They smiled more and engaged more with the passersby. The difference in the shopkeepers’ attitude and responsiveness was night and day, I might add! In spite of observing them for years, I never figured it out.…Then I left Srirangam in the 90’s and the shopkeepers became a faded memory.

Fast forward to today. Recently, I took a break to recover from an illness, during which time I indulged in a busy schedule of binge-watching and binge-reading. After a while, I caught myself doing a whole bunch of itsy bitsy things, but mostly sitting idle for extended periods of time, doing pretty much nothing.

One particular day during this aimless phase, I stumbled upon a unique word. So excited was I with this “discovery” that I couldn’t wait to share it with someone else. Just then, my teenage son came home from school. The moment he entered the house, I blurted, like a schoolkid, “I came across a fascinating word—‘lollygagging’!” With a confused look, he asked, “D’you mean ‘lollypopping’?”

I said, “No silly! It is lollygagging—it means to spend time aimlessly. It is an extended state of idleness and procrastination.” Feeling quite proud that I had additional information, I continued, “You know what? I also found that research after research says that this state of idleness helps boost productivity. There are even TED talks about this!” I paused, expecting a suitably awed reaction.

He thought for a minute, and said, “Wow, Mom! After all, you are a lollygagger!” and walked off.

Speechless, deflated and disappointed by the response, I mumbled to myself, “Ugghh! Teenagers are ruthless.” Deciding to put a positive spin on his comment, I patted myself on the back that I did find something meaningful after a day of lollygagging!

That very instant, there came a flash of insight, my very own “Aha!” moment. “Lollygagging. That’s what they were doing. My favorite tribe of people were all lollygagging!”

The shopkeepers sat gazing at the streets, seemingly aimless. But it wasn’t without purpose. As research indicates, they were probably priming and getting ready for an evening of extreme activity. Consciously done, it is meditation. In their own way, they used that time and opportunity to unwind, daydream, decompress, and get ready to be productive, for yet another busy day.

Fascinating, or what?! So, do you lollygag?

Maya Harita blogs nostalgically about life from a distant past in India that was very simple and funny and yet, in many ways, profound.