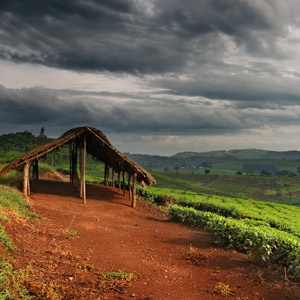 There is just something about the fragrance of soil after rain! Down memory lane in search of harmony.

Oh, those nightly musicals! They were such a part of my life during my young teen years. If you are thinking The Lion King or the Phantom of the Opera, you are so off-base. Mine was even better. Better only because I was a privileged audience of one for the initial years, until later when I was joined by my siblings.

This daily nocturnal concert started when I was about 14 years old, when our family moved to the quaint town of Srirangam in South India. In our new house here, my siblings and I, our parents, and our grandfather, all slept in one rather large room. This room was special, because it had a high-speed fan, which meant better breeze during the blazing hot summers. So, every night we went to bed—on a lineup of area rugs, mats, mattresses, blankets, and pillows on the floor.

Okay, drum roll, please! As the curtain rose, my dad would kick off the concert with his performance— also known as…snoring! Not to be left out, Mom and Grandpa would soon follow, converting the “bedroom” to a concert hall full of stereophonic bass and treble.

Dad’s snoring was deep throated, and his sounds were like the growling of a hungry lion cub. It was a long “Grrrrrrrr…[pause]… Grrrrrr.” Each “Grrrrrrrr” was really long; it would pass through your ears and reach the deep trenches of your gut! Mom’s snoring sounds were like short quick whiffs of air, using her mouth: “Pooff…pooff [pause] pooff…pooff,” and on it would go again. It was like a puppy’s bark—except, it wasn’t that cute! Grandpa usually played a double role. His snoring was mostly a very low pitched, meek “hmnnn” which, when you listened very carefully, could be interpreted as “Hmm…noooooo…. [pause]… Hmm…noooooo.”

In the initial weeks of our sleeping arrangement in Srirangam, I literally ran off to bed first to try to sleep before the musical started. Most nights, the plan failed. Just about the time I’d be ready to slip into sleep, Dad would kick it off with his ‘hungry lion cub’–– “Grrrrrr”–– soon followed faithfully by Mom’s not-so-cute ‘puppy bark’ “Pooff” and Grandpa’s “Hmmmm…nooooo.”

While, together, they ensured there was plenty of vibrato effect, sadly, there never was any harmony between their snores. I tried really hard to find a rhythm and failed miserably.

After a few hours of tossing and turning, when I would finally doze off…WHAM! A big slapping sound would jerk me awake. Heebedee jeebies!!!

Did I mention, Grandpa’s second role was swatting mosquitoes? He would literally slap his own hands, legs, and body to swat a mosquito with his bare hands! Believe me, for a long time I thought that it wasn’t mosquitos that tried to bite gramps. It was probably a scorned huge spider or scorpion that wanted serious revenge. Maybe that’s why he slapped it so hard and loud?

Oh! Did I mention I named this musical The Three Mosquiteers?

So, to keep myself entertained during this orchestra, I would have fantasy conversations with the gods of snoring, thanking them for their generous blessings toward my family. I made deals where I would offer my siblings as a sacrifice in return for the gods to take away my parents’ snoring. Some nights, I would visualize winning the Nobel Prize for creating a remote device which could control the snoring noise levels!

One particular night, with the musical in full swing, I got up to go to the bathroom and accidentally stepped on my sister’s feet and she squealed in pain. In that instant, suddenly, the musical stopped, and there was this eerie and absolute silence. I stood in fear expecting to get an earful from one of my parents. For a few minutes, I stood still, faced with the question: should I still go to bathroom or use this silence to go back to sleep? Well, even before the answer came to my mind, the orchestra resumed gloriously.

Anyway, I mustered up the courage to tiptoe out of the room. Oh, boy, was I glad for that! It was about 4 am and I opened one of the windows.

There it was—an early morning in this beautiful small town. I had never experienced this hour of dawn in wakefulness. It had just rained. In the semidark surroundings, the air was pure. There was a clean, crisp breeze with a gentle mist. The post-rain smell of earth was heavenly. There was fragrance of the morning blooms; our cows were waking up, moving around and stretching; there was a warm waft of burning wood from a nearby tea shop at the street corner. All my senses were awake!

Other than the feeling that it was a special experience, I didn’t realize until a decade later that this would become my most nostalgic, happiest memory. I can never forget those fleeting minutes. That rainy morning has remained my go-to happy moment. To this day, the scent of earth and rain stirs up that old memory. Years later, I came to know that “petrichor” is the word that refers to the smell of soil after rains.

Isn’t nature’s musical always on? All we have to do is take time out to tune into it.

Petrichor is my happy word now. It reminds me to take the time to tune into nature and let the moment capture me.

So, what’s your happy word?

Disclaimer: My parents and siblings are lovely people and I love them with all my heart.

Maya Harita blogs about a nostalgic life from a distant past in India that was very simple and funny and yet, in many ways, profound.