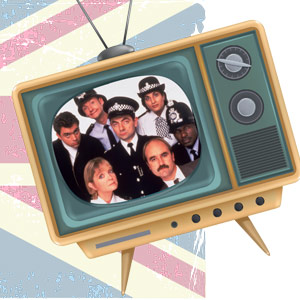 An ode to cherished family rituals from the author’s childhood in India. Binge watching British sitcoms was one of the highlights—so much so that these shows ended up being a source of comfort during her lonely times as a graduate student in a Midwestern college in 1995.

Visiting my aunt’s house for a potluck lunch would fill me with giddy excitement as it typically meant that she had a new acquisition to share from one of her husband’s latest international trips as a flight attendant. She would not tell us what the new acquisition was until we got to her apartment. Her apartment had a designated parking space, was accessible via an elevator, and was nestled in freshly planned and tree-lined streets in a posh suburb of Bombay. Her apartment displayed a multitude of curios from across the world and was the diametric opposite of ours—a tiny government issue quarter, surrounded by curious neighbors, and in a century-old building that was too old to have an elevator or designated parking spaces.

The anticipation would begin just as the Corelle plates were cleared, delicately washed, and immediately put away back into the ‘good china’ cabinet. Counts would be taken for the number of paans to be purchased from the corner paan shop. My brother and I would shuffle through her music collection for newer English music on vinyl or cassettes. But we were just biding time.

Later in the afternoon, after we had found out about the trip and the acquisition, the aroma of bubbling tea leaves would signal that it was time to gather around in the living room. A rationed selection of digestive biscuits, warm fries that were once frozen, and little sachets of Heinz ketchup appeared on a tray on her small coffee table alongside Corelle cups bearing the essential ingredient of all such huddles, the afternoon cha.

The sliding sound of a large black cassette into the VCR triggered everyone into attention—the family had officially settled for one more afternoon of elbow-jabbing laughter and tears, pausing only if someone was about to wet themselves, hungry, or both.

These times at my aunt’s house were the first experiences of bingeing on British television comedy, courtesy of the flight-attendant uncle who brought videocassettes of these shows from abroad.


I haven’t been able to pinpoint what it was, but there was something innately liberating about watching British humor with the likes of Mind Your Language, Mr. Bean, and The Thin Blue Line. In some subversive way, we may have been snickering at a culture that had long oppressed our country. As much as an escape from the ordinary that it may have been, we saw humans struggling with the same issues, norms, and expectations as we did. It was most acutely and markedly pretentious. The satire required us to pay attention to subtle gestures, the eye rolls, or the shrug. We understood the tone, ridiculousness, and theatrics of behavior, and saw how it mimicked some of our own.

My mother, who spoke very little English, found it funny, too. On those afternoons, we saw our extremely regimented and strict parents laughing and enjoying the curiously nuanced and accented comedy of eccentric, ordinary human behavior. This eventually grew on us as a family-approved activity, a ritual.

With cable options proliferating in India in the early 1990s, British and American television programming entered our living rooms alongside local programming. Barring a few like The Lucy Show, most elders found these foreign shows indulgently opulent, sometimes scandalous, big hair productions, padded in all the wrong places, and particularly short on their costume budgets. Robin Leach’s Lifestyles of the Rich and Famous was a prime example of a show we loved to watch, but everyone loved to hate as well.

We dabbled in both American and British television but weekends meant Tele Match, Yes Minister, Whose Line Is It Anyway, To the Manor Born, particularly staying up for Are You Being Served, and the much anticipated annual event—watching an abbreviated version of the Grammy Awards well past everybody’s bedtime.

My mother would permit herself and me to enjoy Martha Stewart, Madeleine Kamman, Jacques Pépin, Baking with Julia, The Frugal Gourmet, and Martin Yan over the weekend—shows that would eventually shape my career as a food writer, much later in life.

Sunday morning cartoons included Tom & Jerry, Mickey Mouse, and Fraggle Rock, and Sunday afternoons were never complete without the dashing Jeremy Brett as the legendary Sherlock Holmes. But of course, any cricket match took precedence over local programming, especially if it was between India and either England, Pakistan, Sri Lanka, or Australia.

I did not realize what role television played in my life until I found myself in a tiny shared apartment on a midwestern college campus in 1995 as a graduate student, several thousand miles away from any whiff of the concept of home or family.

In the first few months, I convinced myself that my familiarity with foreign television would make America, its people, and its offerings feel a pinch less foreign than it did to others. I had never really lived alone until then, and the urge to virtually engage with familiar people on television seem-ed appealing.

After scouring many move-out sales I purchased a small, 18” television for a princely sum of $80 from a Korean student. Two flights of stairs later, and after finding a suitable plug point behind my bedroom dresser, I once more stared into the familiar snow of dancing static on the tiny screen. In its abstract patterns, I felt some relief. I extended the antenna into various positions and tried without luck. My roommate reminded me—perhaps we needed cable? I had just spent nearly a quarter of my monthly earnings on a box, but could not afford to make it work. I called my co-car owner friend, and we fidgeted with the television some more. He extended the antenna to find the frame of the window screen. And behold, a picture flickered in place, the colors intact, the familiar American slang boomed through my tiny bedroom. I now could watch television.

It took me an entire semester to understand the alphabet soup of network television and their programing, to find shows I liked. Of the American shows, I found something my friends and I watched back home, Friends—and it made me miss them. Shows like Frasier carried forth the comedy of pretentious but flawed people, while Bob Ross’s repeated expressions of ‘happy little trees’ and ‘happy little clouds’ became cheerful and welcome intrusions on my afternoons off from schoolwork.

I spent many weekend afternoons with the calm voices of Martha, Julia, Jacques, and the ever-comedic Yan navigating non-Indian dishes, now that I knew where to find ingredients. I eventually stumbled into old favorites that buzzed through the screen with cheery nonchalance. I settled in when Are You Being Served and Jeremy Brett came on. I looked forward to Dianna Rigg’s calming voice each Thursday night, a welcome change to the clamoring chatter elsewhere as she introduced televised versions of my favorite authors’ stories on Mystery!


I traipsed through Europe with Rick Steves while shuffling around in my pajamas, but the brooding Derek Jacobi as Brother Cadfael in a British mystery series made me cuddle up under the sheets a little deeper. The vivaciously funny Dawn French and her love of chocolate in The Vicar of Dibley made me forget my own single life, but the enduring love and companionship between Jean and Lionel in As Time Goes By made me wish for an old-fashioned romance. The quirky Mrs. Bucket and her family in Keeping Up Appearances reminded me of several people I knew back home, and I found Mr. Bean again—in Blackadder.

One morning I even found Noddy—the character from my very first picture book that I had received as a prize in second grade. That morning, the twenty-eight-year-old me met her eight-year-old self all over again, with a warmth that returns to my heart each time I watch an old British rerun even today.

I had never thought so deeply about this until I chatted with my friend Amy about our favorite comedies. Our conversation lingered with me for days after, and I found myself sifting through memories of times when I first made independent choices. The indescribable reassurance in finding familiar names and faces had served as the magical balm to my homesick, single, graduate student life. They represented threads, the outline of carefree youth when once I sat around family elders, enjoying companionship and care, escaping from the ordinary that surrounded us, naively taking those moments for granted.

Indulging in those reruns in solitude reminded me that ordinary was important. Those afternoons had solemnized the beginnings of my wishful thinking to experience new places, foods, and experiences. They had embraced strangers, and took me to picturesque touristy places, studio kitchens, and studio homes, behind the safety of an analog box just so I could temporarily forget that I was alone. They had ignored my frustration and struggles with American grammar, my dislike of uninspired humor, and instead fed my appetite for subtle delights with easy and familiar companionship that suited my introvert personality.

Soothing, familiar, and funny voices would calm my otherwise ‘othered’ being, comforting me that it was OK to use British terminologies once in a while. They would lull me to sleep, whispering that it was OK to be different, as long as I was funny.

Nandita Godbole is an Atlanta based author of many cookbooks and a food-novel. She also writes with pizazz on Indian-American life.