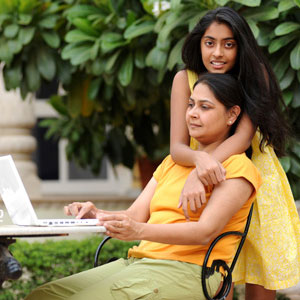 Ideally, New Jersey dietician, Shyama Girija  would like to have ten children.”They are tiny little versions of you, beautiful and innocent. And I really don’t see the problem with a large, happy Indian family,” she says. It’s easy to detect the longing in her voice; she longs for it to be a bit easier. Suzanne Gatto laments that her job demands some deft navigation in an especially competitive professional atmosphere like Washington DC.  After recently getting feelers from friends that her 15 month old son would need a sibling to keep him company so that he does not become an attention addict, Gatto, a marketing director at a prominent non-profit, is already reviewing her future as a mom and a career woman. “I want to have another child before I turn 35. Considering the fact that I am a workaholic and have to already make that extra effort to give my son quality time, the decision to have another child will be a tough one,” she says.

Girija  has siblings of her own and she has a close knit Indian family in Ohio but is of the opinion that every family is different. Raising a child requires the proverbial village. Grandparents are not always available and studies have shown that men, employed or otherwise, are less likely to help out with chores at home. A recent study at the Institute for Social Research at the University of Michigan shows that working mothers are two-and-a-half times as likely as working fathers to interrupt their sleep to take care of their children. And women are not only more likely to get up at night to care for her children, their sleep interruptions last longer—an average of 44 minutes for women, compared to about 30 minutes for men.”I am constantly fried and now my husband wants a second child, maybe even a third and that’s because he loved growing up in a busy household with four siblings. But I still have to remind him that dirty clothes go in the laundry room, not the bed. He’s not a very quick picker-upper.,”says Sonali Loomba,  an accountant and mom to a super kinetic preschooler.

Mothers, both career moms and moms who are taking a break from work to raise their children have always had an eternal battle: work or family? project deadlines or play dates? While most moms acknowledge that it is possible to have both with a good schedule and aggressive time management, some are additionally  burdened with the prospect of expanding the family. The one child myth does exist and there is not too much support for the mom who wants it all. “Who doesn’t love children? But look at Canada and countries in Europe where there are so many benefits like paid maternity leave for working moms. It’s very stressful to think of having a child after the first one; it’s costly and time consuming.” says mom of one, Gauri Bathija, a physiotherapist who has had multiple eyes rolled at her at the park where she takes her 18 month old for her play dates. “When is the second one coming along,” they ask. Looking to go back to her practice soon, Bathija is reminded on a weekly basis that daughter Kaia might not learn to share and may either become an imperious imp or wallow in loneliness forever. The solution? Another baby, fast.

In her book, “Parenting an Only Child”, social psychologist Susan Newman, says more people than we like to believe, seem to have a problem with the idea of a single child. According to her, people revel in the belief that children with no siblings are spoilt, aggressive, bossy, lonely or maladjusted. This perception is rampant today despite extensive research on the fact that only children are no different from their peers who grow up in a household with siblings. Mothers afford a number of reasons why this is such a pressure situation.

Even if they are grudgingly stepping in the direction to making more babies, a genuine concern for mommies is an unfriendly economy. “My current workplace is pretty flexible and if I were to stick around here when I have my second child, I don’t foresee a problem. But, in this economy, employment conditions are ever changing and there is no guarantee that I would enjoy the same benefits if I were to work someplace else in the future. So deciding to have a second child is a bit of a battle,”says Gatto.

It has also become more expensive to bring up a child. Recent statistics from the US department of Agriculture show that parents were spending about 17 per cent of total expenditure on their child’s education in 2009 as opposed to 2% in 1960. The report estimates that raising one child costs about $224,000 and that is excluding college expenses. “I I think about the practicality of having a second child. The job market is not very good and one has to struggle to stay employed. Two kids would definitely complicate the situation but then I do like to watch Kaia’s friends play with their siblings. My main concern is: “who can she fall back on in bad times?”.  Maybe a  brother or sister would  help her out with a home loan or offer to look after children when she wants time with her husband,”  daydreams Bathija while shopping for work clothes that will fit her post-baby body.

Then there is also the issue of professional advancement and charting out an upwardly mobile career. Pamela Johnson Abbott a mom of three concedes that things would have been different with a single child.”I would have had more time to concentrate on schooling and a career . It can be hectic for a mom like me whose children are very involved in a range of extra curricular activities. That leaves hardly any time for career and self,” says the former Senior Associate of manufacturing firm, Owens Corning in West Virginia. “If I have a second child, I might have to opt for a part-time position in the future. It’s not an ideal situation but it is an adjustment that has to be made,” says Girija. Working hard to pay off hefty student loans and scraping some extra dough to take home is a process that not only takes a toll on careers but relationships as well, especially marriages.” I get nagged about my baby weight constantly. So I tell my husband, take your pick. You want another baby or do you want a supermodel? He wants another baby, so I have decided to lose the sum total of all my baby weight after the second baby,” laughs Loomba.  For now she is  determined to make it work. “Motherhood infuses a person with extra motivation and at the end of the day makes all the hard work worth its while. But after the second one, I’m done!,” says the doting mom.