Opinion: Jim Crow on My Mind 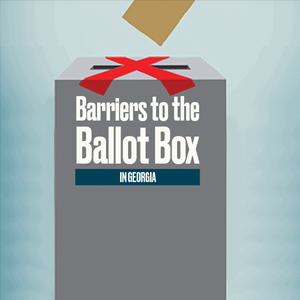 Far from being a relic, the Jim Crow era of racial segregation seems to be alive and well in the Georgia State Capitol, notes MURTAZA KHWAJA.

“Jim Crow! Jim Crow!” These words from a bygone era were directed at a group of Black female legislators by one of their white male colleagues during Georgia’s ongoing legislative session. Jim Crow, state and local laws that enforced racial segregation in the post-Reconstruction American South, may have once been a remnant of the Democratic Party but now appears synonymous with the modern-day Republican Party.

In the wake of Trump’s unprecedented refusal to concede the 2020 presidential election to Biden, Republicans in state legislatures across the country introduced over two hundred fifty bills to restrict voting access. In direct response to the historic voter turnout of the 2020 election, these Republican-sponsored bills would disenfranchise millions of Black and minority voters throughout America. Here in Georgia, there have been over fifty voter suppression bills introduced in this legislative session alone. Most notable among these are House Bill 531 and Senate Bill 241.

Hastily introduced amid the slew of voter suppression bills at the Georgia state Capitol, HB 531 is a 66 page omnibus voting bill that does not include any input from Democratic lawmakers or voting rights advocates. Among a host of other draconian restrictions, HB 531 limits absentee voting by 1) requiring absentee voters to submit their driver’s license number, state ID number or a copy of their photo ID with their ballot; 2) shortening the window in which voters can request absentee ballots; 3) preventing election officials from mailing absentee ballots until four weeks before the election; 4) restricting drop box access; and 5) barring election officials from mailing unsolicited absentee-ballot applications to voters.

SB 241, its own 25-page omnibus voter bill, would also severely restrict absentee voting by 1) ending “no excuse absentee-ballots,” 2) implementing new ID requirements to vote by mail, and 3) requiring some ballots to have a witness signature.

HB 531 further restricts in-person early voting by limiting weekend voting. In the 2020 general election, over 250,000 Georgians voted early during a weekend. With this bill, these voters would face new restrictions under HB 531 in a manner disproportionately impacting Asian American and Black voters. About 13 percent of Asian American Pacific Islander (AAPI) voters and 12 percent of Black voters who cast their ballots early did so during weekend voting.

HB 531 would completely eliminate Sunday voting, which was used by 71,764 Georgia voters, of whom 37 percent were Black voters. In total, 85 percent of AAPI votes cast were cast in ways that HB 531 aims to restrict, while Black voters made up 36 percent of the voters on the days that HB 531 aims to eliminate. All of these are departures from existing practice and aim to restrict access to the ballot for many who would not otherwise be able to vote, particularly those in Black and AAPI communities. Many of our community members’ schedules do not permit them the flexibility of voting in person. Both HB 531 and SB 241 aim to perpetuate the false narrative of a stolen election. Rather than choosing to honor the results of what federal agencies have called the “most secure election in American history,” these insidious pieces of legislation undermine the foundation of our electoral institution—the ballot.

The HB 531 will now be heard and voted on in the Senate while SB 241 receives a vote in the House. The damage to the integrity of American elections has been done. Voter confidence has intentionally been eroded.

However, voter rights advocates and civil rights organizations alike have banded together to ensure the fight for access to the ballot continues. After over two million Georgians were purged from voting lists between 2013 and 2017 (at a time when 22 percent of all eligible voters were not registered to vote), Black, Muslim and immigrant-led organizations launched state-wide campaigns to overcome voter suppression efforts. Four years later, their civic engagement programs led to all but two percent of all eligible voters being registered in the 2020 Presidential election. This, at a time where Georgia was nationally known as “ground zero” for voter suppression.

Organizations like New Georgia Project, Asian Americans Advancing Justice, the Georgia Muslim Voter Project, Council on American-Islamic Relations (CAIR) Georgia and others have now crafted the blueprint to combat voter suppression, ready to be put to use in the event these Jim Crow voting laws pass. They may come to suppress our vote, “but still, like air, [we’ll] rise.”

Murtaza Khwaja is Legal & Policy Director, Council on American-Islamic Relations (CAIR), Georgia. To comment on this article, write to letters@khabar.com.