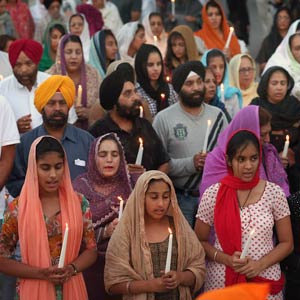 The closing weeks of 2012 did settle the debate about the Mayan calendar and the end of the world. Thankfully we are all still here. But the year also ended on a very troubling note in both South Asia and within its diaspora in the United States.

We have held vigils for Jyoti Singh who was gang-raped and murdered in Delhi, and for the female workers in Karachi shot dead for trying to help in the battle against polio.

But this article is centered on events closer to home, right here in our United States, and how our reactions frame the way we handle ethnic stereotypes.

The shooting last August at the Sikh Temple in Oak Creek, Wisconsin, which killed six people of the Sikh faith was troubling enough, but 2012 closed on another grim note when on December 27, a native of India, Sunando Sen, was pushed to his death onto the rail tracks of the New York subway by one Erika Menendez, who later explained her actions with these words: “I pushed a Muslim off the train tracks because I hate Hindus and Muslims ever since 2001 when they took down the twin towers. I’ve been beating them up.”

Mental illness might be the likely cause of homicide here, but this tragedy could not have materialized without the imagery associated with 9/11/2001 itself.

One can argue that only time will heal all wounds. Our nation was certainly attacked by a vicious and murderous group of people, close to 20 in number, whose active support group may run into a few thousand worldwide. That they quite incorrectly claimed to represent over a billion people of the Islamic faith is a topic for another day, but the images that we have seen of the WTC towers falling in New York have become etched in our minds.

Like the rest of America, we South Asians were horrified at this terrorist attack. Soon after, a tall individual with brown skin and wearing something resembling a turban on his head was identified as the man behind the worst attack that the United States had faced since Pearl Harbor. Understandably, Americans of all colors, races, ethnicities, and origins were mad as hell. We wanted an enemy. And South Asians, especially Sikhs, fit the description of the “brown-skinned and turbaned” villain.

It has now been over a decade since 9/11, and Osama bin Laden is dead. In America, an era usually ends after a movie is made on it. The movie Zero Dark Thirty about the hunt, capture, and killing of Osama bin Laden is out on the silver screen now. Once again what was “overlooked” in this film was the cooperation provided by some of our people in finally locating him.

Today, why are we South Asians in America still paying the price for something that we had no part in?

At a vigil in California, after the deadly attack on the Gurudwara in Wisconsin, attorney and activist Amar Shergill from the Sikh American Political Action Committee, while addressing the participants, said that when his relatives who lived in Wisconsin asked someone in the neighborhood what was going on because they were prevented by police from entering their Gurudwara, the neighbor said that “there was a shooting at the mosque. Imagine. That is a neighbor from the community who thinks that he/she lives next to a mosque!”

Nobody is asking our government in Washington that it should let its guard down when dealing with terrorism. But more than eleven years have passed since 9/11 and desis are still being targeted. Our outreach work has not been as effective as we would like it to be.

Not everyone can sift through the news over time and know that the person taking an order at a fast food joint, at a gas station cash register, the doctor or engineer at work, or just one of our senior citizens walking down the street with a brown complexion is not the enemy. Many South Asians in this country are rich and immensely successful. But that has still not translated into a change of perception and we are still seen as foreigners who can easily become targets of anyone who hates us because of the way we look.

South Asians can no longer remain mere spectators. Voyeurism is a luxury we can no longer afford. We have to remain collectively alert to details which we may have considered too small to attract our attention earlier. We also need more desis in law enforcement and the media. Till the number goes up in a significant way we must establish close links with all branches of the security apparatus in this country.

Indians, Pakistanis, Bangladeshis, and all South Asians are equally liable to be victims of hate crimes due to our brown faces. Whatever may happen politically “back home” between our countries of origin, it should not divide us here in the United States. We have to remain more united than ever before.

Our karma in post 9/11 America is tied to our skin color!

Ras Siddiqui is a South Asian writer and journalist based in Sacramento, California.  Source: India Currents.