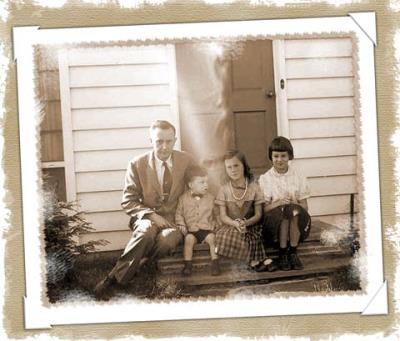 “Going to church was an important part of American culture in the 1950s,” says the author, who is seen in this 1957 photo as a toddler with his sisters and father.

My wife is out of town, my dad is visiting, I’m cooking dinner, and my daughter, Molly, has just screamed, “My diaper needs to be changed.”

I look at my dad and see a man who survived the Great Depression, fought in World War II, carved out a life in the suburbs upon his return, and with Mom’s assistance produced four kids. But cook a dinner or change a diaper?

I shove the pans on the back burners, go to Molly’s bedroom, remove the dirty diaper, wipe, clean and powder, and then quickly wrap her bottom in a clean diaper. I return to the kitchen, wash my hands, and resume cooking.

“Billy, do you think it’s time that I learn how to change a diaper?” my 75-year-old father asks. “I’ve never changed a diaper before. Your mother always changed the diapers.”

“Dad, are you kidding me? Have you already forgotten what happened when you tried your first laundry? You used bleach instead of detergent!”

We laugh. But a few minutes later, after noting that he sees me doing all these things that he never did, he asks, “Was I a good dad?”

Two decades later, the election year of 2012 is well underway and the political analysts are saying that the election is all about “values.” When I hear a campaigning President Obama tell an appreciative audience that Mitt Romney is “out of touch with today’s America,” that Romney “has all the easy answers, just like one of those know-it-all television dads from the 1950s,” the audience erupts in laughter, hoots their derision, and at first I laugh too, for the line was sharp and funny.

But when I think the matter through, it doesn’t seem nearly as funny. Sure, if some wish to laugh at the values of the American family during my dad’s era, fair enough, for there is enough to poke at, as we will shortly see, but given the current state of the American family, a place where 40 percent of babies are born to unwed mothers, nearly 50 percent of all marriages end in divorce, and our kids are falling behind in the world’s educational rankings, should we really be laughing?

How, and why, have we moved so quickly from the cultural family norms of the 1950s to today? Since our nation was founded on Christian principles, we will begin our journey in the pages of the Christian Bible.

It is in these pages that we find verses that, when taken literally, support the notion that women are subordinate to men, sex outside of marriage is wrong, and homosexuality is an abomination. In the 1950s, such words were accepted as “gospel” by all major Christian denominations and families. It is even suggested that as Jesus Christ, a male, is head of the Christian church, similarly, the husband is to emulate Christ as head of his Christian household.

These Christian principles worked their way into American culture as seen in those iconic black and white television shows of the 1950s, such as “Leave it to Beaver,” the “Donna Reed Show,” and “Father Knows Best.” All of these shows featured a know-it-all breadwinning dad, an adoring stay-at-home wife, and mischievous but good-hearted kids. Thanks to television reruns, these shows influenced how generations of Americans would come to define the idyllic and traditional American family.

In reality, there was nothing idyllic or traditional about the 1950s American family!

My 94-year-old mom is still angry, for example, that society expected her to quit the job she held during World War II, live in the suburbs, and raise four children. Millions of other women are angry or frustrated as well, some for reasons they cannot identify. Betty Friedan famously calls this rampant female unhappiness, “The problem with no name.”

Nor could our lonely moms turn to their parents or even grandparents for conversation and perspective, for they lived elsewhere, due in part to the Social Security Act of 1935, the first federal program in our nation’s history that transferred what had been a family responsibility—financial care of aging parents—to the government. As a result, millions of families—like mine—were free to travel and seek new opportunities knowing that the government would take financial care of our aging relatives.

I never thought too much about how government programs can both solve and create problems, until the winter of 2007. Then, in the fading afternoon light of a Mumbai apartment, an Indian “niece” painted a tilak on my forehead. “You came as our guest and you are leaving as our family,” Raina said, smiling, as her family and cousins watched. Tears came to my eyes because of the sensitivity of the event, the sheer relief of having traveled through India so safely, and because at that moment I realized that I did not know even a single member of my extended American family.

The simmering anger of the 1950s explodes into the social revolutions of the 1960s, as women, along with blacks and gays, march in the streets and argue in the courtrooms. Young people march against the senseless Vietnam War. The invention and availability of “the pill” means that sex, once the nearly exclusive domain of married couples, becomes a recreational event for single people. Many Baby Boomers—my generation—reject their parent’s values, “do their own thing,” “don’t trust anyone over 30.”

My sisters and I are far too grounded in our parents' values to join any of the protest movements. Nor would any of us join the conservative, grass-roots political organizations such as Focus on the Family or the Moral Majority that form in the following decade. These groups, and others, wish to repeal or prevent government laws and programs from intruding on what they see as private family matters and values, such as a woman’s right to an abortion, welfare benefits for unwed mothers, or sex education in the classroom.

Think the gap between the two movements isn’t wide?

In 1974, a period of time when the “women’s libbers” were still “burning their bras” and risking their, well, necks, one of the best-selling nonfiction books was the “The Total Woman” by Marabel Morgan. She writes that the “total woman” should cater to her man’s special quirks, whether it's in salads, sex or sports, that it's only when a woman surrenders her life to her husband, reveres and worships him and is willing to serve him, that she becomes really beautiful to him. She goes on to suggest that a wife greet her husband at the front door dressed in transparent Saran Wrap, with nothing but her naked self underneath.

In terms of social justice and equality, the gains since the 1950s have been astonishing. Impressively, men and women have both adapted to these changing circumstances. Women, for example, feel far less pressure to be that “super woman,” a high-achieving employee, a perfect cook, and a “traditional” mother, than they did in the 1980s, the decade I began my work career. We men—some more willingly than others—have learned to support our hard-working wives by cooking, cleaning, and changing dirty diapers, all things that our 1950s counterparts never had to do.

But as surely as there have been gains in social justice and equality, there have been losses, nowhere more significant, at least to my male prejudiced mind, in the phenomenon of the absentee father.

“You were a great dad,” I tell my father in response to his question. “Values were just different back in the 1950s and early 1960s. Even though you didn’t change our diapers, or plop down on the floor to play our board games, my sisters and I always knew that you cared.”

My father, the most important person in my life, a man born before women had the right to vote, died in 2007, just before my first trip to India. He never got to hear my stories of Akbar and Aurangzeb, nor did he live long enough to see his granddaughter, Molly, grow into a terrific young woman. She now works in Boulder, Colorado, for a nonprofit company that focuses on promoting equal rights for women, blacks, and gays. My dad, who taught his son and daughters to see the colors of the world, who never pretended to have all the answers like one of the black-and-white TV dads of the 1950s, would have been so very proud.