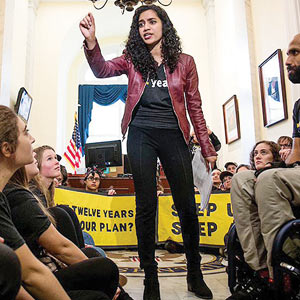 Meet Varshini Prakash, a founding member of the Sunrise Movement, whose radical ways to influence complacent governments on climate change are gaining traction around the world. They used guerilla tactics to shake up House Majority Leader Nancy Pelosi’s office and are aggressively promoting the Green New Deal. Will their youthful, restless vibe and ability to organize mass campaigns make a dent in the struggle for climate solutions?

Varshini Prakash, 26, “cut her teeth” at organizing as a student at UMass Amherst. There was a campaign underway calling for fossil fuel divestment at the university, and she got involved. One of the Sunrise Movement’s eight young founders, she fell in love with organizing the way a painter falls in love with light, discovering depths and possibilities she never before imagined.

“In a cultural and personal way, I began to feel the climate crisis a few years ago when there was this tremendous series of floods that absolutely devastated Chennai—my father’s home town—and Pondicherry. I was deeply affected, seeing the terrible levels of inundation that sank streets familiar to me from visits to Chennai—especially the images of mothers and children having to walk miles to find safety. Everything they were saying would not come about for another ten, twenty, or thirty years was occurring right before our eyes in South India and in the United States as well.”

Founded in 2017, Sunrise came into being, says Prakash, on the consciousness of Gandhi’s nonviolence campaign against British rule, and Dr. King’s civil rights movement against racism in America. Unlike many of her contemporaries, the Boston-born activist sees herself as the daughter of histories.

She is amazed to find herself a maker of history. But she is not unfamiliar with the process, and with the role of young people in that process (she is, however, a virtual geriatric compared with climate crisis leaders like Greta Thunberg, 15, and Alexandria Villaseñor, 13.)

“My dad would tell me stories about his great-uncle who protested against the British and got scolded by his parents. Those are my roots.”

Her own parents are sympathetic. Her mother—a quality assurance analyst for a health care company—plays an active role in a campaign to save India’s rivers from polluting toxins. Prakash’s father is an engineer.

“They are, of course, concerned that I am not making enough money,” she says, laughing, “that this may not be a solid career path for my life in the future. But I think they are proud of how I’ve charted a path focusing on improving people’s lives, of living with a deep sense of purpose.”

She doesn’t say how they reacted to Sunrise’s bold guerrilla action—taking over House Majority Leader Nancy Pelosi’s office in January and demanding a Green New Deal for the U.S. The takeover was a warning that Sunrise played no favorites. Politicians of both parties would be held accountable for their positions on climate.

“After the Democrats took back the House, Pelosi said she would revive the committee on climate change, but she would not promise anything beyond that. We felt like this was grossly inadequate.”

She laughs now at the fallout from that one action, aided in part by the participation of socialist media magnet Rep. Alexandria Ocasio-Cortez.

“We were successful in ways we could not have even anticipated. In just days after the takeover, we saw 5,000 articles published on the Green New Deal. Within months, we went from having 35 local chapters to 180 chapters. Our online presence increased exponentially. And thousands of young people responded by staging sit-ins, or calling or tweeting politicians, or writing letters to the editors of their local newspapers.”

The Green New Deal, whose name is derived from President Roosevelt’s massive social welfare program following the Great Depression, is not the brainchild of Rep. Ocasio-Cortez or the Sunrise Movement, despite how the media fuses them almost exclusively together.

“The neoliberal journalist Thomas Friedman has been writing about it,” Prakash says. “Bernie Sanders ran on a Green New Deal platform. The Green Party has been discussing a Green New Deal for years now. But for my generation, what really motivates us is the 2018 ICC report telling us we have about twelve years to change every aspect of our fossil fuel-based economy to an economy that runs on renewable energy. The Green New Deal is essentially a 10-year mass mobilization program that would achieve this, while creating millions of good, well-paying jobs that would lift people out of poverty and expand the economy.”

In recent months, Sunrise activists, including preteens, have confronted Senators Dianne Feinstein (Democrat) and Mitch McConnell (Republican), who have branded the Green New Deal as too extreme both politically and economically (critics set the tab as high as $93 trillion). If they failed at conversion, they succeeded in the Feinstein confrontation at existential clarification. Urging the senator to support the Green New Deal, a little girl emphasized, “Some scientists have said we have 12 years to turn this around.” Feinstein, 85, told her quite firmly that things are not going to be “turned around” in such a short time. To which an older girl responded, “You are looking at the faces of people who will be living with the consequences.” It was those faces, those consequences, that Feinstein brusquely bypassed when she insisted, “I’ve been doing this for 30 years. I know what I am doing. I was elected by almost a million-vote plurality.”

“All we were doing,” said Prakash, “was holding up a mirror to the inadequacy of action and negligence our politicians have shown. That encounter just showed what that negligence looks like. We find ourselves asking, ‘Where are the adults in the room?’”

The dichotomy between the urgency of young people, climate future’s stakeholders, and the complacency of older people, may alienate radicals like Prakash in the long run. But for now, she is driven by determination, by her vision of radical transformation. Her activism seems to have bypassed the blind rage that was the undoing of many anti-war activists during the sixties and seventies. Perhaps seeing oneself and one’s movement as custodians of the future has an emotionally moderating effect on how one navigates the present.

Prakash avidly engages family members and acquaintances in dialogue on climate. While she may find herself at odds with their views, she is encouraged that Indian immigrants still have stored in their consciousness the floods, the droughts, the farmer suicides back home.

“The problems of flooding, water shortages, and rising temperatures are on the minds of many Americans these days, not only Indian-Americans, or those from other countries seriously impacted by climate change. Our task is to connect climate change with issues of concern to people, to get them to open their eyes and make the connections for themselves.”

Turning to 2020 and the upcoming congressional and presidential races, Prakash, while not backing any particular candidate, vows that Sunrise intends to badger every candidate about their stance on climate change. “Every politician running in 2020 and beyond who wants the votes of young people has to be serious about tackling the issue of climate, has to make it a top priority from day one.”

On the surface, former Washington governor and now presidential candidate Jay Inslee would come closest to being her ideal candidate. Inslee underscores his calls for support with the following message: We are the first generation to feel the sting of climate change, and we are the last generation that can do something about it. Prakash lauds his “mission.”

She is also upbeat about the evolution of the climate discussion in America. “We are already seeing more debate on the issue of climate in this election cycle than in all the campaigning in 2016.”