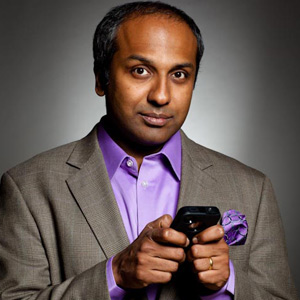 Tech guru and journalism professor Sree Sreenivasan was in charge of all things digital at New York’s famed Metropolitan Museum of Art. When he lost his high-profile position in a wave of layoffs, it didn’t take him long to bounce back. New York Mayor Bill de Blasio has appointed him as chief digital officer of the nation’s largest and wealthiest city.

“With Sree Sreenivasan’s wealth of experience, I am confident that he will work to promote transparency, access, and progressive values with our digital tools, helping spread access across the five boroughs,” said Mayor de Blasio, a Democrat who took office in 2014.

The appointment follows Sreenivasan’s public departure from the Met as the result of cost-cutting measures—the museum is facing at least a $9 million deficit, and high-level leaders like Sreenivasan don’t come cheap. Sreenivasan was paid $328,900 per year, according to The Wall Street Journal.

“It’s a real honor for me to serve as the CDO of the world’s greatest city,” Sreenivasan told Khabar. “What happens in New York has an impact on the world as people pay attention to what happens here. We’ll be setting standards that will help other cities.”

Sreenivasan said he had his work cut out for him: expanding wifi, attracting diverse tech talent to the city, and building strong tech infrastructure to support the needs of 8.4 million New Yorkers.

“There are so many opportunities to collaborate closely across various sectors and help bring more startups here,” said Sreenivasan.

In his new role, Sreenivasan will direct NYC Digital to launch digital products that encourage civic engagement and increase government transparency. Sreenivasan himself is transparent. While many high-profile executives might have licked their wounds and worked their networks behind the scenes, Sreenivasan went in the opposite direction when he was laid off from his job.

He took to Facebook to talk about his job loss and asked for suggestions on how he could spend his time. He received over 1,000 suggestions from the online community. The unusual gambit led to a great deal of positive press and ultimately landed him a job.

“I was telling people I need help,” said Sreenivasan. “I got this job because the folks at City Hall saw my notice about being available.”

Sreenivasan served for three years as the first chief digital officer at the Metropolitan Museum of Art, where he led a 70-person team to increase the venerated museum’s digital presence. He invited influential Instagrammers inside the museum during closing hours to photograph the #emptyMet. He also brought the Met’s collection online via a revamped website and launched the Met’s flagship smartphone app.

In 2004, Newsweek magazine named Sreenivasan one of the “20 most influential South Asians” in the U.S. The very model of a cosmopolitan Indian-American, with the intellectual pedigree (educated in New York and New Delhi) for a globalized world, Sreenivasan has spearheaded fund-raising efforts for South Asian causes, ranging from tsunami and earthquake relief to education.

Before joining the Met, Sreenivasan spent two decades as a member of the faculty of the Columbia Journalism School and a year as Columbia University’s first chief digital officer. Also a former dean of students at the Columbia Journalism School, Sreenivasan earned a reputation for encouraging students and others to experiment with new social media platforms.

He surfs four browser windows at a time and thrives on “information overload.” He once confessed, “Some of my friends and colleagues accuse me of adding to the information clutter in their lives. They think I send out too many e-mail messages (100 a day, typically), and receive too many (250 a day, at least). They even invented a name for it: Sreemail. They say I use technology too much. I use digital stamps, I send electronic cash, and I bid on eBay using my cell phone. I will read Hamlet on my Palm as I watch a movie version of the play.”

A father of twins, Sreenivasan is one half of a Manhattan power couple—he is married to innovation consultant Roopa Unnikrishnan, a Rhodes Scholar and Arjuna Award-winner for rifle shooting who was Board Chair of Sakhi for South Asian Women, a major local nonprofit.

Sreenivasan, who was born in Japan to Indian parents, lived in Bhutan, the former Soviet Union, New York City, Myanmar, India, and Fiji. He got a Bachelor’s degree in history from St. Stephen’s College in Delhi and a Master’s in journalism from Columbia University, New York.

“I am serious about my New York roots but I am also serious about my Indian roots. I am proud of being an Indian, a South Asian, a Malayalee, a Nair, and a former Delhiite,” he noted. Sreenivasan co-founded the South Asian Journalists Association (SAJA) in 1994 to bring more Indians and minorities into U.S. and Canadian media.

“When I was a kid my parents said we were going to the NBA—I presumed it was a National Basketball Association game, but it turned out to be the Nair Benevolent Association,” he added. “I was so upset, but to show you how things have changed—I am now a lifetime member. I expect I will be taking my kids to pujas and meetings, but also to basketball games. You wear these multiple hats. You put them on and take them off. You are everything and at different points you are specific things. There is room in a person’s life for different identities.”