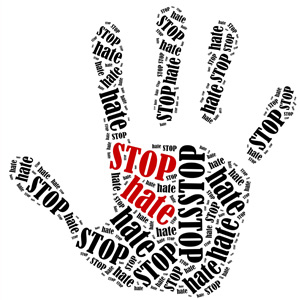 In a book titled American Hate: Survivors Speak Out, activist and attorney Arjun Singh Sethi maps the growing number of hate crimes in the U.S. targeted at immigrant communities. Calling it a civil rights issue that Americans must face up to, Sethi urges us to protest and take action to stop these abuses.

Before his reading, before the overflow crowd began arriving at the NYC bookstore, McNally Jackson, I had a chance to observe Arjun Singh Sethi. The activist Sikh lawyer, Georgetown law professor, and writer, was in New York to launch his book, American Hate (The New Press), about hate crimes in America. The book tells the stories of hate crime survivors, or in the case of Khalid Jabara, Lebanese-American, a young man who did not survive.

In his black turban, with his impeccably neat beard, the
3​6-year-old sat autographing his book for two older women with gracious attention, carefully going over the inscriptions with them. He struck one as a man quietly comfortable in his purposeful skin, not the veteran of a nasty subterranean war. In his hands, the blood red book he signed seemed misplaced. Outwardly at least, he didn’t seem touched by what touches him. 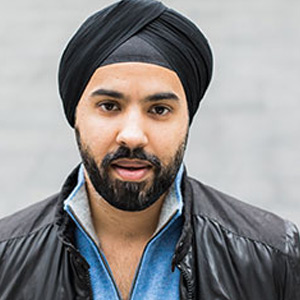 “In the context of writing this book,” he told me when I phoned him at his home in D.C., “I was nearly driven off the road in Tulsa, Oklahoma, stared down by a cashier and a customer in Kalispell, Montana, and intentionally misdirected on the campus of American University in Washington, D.C. Ever since 9/11, Sikh-Americans, because of their beards and the turbans they wear to cover their long hair, have been viewed with suspicion. We have been vulnerable to bullying, profiling, and hate violence. We have been attacked as Muslims, yet we stand with Muslims against attacks. We stand in solidarity with all groups that are victimized by hate crimes. It’s a tradition I am proud to continue.”

But if Sikhs (and hijab-wearing Muslim women) are the South Asians most victimized by hate crimes, Sethi cautions that even under-the-radar South Asians would be unwise to think they could hide from danger in quiet, affluent suburbs. “We have seen time and again that hate crimes can affect anyone.”

People in at-risk communities, and not only dark-skinned communities, living in restive pockets of xenophobia can witness the shattering of their wellbeing in a single, unexpected moment. Hate crimes in California alone jumped more than 17 percent in 2017, according to the state’s Department of Justice, and CNN reported that during the first six months of Trump’s presidency, 63 mosques were vandalized in the U.S. Tanya Gersh, a Jewish real estate agent and wedding planner from Whitefish, Montana, was targeted by Nazi leader and part time Whitefish resident, Richard Spencer. The Daily Stormer, his online website, ran pictures of Gersh and Gersh’s family, their phone numbers, email addresses, plus an invitation to readers to visit her home “and tell her in person what you think of her actions.” (In the aftermath of Spencer’s Nazi salute in the nation’s capital, Gersh had recommended to the tenants in a building owned by Spencer’s mother that they put statements of love in their windows in response.)

“The cyber-bullying of Tanya Gersh,” Sethi asserted, “resulted in 800 menacing phone calls and emails from November 2016 to May 2017. There was even the threat of a proposed march led by white supremacists to her doorstep. Tanya Gersh was subsequently diagnosed as suffering from PTSD, and has fought back by filing a lawsuit against Andrew England, publisher of the Daily Stormer, in Montana Federal Court, charging invasion of privacy, the infliction of intentional emotional distress, harassment, and intimidation.”

Sethi’s insight that a hate crime is not necessarily a crime involving physical violence is illuminating. It is a crime that often involves harrowing symbolic violence. When African-American Taylor Dumpson was elected student government president at American University last April, what was seen at sites around campus? Displays of bananas hanging from nooses made of black nylon ropes. Dumpson, too, was cyber-stalked by the Daily Stormer, and later diagnosed with PTSD.

Taylor Dumpson, like Tanya Gersh and other survivors of hate crimes, did not back down. She reminded students of the words of Frederick Douglass: “If there is no struggle, there is no progress.”

The following day hundreds of AU students staged a protest walkout in support of Dumpson. 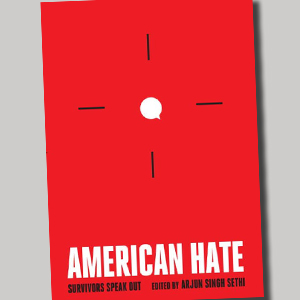 Sethi’s choice was to focus not on one or two of the worst affected communities, but on all of the communities in America that find themselves reeling from the spike in hate crimes since the 2016 election of President Trump. By including blacks, Native Americans, gays, and Cambodians in his book, he universalizes the problem, challenging the complacency of the many who might otherwise tend to view hate crimes as the unwanted, undeserved property of the few, namely Muslims and Sikhs.

In our conversation, Sethi stressed, as he usually does, that hate crimes in America did not begin with Trump, but with the country’s first settlers. “The United States was built on a hate crime: the decimation and destruction of native communities.”

But he quickly doubled back to Trump. “What makes this President particularly dangerous is that he has used his presidency to incite and embolden hate across this country. Through his rhetoric, he has targeted communities of color, immigrants, refugees, black folks, Muslims and Jews. Rhetoric matters. The day Trump said he would ban Muslims from entering the United States, a pig’s head was found outside a mosque in Philadelphia. The day he actually signed the first Muslim ban, a mosque was burned to the ground in Victoria, Texas. There have been thousands of hate crime cases in America where perpetrators either mention Trump or his policies by name.”

Traveling the country to interview survivors for his book was often an emotionally jarring experience. “So many people have lost so much. Hearing their stories, I was sometimes overcome with anger, grief, and sadness. The death of Khalid Jabara, for instance, was totally preventable.” Vernon Majors, a white supremacist, moved into the house next door to the family in Tulsa, Oklahoma. He called them “dirty Arabs.” One day, he struck down Haifa Jabara, Khalid’s mother, with his car. He was at first not allowed to post bond. But when a new prosecutor was appointed, who Sethi claims was not familiar with the history of the case, he decided to allow Majors to be released on bond. The man returned home, and months later, shot Khalid Jabara to death. “It is an American tragedy every American should know about.”

He also feels every American should know about the reaction of the Jabara family to their loss. Rami Jabara, Khalid’s brother, is working in Texas with other victims of violent crimes to get authorities to legally protect previously targeted individuals from recidivism. Victoria Jabara, Khalid’s sister, dialogues with youngsters in Oklahoma about developing positive racial justice attitudes. Victoria told the author of an email she received after the murder from a cousin of the killer, informing her that Majors had been abandoned by his parents, grew up homeless, and never had a community. “You know, Arjun, that’s the problem. He never had a community.”

“In that moment, she was thinking about how to move on, how to make sure that everyone in this country has a community. That shook me to my core.”

What survivors aim for, Sethi emphasizes, is “restorative justice.” Like Rami and Victoria Jabara, many haul their fears and vulnerabilities into schools, community centers, work places, to dialogue with ordinary Americans about religious and ethnic prejudice, and the common humanity and nationality that binds and can nurture, if given a chance. On a strictly practical level, members of communities afflicted by hate violence have opted for self-defense classes. And technology (social media, apps, etc.) has also come in handy.

Sethi tells me about Syrian refugee Asmaa Albukaie, who was asked by a judge in Boise, Idaho, for a statement during the trial of the man who punched her son when he answered, “Yes,” to the question, “Are you Muslim?” Albukaie said the defendant would learn nothing about love and respect, or why they had to flee Syria as war refugees (her husband was murdered), or about Islam, from a jail cell. He needs to be educated, to have his humanity restored.

In his presentations, Sethi’s method is to reel off the facts as methodically as a lawyer. He never fails to link hate crimes with human consequences, but mainly he wants people to know what the facts are. His bottom line fact is this: “A hate crime is a crime that would not have occurred absent the victim’s identity. Hate crimes send a message that vulnerable communities do not belong in the United States of America.”

Though most states, he acknowledges, have hate crime laws, law enforcement organizations and personnel tend not to adequately investigate hate crimes, or know very little about affected communities. Fighting hate crimes and streamlining the criminal and judicial systems must be made national priorities.

“Only twelve states require police to learn how to identify hate crimes during academy training, and few departments require such training after police officers leave the academy. As for technology companies, they should take a stronger stand against hate. There should be checks in place, but if somebody is removed from one of those platforms, there should be [a] mechanism to appeal that decision. Practices of shadow banning are not healthy for our democracy.”

Equally unhealthy, we both agreed, was indifference. When I asked Sethi what he would like to see ordinary people do to push back against hate crimes, he began by speaking about what ordinary people were already doing. With the help of the interfaith community in Texas, the mosque in Victoria has been rebuilt, and is getting ready to be reopened. In Tulsa, a talk at Bnei Emunah preschool by Khalid Jabara’s niece, Layla, led to the decision by the Bnei Emunah Synagogue community to construct the Khalid Jabara Memorial Library at the preschool. Its opening in July 2017 was attended by Tulsa Mayor G.T. Bynum as well as Victoria Jabara.

“Ordinary Americans,” said Sethi, “must raise their voices against hate crimes, against Trump, too, when he spouts hate. White supremacy and racism must be confronted directly. Bullying is not a rite of passage. We all have the right to be free from harassment at school and at work. It is a civil rights issue that people should take up. They can also support organizations on the ground that serve impacted communities. Or, if they wish, they can join a Sanctuary group in their back yard. I always recommend people take care of their own back yards first.”

Sethi has brought together all of America’s hate-fractured back yards in his book. I thanked him for that, for the courage of his dark pilgrimage.

Robert Hirschfield is a New York-based freelance writer whose work has appeared in Outlook India, Sojourners, The Jerusalem Report, and Matador, among other publications.