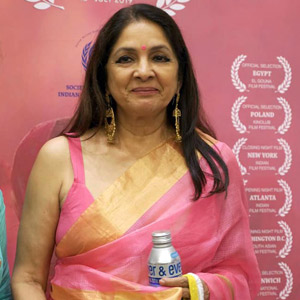 (Left) Neena Gupta at the UN, for the screening of her award-winning film, The Last Color.

Feisty at 60, and flying high after her hit film, Badhaai Ho!, actor Neena Gupta was in New York recently for the screening of her film The Last Color at the United Nations. Elegant as ever in an orange and shocking pink sari, the consummate film and TV actor curled up on a sofa in a Manhattan hotel for a frank and down-to-earth chat with Khabar about her life and rejuvenated career.

Neena Gupta has just turned 60—and she’s having the time of her life. As she says, “It’s a great time to be a woman in the film industry!”

While Bollywood has come of age in terms of more experimental and socially relevant storytelling, filmmakers are still chary of writing interesting roles for older women actors. The middle-aged Khans can be cast opposite 20-somethings—and audiences will happily accept them—but heroines, once they are past their youth, get typecast in motherly roles or, worse, simply fade into oblivion. Not so for Neena Gupta, who is a happy exception, enjoying an extended, delightful springtime of challenging roles. 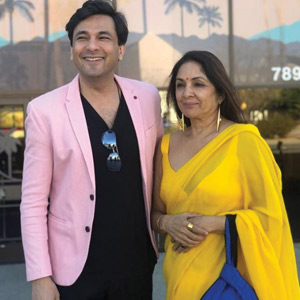 (Right) With celebrity chef Vikas Khanna, who wrote and directed The Last Color.

A consummate television actor in drama series like Saans and the winner of two National Film Awards, Neena Gupta’s career, nevertheless, seemed to be on the wane around the mid-2000s. In a remarkable comeback, she now has her hands full of the choicest assignments. She was just honored at the United Nations with a screening of Vikas Khanna’s The Last Color, a strong film about women’s empowerment for which she won Best Actress award at the Indian International Film Festival of Boston. 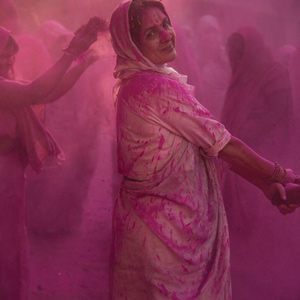 (Left) A still from The Last Color.

In The Last Color, Neena plays Noor, an ageing widow living a drab, colorless existence in Varanasi, abandoned by family and society. Yet she leaves herself open to little acts of defiance and courage, overcoming barriers of caste and class to take on the nurturing of Chhoti, a struggling street child and rope-walker. Having so little herself, Noor is still able to inculcate poetry, a sense of justice, and self-worth in the child. Chhoti grows up to become an advocate who fights to bring about reforms for the rehabilitation of widows. 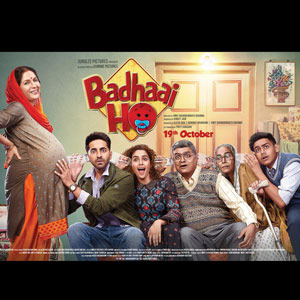 In her most recent Bollywood outing, Badhaai Ho, Neena Gupta played Priyamvada Kaushik—a much-married, much-harried housewife and the mother of grown-up sons; she shocks herself, her family, and society by getting pregnant once again, late in life. The film was successful beyond expectations at the box office, and Neena won the Filmfare Critics Award for Best Actress.

In 2017, Neena acted in a short comedy titled Khujli, about a middle-aged couple trying to get intimate in the face of daunting odds like cramped living space and the presence of an ageing, wheelchair-bound mother-in-law. This short comedy (now on YouTube) in which she starred with Jackie Shroff, went on to win a Jio Filmfare Award. As always, Neena slipped into her role, completely natural and watchable, and coolly blew away a few stereotypes.

In many ways, Neena herself embodies these off-beat women characters, having dealt with life’s vagaries with grace and inner strength, questioning society’s mores and hypocrisies and finding her own solutions.

In the 1980s, Neena’s flamboyant relationship with West Indian cricketer, Sir Vivian Richards, and the birth of their daughter out of wedlock, was the cause of much shock and awe in Indian society. But Neena didn’t flinch or run away; she raised Masaba as a single mother—as always, up-front about her life choices and their consequences.

In retrospect, she says, “You are blind and in love at that time and you don’t listen even to your parents. It’s a very tough journey and I would not recommend that to others. It’s not correct and it’s tough on the child.”

Today, Masaba is a successful designer. She is now collaborating with her mother on a new venture. Says Neena, “We have a very special connection; we are almost like friends. We fight like every mother and daughter. We have a very normal kind of relationship—she’s my companion now and we go on holidays together.”

She admits, however, that her controversial personal life may have caused her to miss out on getting more good roles in cinema. Many in Bollywood also thought she had retired, since she had moved to New Delhi after her marriage, in 2008, to accountant Vivek Mehra.

But Neena wasn’t done with acting. Up-front and savvy as always, she used social media in 2017 to revive her career. Her post on Instagram read, ‘I live in Mumbai and working am a good actor looking fr good parts to play.’ The move worked. The post got the right attention and down the line, Neena’s career graph went north, especially after Badhaai Ho!

She’s blunt, but not bitter, when she says that in popular Indian cinema, older women are considered dispensable (in her words, kachra, or trash!). In that sense, Badhaai Ho! was a very special role for an older woman. “The fact that the film became a hit prompted other people to take on different things and make films about older women. So that is the trend.”

Currently, Neena has several meaty assignments lined up including Sooryavanshi, Panga, and Gwalior, all with top stars, strong roles, and complex story lines. She’s just signed on a Punjabi film, completed a short Sindhi film, and has still more projects that she cannot discuss yet.

She has directed serials for TV such as Saans, Siski, and Kyun Hota Hai Pyarrr. Does she visualize herself turning film director anytime soon? She laughs, “No! People say if your shop is running well, then why open a different one?” Acting is all that she wants to do, now that she’s getting choice roles. She would like to play a cop someday soon—given her ability to slip into any role with ease, one can well imagine the nuances this talented actor will bring to the role, challenging Bollywood’s top cops like Amitabh Bachchan, Ajay Devgan, and Ranveer Singh at their own game! 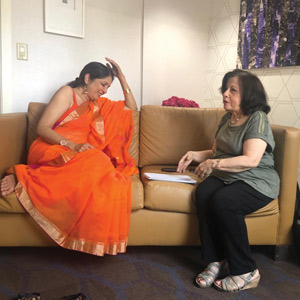 (Right) A lighter moment with author Lavina Melwani during the interview.

Where does her fountain of confidence spring from? Where does she get that never-say-die spirit that is so essentially her strength?

Neena was born in Calcutta in a middle-class family which moved to Delhi when she was a young girl. It was a simple life in Karol Bagh, where the lights would be out by 9 pm. “We used to sleep on the terrace and I had my transistor with me and I used to listen to Vividh Bharti—that’s how I remember the lyrics of all the old songs,” she recalls. “The family would watch the news on Doordarshan and the weekly Hindi film, sitting around the television set.”

Neena was able to harbor bigger dreams because of her education. “The reason I could change myself and adapt was because my mother was educated—she was a double M.A. and she used to work for the Congress [Party] at that time.” Neena completed her Master’s degree from Delhi University and then studied at the National School of Drama. She worked in art films with film and theatre greats like Girish Karnad and Shyam Benegal, but somehow the bigger roles went to her co-actors, Shabana Azmi and Smita Patil. Perhaps due to her personal life, she feels she got negative or smaller roles.

Now at 60, Neena shares some pointers for other older women. She feels women still have a long way to go, but it’s important for older women to feel useful: “The [movement] has started and that is because of economic independence; women are working and I think that’s going to bring about a change.”

She emphasizes that it’s essential for women to practice self-love and look after themselves as they grow older. She loves “whatever I can’t eat much of—spicy street foods like vada pav, pakore, poori aloo, misal pav, and poori chole!” To offset these indulgences, she makes up with healthier food options like rajma chawal, goes for walks, and practices yoga every day.

“No one’s ugly—everyone is beautiful,” she says. “You can sort it all out. It’s ok to be fat as long as you’re healthy. Dress up according to your body and show your best features. I have good legs, so I show them! Be happy, enjoy every moment.” She adds confidentially, “This is how I constantly talk to myself, too!”

What would she do if she was handed the gift of a free day? She says, “I love my home, I love my home food. I’ll just sit at home and cook something, watch TV serials, have a drink, and go to sleep early!”

What gets her through the ups and downs, and does she have a philosophy of life which takes her through rough times? Neena laughs wickedly and says, “I go shopping! I eat rubbish which I’m not supposed to eat and go see a movie, and think, “Kal to accha hoga!” (“Tomorrow will be better!”)

Having gone through the many seasons of life, what is her favorite age, the 20s, 30s, or 40s? Or perhaps, the 50s? Joyful and optimistic as ever, she laughs: “Now! Now! Now is the best time of my life.”

Lavina Melwani is a New York based journalist. She blogs at www.lassiwithlavina.com.
Follow @lavinamelwani and www.facebook.com/LassiwithLavina/