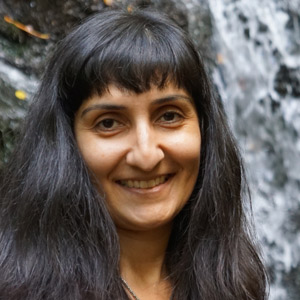 Atlantan Anjali Enjeti juggles, with practiced ease, her multiple roles as essayist, book critic, writing teacher, budding novelist, and mother of three girls. A keen social observer and an engaging storyteller, she’s gaining prominence in the local literary community as a widely published writer. Anjali talks to Khabar about her journey from law to writing, why she views art as resistance, and what motivates her to keep honing her craft, day after day.

We met at a Starbucks in Atlanta’s northern suburb of Duluth. I had arrived a few minutes early, hoping to snag a table in a quiet corner. The coffee shop was packed with high-school students poring over homework on a school night. When she walked in—Uggs, voluminous satchel, baggy sweater over black tights, sporting a casual style evocative of millennials—I assumed she was going to make a beeline for the cluster of high schoolers huddled around two Macs in the far corner. I was wrong. As she walked up to me, I realized she was the subject of my interview that evening—Anjali Enjeti, a prolific writer, mother, and erstwhile lawyer.

Anjali is an essayist and literary critic whose writings on art, social justice, race and identity, parenting, and life in the Deep South have been published in the The New York Times, The Guardian, The Washington Post, and The Atlanta Journal-Constitution, among other publications. After majoring in psychology and women’s studies, Anjali wandered into law, because that’s what people with good writing skills did. Or so she was told by friends and family: “You’re a good writer, you should pursue law school.” Practicing law was very satisfying, but then life intervened, and when she had her first of three children, Anjali found herself taking to writing to overcome the sense of isolation that she felt as a new mother: “I felt inadequate as a mother…I could never figure out why my daughter was crying…now, it seems normal, but back then I felt I was terrible at the job.” Writing about parenting allowed Anjali a creative and productive outlet and soon she found herself writing for parenting journals. “After my second child was born, I quit practicing law and started writing more,” she notes.

Anjali spent her childhood in Detroit, Michigan, before moving to Chattanooga, Tennessee, at age 10. Her mother, a half Puerto Rican, half Austrian nurse, met her father, a Telugu Indian physician, while “delivering a baby together” at an El Paso hospital in Texas. Seeing herself as “mixed race,” she says, “I see myself as a person of color, primarily.” Growing up, Anjali remembers being seen as that brown kid and “not the kid that liked Def Leppard” or enjoyed the everyday pleasures of American childhood.

More than nine years into her family-and-community centered life in Johns Creek, Atlanta’s high-income suburb, Anjali is “more emotionally secure than ever before. … I feel the support of the community around me. I am no longer just the brown person.” Johns Creek is home to a significant South Asian minority, what with its top-ranking schools, new subdivisions, and secure neighborhoods. However, as a writer who is often stirred by issues of inequities and inequalities, Anjali saw beyond the seeming calm and quiet comforts of a bedroom community. In a 2016 essay, provocatively titled “Ghosts of White People Past: Witnessing White Flight from an Asian Ethnoburb,” Anjali asks why diversity-seeking white liberals would relocate from a community that offers all that families seek—good homes, great schools, and safe neighborhoods. 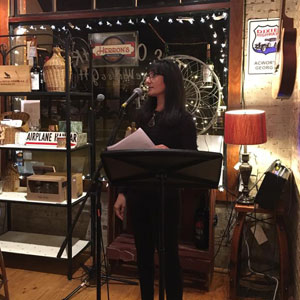 “Somehow white parents’ liberal politics and progressivism do not inform them that the decision to relocate to avoid Asians is racism. They’ve defined the term so narrowly, their own individual acts of prejudice don’t meet it,” she wrote. Some whites decide to move, she points out, because they feel their children wouldn’t be able to compete with Asian kids. I probed her on this—why is a white family’s decision to live in a racially homogenous community racism? Is there not a similar desire amongst South Asian communities—to live in communities where the majority of residents are also South Asian? Racism, Anjali argues, “is prejudice plus power; we (South Asian minorities) don’t have power. We continue to be a small minority—some do well, but some do not. And we may be prejudiced, but we don’t have power, not until we have enough CEOs and elected officials and enough people in positions of power and influence.” Was this article meant to provoke, I ask.

“I write to understand social and cultural phenomena—it might resonate with some people, but ultimately people take whatever they want from my essays,” she replies.

For Anjali, writing is increasingly a form of social activism—a way to engage, provoke, and question ideology, ideas, and power dynamics so that “I can lend my voice to things that matter. If my writing doesn’t contribute in some way to things that matter, then what’s the point?” Indeed, as Anjali continues to evolve as a writer, she finds herself drawn more to writing about social justice issues such as the Black Lives Matter movement. One of Anjali’s ongoing writing projects is about art as resistance. With new and renewed threats to cut public funding to institutions such as the National Endowment for the Arts, Anjali is asking the question, Can art or does art serve as resistance? Can it empower? Can it inform communities to mobilize and engage?

Writing should be transformative, argues Anjali. “I feel happiest as a writer when I am able to take an idea and transform it into something powerful. I will stew and stew over ideas until I see a connection.” When the disjointed ideas seamlessly coalesce in a narrative arc, that is the magical moment when everything clicks and the story falls into place.

Elsewhere, Anjali’s writings have won her much acclaim for their candor, openness to vulnerability, and truth-seeking. In “Borderline” (which ran in Prime Number magazine), she wrote about abortion by weaving a rich narrative around the similarities between her experiences and those of her Austrian grandmother living in World War II Austria. “I started this piece when my daughter was just a few months old, and the essay was published just a few months ago, when she was over nine years old!” Anjali says. As an essayist, Anjali’s writings come together slowly, over months—writing several drafts to get to the central point of her message, asking the question, “Why should anybody care?” And her writing method is a function of the exigencies of everyday life. “My youngest child is in school from 7:30 am to 2:30 pm, so I write when she is in school, and then some more in the evening, after dinner, and after the kids’ bed time.”

Writing is painful, she admits, until she discovers the central point of her story or essay. She brings a rigor to the craft that emerging writers amongst us can definitely draw on. “I force myself to write at least two pages every day and not revise it until I’ve written those two pages.”

Anjali is also a widely published book critic, and her reviews appear in the Sunday Atlanta Journal- Constitution. She was recently elected to serve on the board of the National Book Critics Circle. Speaking of this new role, Anjali describes it as a dream for any book lover: “I get to do what I love best—read, and select the best writing for national awards.” Anjali also has two finished novels, titled Shiva’s End and Parted Earth, which she hopes will get published in due course.

When George Saunders, the celebrated American writer, was asked about the utility of Masters in Fine Arts (MFA) programs, he is known to have said, “Even for those thousands of…people who don’t get something out there, the process is still a noble one—the process of trying to say something, of working through craft issues and the worldview issues—all of this is character-building, and, God forbid, everything we do should have concrete career results.”

Anjali would agree. She has an MFA degree in creative writing from Queen’s University in Charlotte, North Carolina. The MFA, she argues, opened the doors to exploring other forms of writing, but she also concedes that writing as a vocation today has become a function of whether the writer can afford to write. “People with economic privilege are able to go to school to hone their craft and devote more time to writing and getting published. It’s very hard to juggle a full-time job to make ends meet and also write. An MFA is excellent training, but you don’t have to go to school to educate yourself,” she adds. Budding writers can receive support and feedback from writers’ groups and can also access online writing programs that offer financial aid. The Gotham Writers’ Workshop, for example, offers a variety of classes in fiction, memoir, reporting, and blogging in both online and physical classroom settings. In Atlanta, Anjali is part of the Decatur Writers’ Studio, a teaching and learning resource offering intensive writing workshops.

As a resident of Johns Creek, Georgia, Anjali is painfully aware of the pressures placed on immigrant families and children to perform top of their class and to excel in the sciences, as possible entryways to top-notch universities and high paying careers. Anjali argues, “The human connection comes from communicating with one another—that’s not STEM (science, technology, engineering, and math)…that’s art…that’s painting, theater, music, sculpture.” Problem solving, she offers, isn’t just the domain of the STEM discipline; creative people think outside the box, so we need instruction and training in the humanities to nurture creative problem solving. 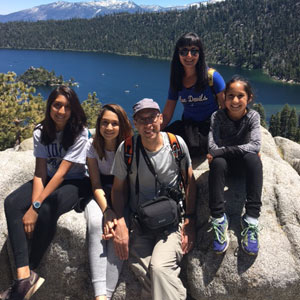 As a lawyer turned writer, Anjali offered this advice to her children: “I’ve told my kids that the reason I quit law was because I’d rather be the least successful writer in the world than the most successful attorney.”

To write is to open oneself up to the outside world and invite the world at large into one’s mind space. Anjali’s work is a window into her life as a person of color, as a mother, as a daughter of immigrants, and as a social activist. To write is to produce art. And art, says Anjali, is everywhere. “It is an everyday phenomenon. It is vital to human survival and intellectual thought. When Trump was elected President, I asked myself if I should go back to becoming a lawyer. But I think I can connect with people better through my writing, and I can amplify others’ voices through my writing, so I’m going to stick to it.”